This article was written by our sponsors at Gray Law Firm – The Personal Injury Professionals, located at 251 West 93rd Street. 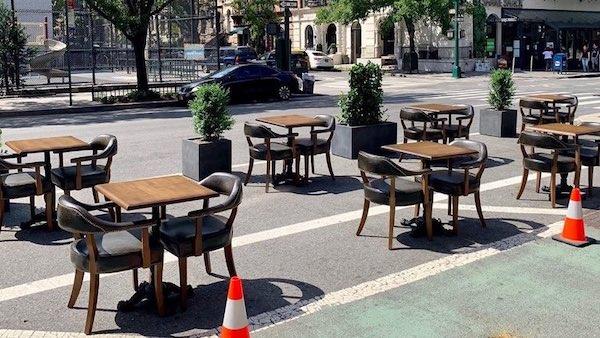 Part of being an injury attorney is perceiving dangers others might take for granted. Even before parking lanes were repurposed as dining spaces under COVID-19 protocols, we worried about getting struck by a bike or an e-bike — often ridden by restaurant delivery people — while crossing a bike lane. On Columbus and Amsterdam Avenues, despite the one-way design of bike lanes, cyclists often come from either direction. Pedestrians need to be hyper-vigilant and remember to look both ways before crossing a bike lane. We also need much better police enforcement. And, of course, if you are a cyclist — stop riding in the wrong direction!

Now added to an already volatile mix of uses, is the danger of a vehicle plowing into a restaurant’s on-street dining area. Indeed, recently we were retained to represent someone who was injured when an out-of-control driver ran a red light, struck another vehicle and careened into and demolished an outdoor dining area on the Upper East Side.

Most on-street dining areas, because they are intended to be temporary and movable, are often just tents or quasi-structures made of flimsy materials. And while some restaurants do a nice job of insulating diners from the clamor and unsightliness of the roadway and provide a decent dining atmosphere, most of these transient structures provide little or no actual barrier between diners and onrushing vehicles.

In addition, the fact on-street dining structures are frequently built on the other side of bike lanes multiplies the perils. Now you have servers, bussers and patrons constantly crossing the bike lane. A patron wishing to use the bathroom, for instance, could blithely step outside the tent and find herself squarely in the path of a 30mph e-bike.

Obviously on-street dining on a city-wide scale is a somewhat dysfunctional ad hoc measure that no urban planner would purposefully design. We applaud responsible restaurant owners for adapting to this situation by taking extra precautions to keep their patrons and employees safe. Some of the measures we’ve seen include: warning signs reminding customers and staff to beware of bike traffic and to look both ways before crossing bike lanes; flashing lights warning bikers and pedestrians of the presence of outdoor dining; and reflective tape and signage on the street-side of outdoor seating areas to increase visibility and warn drivers of their presence—especially after dark.

Nevertheless, as outdoor dining continues, and possibly expands, in the foreseeable future, all parties in this chaotic shared space will continue to have both heightened risk and heightened potential liability. Take the above example where a cyclist crashes into a patron stepping outside a dining structure onto the bike lane and both are injured. The patron might sue the cyclist for negligently riding too fast next to a structure where they knew, or should have known, there to be pedestrian traffic. The cyclist might sue the patron for negligently failing to look before attempting to cross the bike lane. Both the cyclist and patron might sue the restaurant owner for negligently creating a dangerous situation or failing to lessen the danger. And all three parties might sue the City of New York for negligently permitting on-street dining immediately adjacent to a bike lane and for not having spelled-out guidelines.

From a legal perspective, what makes this situation novel is that the concept of right of way, which governs much of how we interact on roadways and bikeways, has been upended. Ordinarily, a cyclist going in the proper direction on a bike lane, at an appropriate speed, would have the right of way. A distracted pedestrian, or a motorist exiting their parked vehicle, who steps directly in front of that cyclist would be held largely responsible for the accident. However, in the context of on-street dining the margin for error has been greatly reduced and that same cyclist would effectively be on notice that anyone, at any moment, might pop out of a dining structure directly into his path. Therefore, the cyclist would be expected to reduce his speed and heighten his awareness. Otherwise, the cyclist, or his employer (if he is a delivery person), might be held liable for damages.

Astonishingly, while the city has issued voluminous outdoor dining regulations, these are concerned mostly with social distancing, disinfecting practices and personal protective equipment, workplace practices, hygiene, screening, etc., with nary a mention of how to manage the shared public space.

Restaurant owners are already overburdened by Covid-19. And ultimately, they cannot control the behavior of patrons, staff, cyclists, or motorists. But restaurant owners can and should take matters into their own hands and employ all available safety measures to minimize risks of having a high-speed bike and scooter lane literally running through their dining operation. Likewise, pedestrians, cyclists and motorists should also exercise extraordinary caution with regard to this extraordinarily dangerous and illogical setup.

“The Little Dancer” Musical Returns to the Upper West Side!