The planned revival of Open Streets on West End Avenue is the work of two area residents who met during the initial run which started in May, but which the DOT terminated in November without explanation.

The return of Open Streets was initially going to begin Saturday, December 12, but has been indefinitely delayed due to inclement weather in the forecast.

Speaking with an organizer of the West End Ave Open Street Community Coalition, the initiative they recently launched to bring the program back, they told ILoveTheUpperWestSide they wanted “the best possible conditions for the launch,” and with the holiday season approaching, it’s possible the opening may come as late as January now.

The streets included have also been changed. The original stretch was from 87th to 96th Streets. Now the roadbed on West End Avenue from 88th to 95th Street will be ‘open,’ providing pedestrians and cyclists greater social distancing options during the COVID-19 crisis. The change was made to make way for bus travel.

The WEA Open Street Community Coalition ran a survey over the summer that collected over 460 responses with 60% of people wanting to keep Open Streets year-round, while 25% wanted the program ended. More than half of the respondents said they would promote the program to their friends.

The program was initially met with mixed emotions and some confusion. Some people felt it wasn’t being utilized enough. The NYPD was supposed to be monitoring the barriers, but officers weren’t always around; so drivers would move, even knock the barriers down to get through. Clearer signage was noted as a necessity as a West Side Highway exit is nearby, and people not from the area might not be aware of what’s taking place. Others rejoiced in having a new open space to walk through and play in during the peak of the pandemic’s first wave. 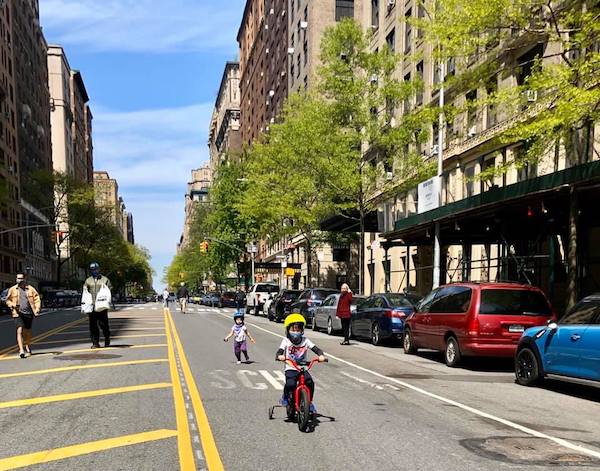 Recognizing the challenges while seeing lots of potential for a program still in its infancy, the organizers of Open Streets’ revival reached out to NY Assembly Member Linda Rosenthal, who penned a letter to Mayor Bill de Blasio to bring it back to the Upper West Side. In less than a month, they’re seeing progress towards a new start date.

Speaking about Open Streets with the Eliopoulos family from West 71st Street, husband and father James Eliopoulos, 51, told ILTUWS that he thinks “there are many drivers including [himself], taxis and Ubers who don’t see signs for the [Open Streets] and drive through them as [he] did. Great idea, better PR needed.”

Mother and wife, Rosie Eliopoulos, 47, shared similar sentiments on the need for better signage and PR. “It definitely gives everyone a chance to get outside and enjoy the neighborhood and the weather, having some space and being able to see their neighbors and friends, even if at a distance.” Their 9 year old son Benjamin said he thinks “it’s good and bad because there will be less pollution from less cars but there will also not be as much social distancing.”

Others didn’t see much upside, like one reader who replied to the ILTUWS November article announcing that Open Streets would be cancelled. “Good riddance. Another brilliant elitist idea ends up in the trash bin. If you can’t fathom this establishment, it goes like this: Let’s shut traffic down at beautiful West End with the wide sidewalks and make it use nasty, grimy Amsterdam and Columbus instead.”

Another commented that “It seemed ridiculous, but understandable in the warmer weather, but now that the weather is getting cooler those 3 people that are walking can walk on the sidewalk just as well. If I sound like a disgruntled car owner, I am. Now i can freely drive around looking for a parking space.”

The WEA Open Street Community Coalition created a Volunteer Sign-Up form asking for volunteers to set up and maintain the barriers during the planned operating hours of 10am-4pm on weekends. The NYPD will no longer be monitoring the streets. Organizers are seeing if the community will come together to support the cause if they care about it staying this time. While a start date is still TBD, the form is still live in case it is announced soon.

One of the organizers discussed the various types of activations which could be launched within the re-launched, pedestrian-only stretch of West End Avenue. Beginning March 1, they indicated that popup art and music events may be hosted, and the survey saw a lot of interest in food-related events. While this is not currently on the agenda, we’re told it could be possible down the line.