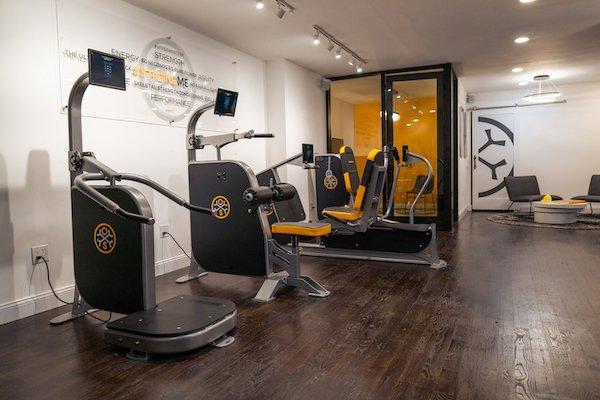 OsteoStrong, an integrative health and wellness center, with a focus on improving the musculoskeletal system, recently opened at 245 West 72nd Street, between West End and Broadway.

OsteoStrong – a franchise model company – features a studio with four machines and onsite coaches who guide participants through a circuit workout which is designed to strengthen bone density. The UWS franchise owners tells us the workout uses “adaptive responses” everyone has to strengthen bones which will help with muscle gain.

Membership is monthly, and it’s a once-weekly, fifteen minute session by appointment only.

The concept came about from a PHD who wanted to find alternatives to drugs when his mom got osteoporosis.

In addition to people who have osteoporosis, OsteoStrong’s clients include competitive athletes, as well as people who want to take preventative measures to avoid losing bone density down the line.

The company has two other NYC locations, which are in the Upper East Side and Flatiron. They also have locations all over the country; as the service they provide was deemed essential, they were able to keep these open throughout the pandemic. OsteoStrong also has locations in Western Europe, Iceland and Australia, with locations opening soon in New Zealand, Canada, and several European counties.

Because of the nature of the circuit-like workout, the UWS franchise owner tells us they generally have a limited number of people in the studio at once.

What is Eleanor Roosevelt Doing on the Upper West Side?