Home
Events
Philharmonic in the Park 2018

Philharmonic in the Park 2018 is happening in Central Park on June 13th. Pack a picnic and bring some friends along to enjoy one of the free highlights of the summer. Read on to check out this year’s innovative repertoire.

The free annual concert takes place in Central Park’s Great Lawn on June 13 at 8pm. The music will last for one hour and a half with no intermissions in between. You can access the lawn through the park’s eastern edge by 79th street or 85th street at 5th avenue. You can also make your way to the concert by entering through the park’s western edge by 81st street or 86th street at Central Park West. James Gaffigan directs the orchestra and Frank Huang is the violinist. 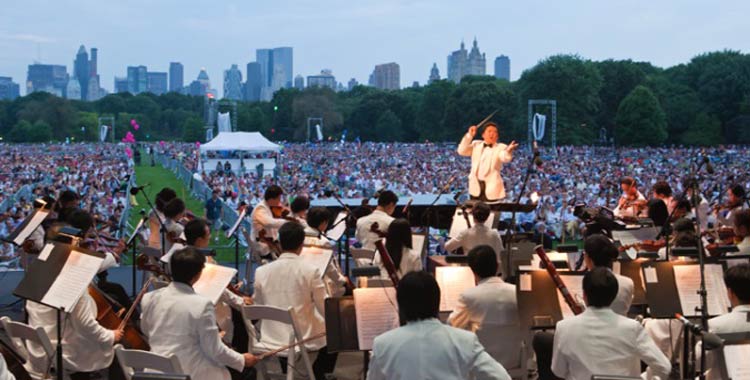 Gaffigan is one of the most revered American conductors working today. He’s the chief conductor of the prestigious Lucerne Symphony Orchestra and has also directed the Orchestree de Paris, the Salzburg Mozarteum Orchestra, The Cleveland Orchestra, and many others.

Frank Huang is a renowned violinist who finished in first place at the Walter W. Naumburg Foundation’s Violin Competition in 2003. Huang has also made appearances on TV in shows such as NPR’s Performance Today and ABC’s Good Morning America. He also won a Grammy Award when he was the first violinist of the Ying Quartet.

The program for the Central Park concert is varied and eclectic. It includes Saint-Saens’s Bacchanale theme from Samson and Delilah and Leonard Bernstein’s Three Dance Episodes from the Broadway musical comedy “On The Town.” It also includes Rimsky-Korsakov’s Scheherazade which is inspired by the legendary tales of 1001 Arabian Nights.

The program also includes two compositions from young students that are part of the Very Young Composers (VYC) initiative. The VYC initiative is dedicated to those students who are in grades 1 through 5. It aims to showcase the work of children from diverse backgrounds and to also encourage them to create their own compositions. Their creations will be displayed live in the parks for the very first time this summer.

One of the student’s compositions is called Harlem Shake. The piece was created by 10 year old Camryn Cowan and it seamlessly combines 20’s jazz with NOLA hot jazz. The other composition is called Boogie Down Uptown by Jordan Miller. It’s sound captures the energy of roaming through the streets of Upper Manhattan for the first time. The compositions of Jordan Millar and Camryn Cowan are both inspired by the neighborhood of Harlem.

Didi and Oscar Schafer present The Philharmonic in the Park concert series. The annual festival is celebrating its 53rd outing. It is also one of the longer running concert series of its kind in NYC. Other concerts will be taking place around the city’s five boroughs including Brooklyn’s Prospect Park and Cunningham Park in Queens. The NYC Department of Cultural Affairs and the New York State Council on the Arts also support this free cultural arts series.

Each concert, except for the one taking place in Staten Island, concludes with a fiery spectacle of fireworks. More than 15 million residents and visitors alike have experienced this wonderful summer tradition.

Memorial Day 2018 on the Upper West Side