Home
Arts & Entertainment
QUIZ: How Well Do You Know Your Upper West Side Statues?

When people think of sculptures and statues in NYC, the Statue of Liberty and the lions in front of the main New York Public Library are likely the first ones that come to mind.

However, neighborhoods including the Upper West Side have quite a number of unique monuments.

A few from the UWS were included in my article about Riverside Drive, but in this piece, I’d like to challenge our readers with this quiz on the identity of some of the other statues and sculptures on the Upper West Side.

My ten question brainteaser includes photos of statues and sculptures as well as images with a few details of each given structure.

Some of these works of art have been in our midst for a long time and are hopefully here to stay.

Others have been here on a temporary basis, but observant Upper West Siders are likely to have seen them.

Your task is to answer some questions about a given monument and the incentive might be that upon completion, you might’ve learned a thing or two about these awesome works of art.

Plus you will have bragging rights for successfully acing (or at least completing) another iLovetheUpperWestside quiz!  If you missed the first one, it focused on the Upper West Side during the 1980s.

1. In 2017, there was a sculpture of a hippo gazing at Lincoln Center from the vantage point of Dante Park. She is specifically looking at the building where the ballet is performed. 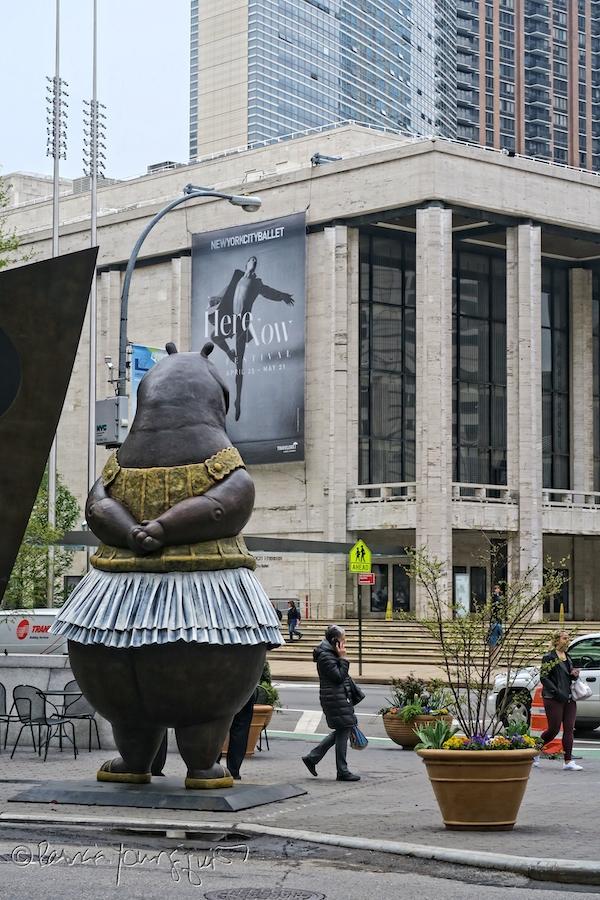 The visiting Hippo Ballerina is no longer standing in that area of the UWS. But when I saw her in 2017, I imagined her to be wistful about opportunities of performing at Lincoln Center. 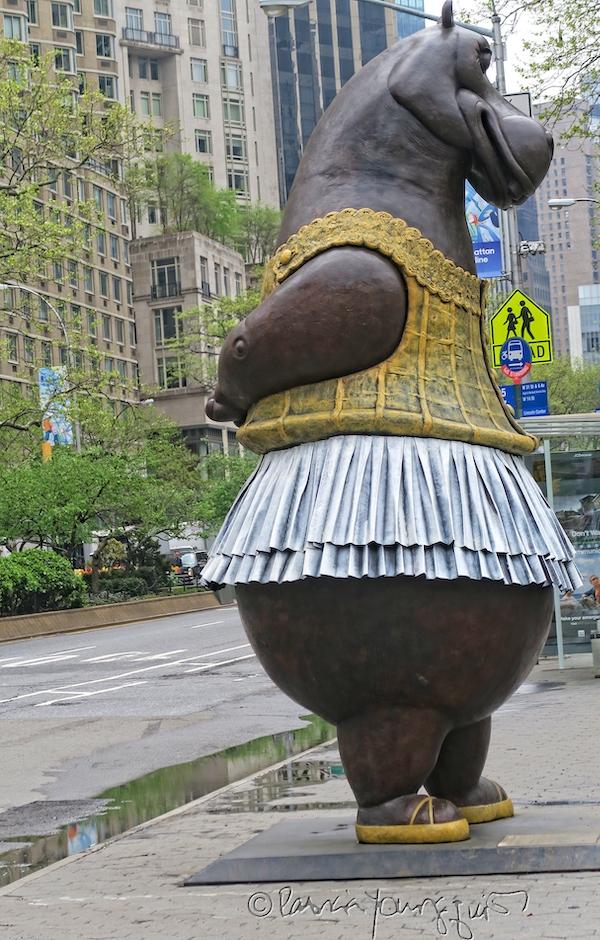 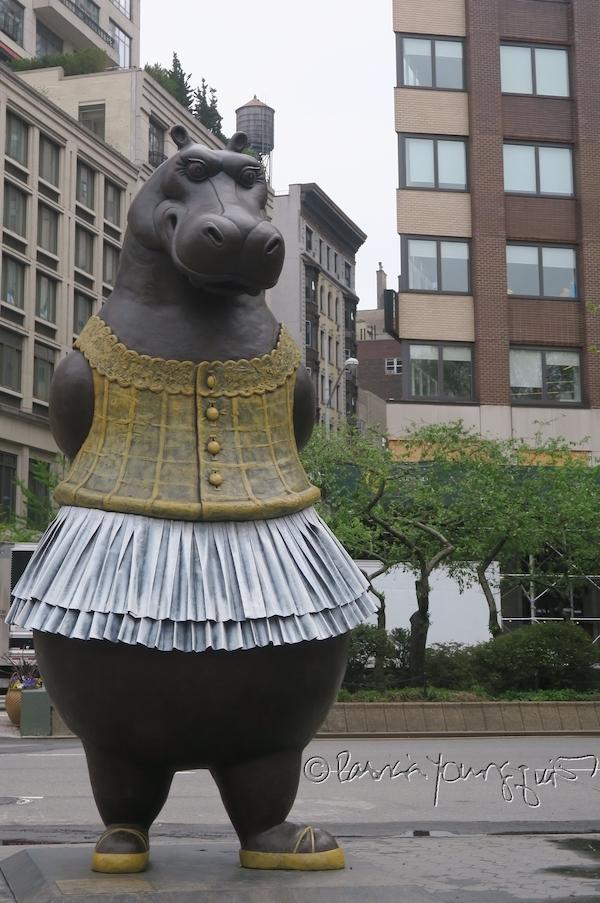 How about you, dear readers? Did you get a chance to see her and if so, what character or characters did you think the sculptor, Bjørn Okholm Skaarup, had in mind when he created her?

Hint: he had two in mind when he did this sculpture. One is from a famous painting; the other is a famous character in the world of animation.

Click here for answer
Skaarup’s hippo is partially based on a much-talked about sculpture from the late 19th century: Edgar Degas’ Little Dancer and his sculpture was also inspired by the “Dance of the Hours” sequence in Disney’s Fantasia, which featured dancing elephants, crocodiles and hippos. More information can be found on Skaarp’s You Tube Video.

2. The sculpture seen in the following image is also a hippo! 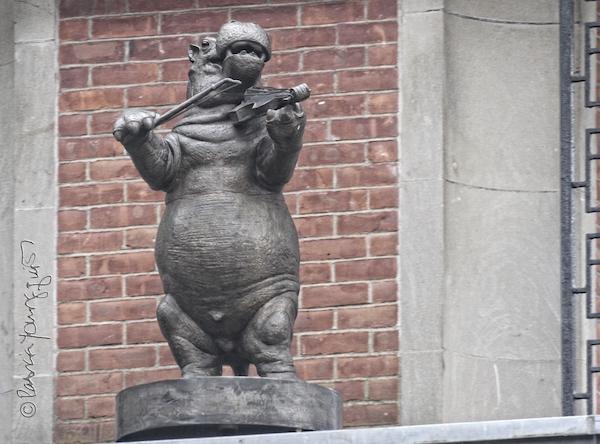 As you can see, this one is playing a violin! Where is this piece of art located?

Hint: this animal replica helps us keep time when we are near the zoo in Central Park.

Click here for answer
The hippo seen here is part of Central Park’s Delacorte Clock. This musical clock hovers above the arcade between the Wildlife Center and the Children’s Zoo. 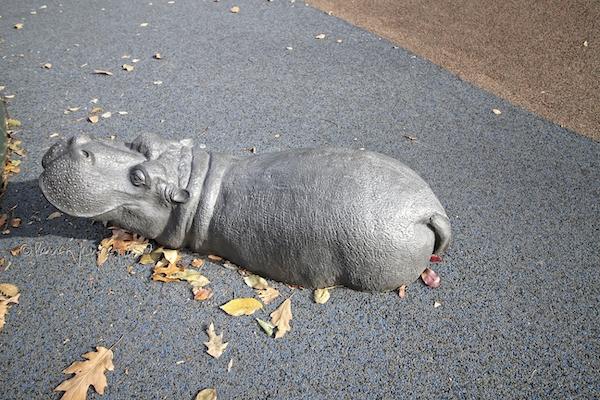 What is the name of the playground where this one is located?

Click here for answer
The hippo seen here is one of a few located at the Safari Playground – where children can climb over, under, and around sculptures of hippopotamuses in the “river” of the playground floor.

It is on the top of a hill with views of the Reservoir and is the only playground in Central Park that doesn’t include traditional playground equipment like slides, swings, or a sandbox.

4. At this point, I think it’s good to note the next sculpture may prove Cyndi Lauper’s point that “girls just wanna have fun.” 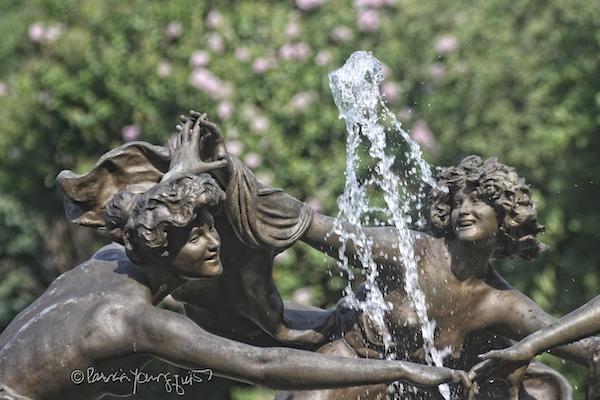 Where is the location of the monument depicting these joyful young women?

Hint: the place to find this masterpiece is in a northern area of Central Park.

Click here for answer
This sculpture, Walter Schott’s, Three Dancing Maidens, is surrounded by benches and depending on the season, luxurious blooms can be found there as it is within The North Conservatory Garden in Central Park.

5. My fifth question concerns the location of a Northern cardinal who is attempting to drink water from a “saucer” that is part of this sculpture in Central Park. 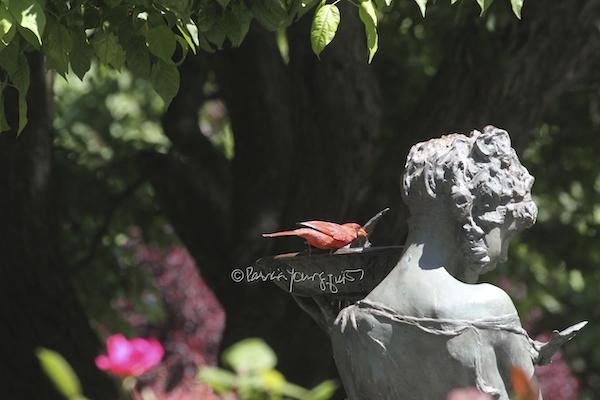 Where is this sculpture and who does it honor?

Hint: it’s in the same vicinity as the sculpture in the previous question and is dedicated to an author known for her children’s books.

Click here for answer
The sculpture and fountain where a cardinal is either bathing or taking a drink is also located in Central Park’s Conservatory Gardens.

This work of art honors the well-known children’s book author Frances Eliza Hodgson Burnett. Some of her books include That Lass o’ Lowrie’s (1877), Little Lord Fauntleroy (1886), A Little Princess (1905) and Secret Garden (1910).

6. Onward we go (but still in Central Park)! The sixth question is, who is the man depicted in the statue seen in the following image – and where is it located within the park? 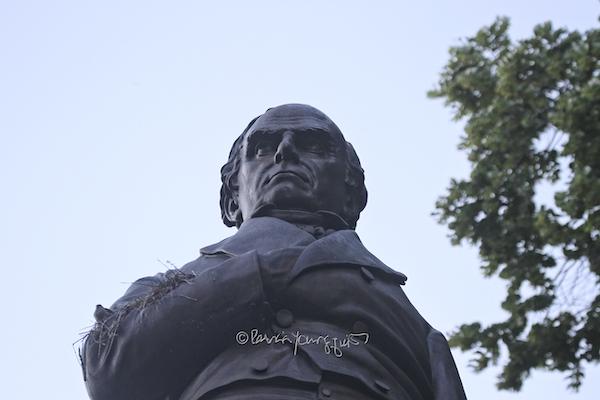 Hint: he was well respected in government and his monument is near a crosstown thoroughfare within Central Park. Moreover, sparrows build their nests within the statues arms.

Click here for answer
Daniel Webster’s (the statesman) statue. The monument was commissioned in the 1870s to be installed along Central Park’s Mall. It was ultimately installed along the Drive at 72nd Street due to size restrictions. After all, these are its physical characteristics: H:14’; Pedestal H: 20?; Weight: 6 tons; Pedestal weight: 125 tons.

7. This next question has to do with the sculpture of this dog in Central Park: 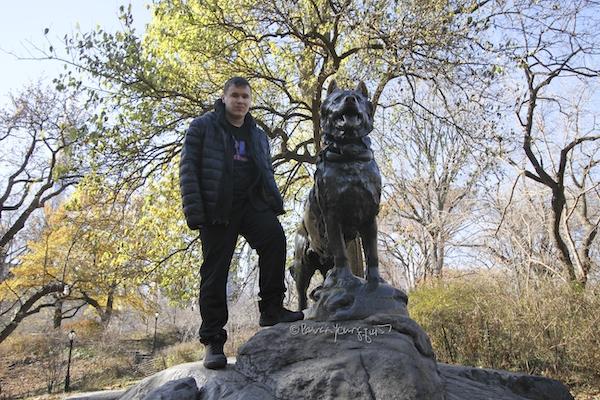 What is the dog’s name and what is he known for?

Hint: his name rhymes with the name a group of people known as Malto, who are a Dravidian-speaking ethnic group. Most Dravidians are found in South India. Moreover, the dog depicted in the sculpture was instrumental in saving lives.

Click here for answer
Balto is this dog’s name. He is known for his role in helping those affected by a January (1925) diphtheria outbreak which threatened the children of Nome, Alaska. Twenty sled dog teams ultimately relayed the medicine through blinding snow and subzero temperatures, with an intrepid Siberian husky named Balto completing the final 53-mile leg of the journey. This dog’s actions made him an overnight celebrity and the artists of NYC were adamant about honoring him. Frederick G. R. Roth’s sculpture was dedicated on December 17 of that same year, 1925. The real Balto, along with his musher Gunnar Kassen, attended the ceremony, making Balto the only Central Park statue to have its honoree present at the unveiling.

8. Question eight takes us out of Central Park as we head back west and slightly north of where the Hippo Ballerina once stood.

In 2018, sculptures wearing these shoes were placed in the neighborhood.

Because it’s been a few years since these sculptures were at this location, it might be difficult to remember the shoes they wore — unless you are someone who is a shoe-person! Hence, here is a full body shot of these sculptures; who are the subject of the next artwork in question.

The question for you is, where were they located?

Hint: it’s near a subway stop.

Click here for answer
The location of this sculpture was near the 71st Street entrance of the 1-2-3 trains at 72nd and Broadway. They were titled In Sync and were part of six monumental sculptures on the Broadway Malls from 64th to 157th Street between April 2018 and February 2019.

9. At this point, for our ninth question, we head further west:

As you can see, this next image features a sculpture of a bird. 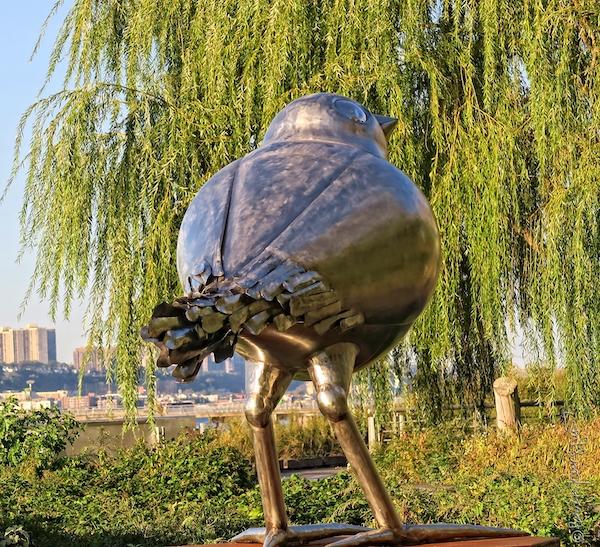 Where was this located and what was the name of the installation that it was a part of?

Hint: this sculpture was included along with seven others during a once annual event sponsored by The Art Student’s League.

Click here for answer
This sculpture known as Bird of Glory and Praise was created by Shelia Berger and was part of 2016’s Model to Monuments’s sculpture exhibit, an event which was sponsored by The Art Student’s League. 2016 marked the sixth year for this annual exhibit, and evidently this was to  be the last one!

10. This fact brings us to the final question which is in three short parts.

Part 1: Prior to Berger creating a bird-themed sculpture, for the aforementioned Model to Monument 2016 venue, artist Akihiro Ito also created a fauna-themed one.

Hers was included during another time period of an M to M exhibition.

Ito’s work of art was made out of wood and titled Forever. 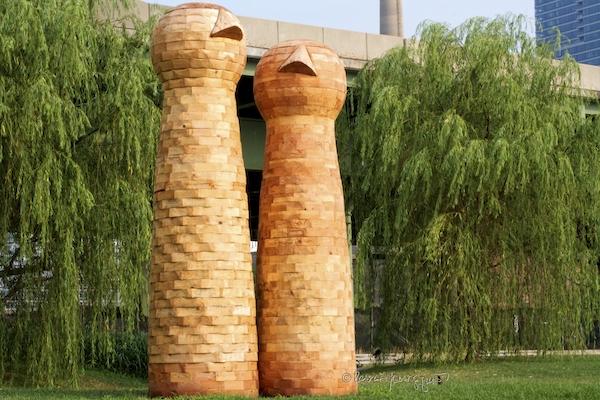 What time period was this work included in the exhibition?

Click here for answer
It was there in the 2011-2012 cycle of the Model to Monuments exhibition.

Part 2: Furthermore, and also prior to Berger creating her single bird sculpture, Selva Sanjines, another artist, built a pair of fauna-themed ones.

Her work of art was also included within what used to be a yearly exhibition in Riverside Park South. The art work I’m now referencing is featured in the next photo, showing you how it appeared in that installation. 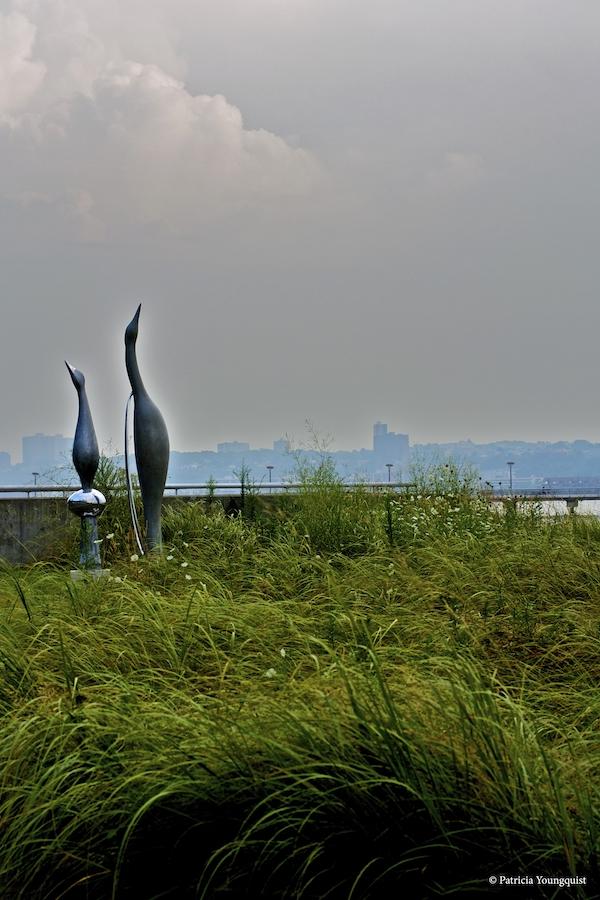 What time period was this artist’s work featured in the event?

Hint: during the time period Sanjines’s birds were featured; the exhibit had a subtitle, From Past to Future: M2M. Also remember, the entire span of the annual event was only from 2011-2016.

Click here for answer
Same answer as part 1: it was there in the 2011-2012 cycle of Model to Monuments’s exhibition.

Part 3: Since I started my questionnaire with a ballerina (the hippo sculpture), I’ll end it with another ballet dancer. 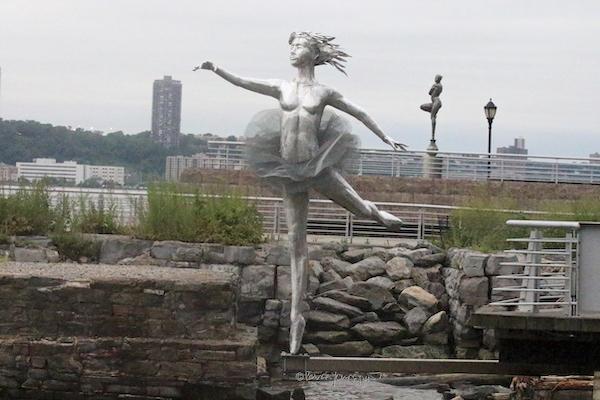 This structure, titled A Frolicking Stray, was created by John N. Erianne and was also in a M to M exhibition!

Which time period was that?

Same hint: remember the entire years of the annual event were only from 2011-2016.

Click here for answer
The ballerina was there in 2013.

An Open Boulevards ‘Kickoff’ at 107th and Columbus Ave