Palmer Smith wrote her first short story under the shade of the Elm trees along the Bridal Path in Central Park. The park is where she’s found solace amidst the hustle and bustle of the city; it’s also the inspiration behind an entire section of her newly acclaimed book, The Butterfly Bruises, published by London-based Press Dionysus. 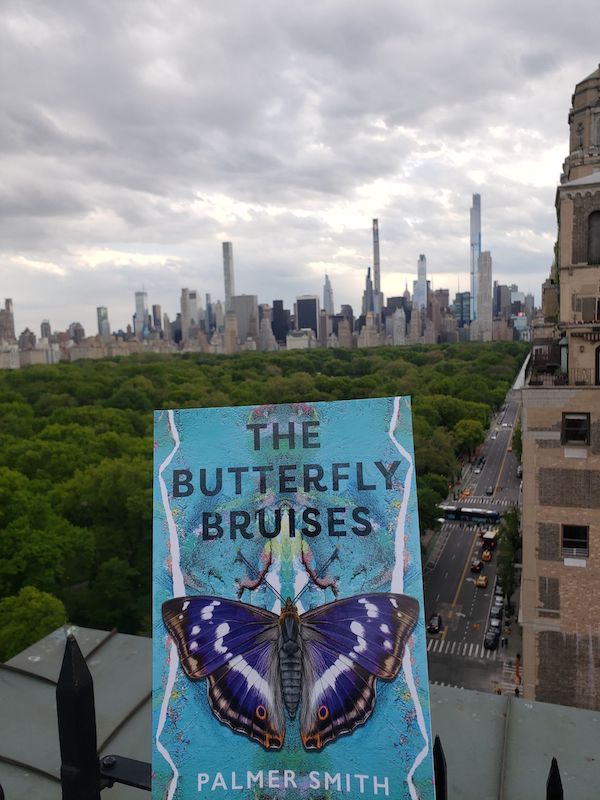 Born in NYC to a southern mother, Smith attended Convent of the Sacred Heart as a child and Sarah Lawrence for her Bachelor’s Degree. In the summers, her mother packed up their car and drove Smith and her brother down the east coast to North Carolina, South Carolina and Florida to visit their many relatives.

This has shaped her unique perspective and identity – one split between the Northeast and the Southeast. Her book is divided into multiple sections separated by the region, animals and oceans, time and themes of transformation. Smith is most excited about the section entitled “Symbiosis,” which explores the relationship between humans and nature.

The section she hopes New Yorkers will resonate with most is entitled “The Dollhouse on Fifth Avenue,” which consists of poems about nightlife in downtown Manhattan, the aftermath and childhood perspectives of 9/11, a meditation on the FDR, and walking on Amsterdam Avenue in the wintertime.

In “The Great Lawn Spring,” Smith comments on the imagery of Central Park as she writes, “…willow leaves caress the blades of evergreen grass clinging to sporadic wildflowers/ and weeds…such misfits they are. But perfect for an animated park such as mine/ where every alluring and trash-eating animal enjoys a patch of grass to sunbathe in/ on a Sunday as they catch up on the culture section of The New York Times.” The Butterfly Bruises has been praised by bestselling novelist Mary Morris.

Morris states that Palmer “…takes risks with these poems and stories, experimenting with form, allowing the words on the page to transcend themselves. This is deep, moving work.”

Smith will be in Manhattan this summer promoting her collection, giving multiple readings and attending signings throughout the five boroughs and Long Island throughout the second and third weeks of August.

The Butterfly Bruises is available for purchase at Shakespeare and Co at 2020 Broadway (between 69th and 70th Streets) and at The Corner Bookstore at 1313 Madison Avenue (at 93rd Street).

It can also be purchased at thebutterflybruisesbook.com, where you can learn more about Smith and her other work.

Chef Eliot Brings the Party to You!