In a recent Tweet, the Riverside Park Conservancy reported that the 59th street entrance to Riverside Park South will be closed for approximately four months in order to allow for construction and improvements to be made. This closure comes following the damage inflicted by Hurricane Sandy, in late 2012. 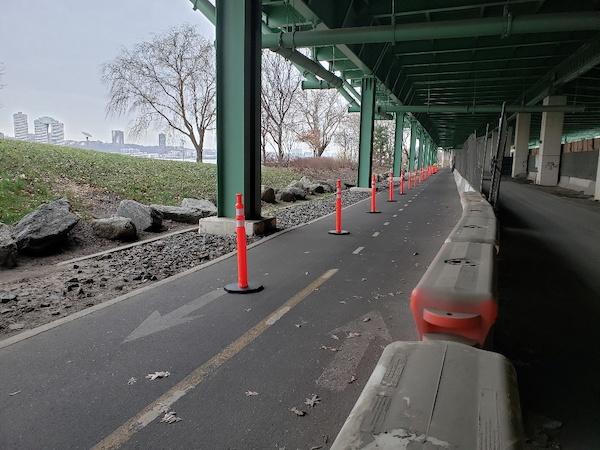 Hurricane Sandy, which battered tons of parks across the New York area, damaged hundreds of trees in Riverside Park alone. Over 40 mature trees were completely destroyed, and the trees that fell crushed steel fences in multiple locations throughout the park. Low-lying riverfront areas along the length of the park were underwater. Additionally, electrical systems suffered extensive damage.

Years later, the park still seems to be repairing areas damaged from the massive hurricane impact. In the social media message, the park conservancy added that there is an alternative pedestrian walkway along the bike path. The Federal Emergency Management Agency, or FEMA, will be finding the repairs.

The tweet has garnered quite a few replies since its posting, most of which are of concern. Of those who’ve replied, some have asked if pedestrian and bike traffic will be prohibited along the closed section, and to what extent. Others have vocalized the fear that there may not be enough space for pedestrians to walk along the bike pathway, especially when the warm weather comes. The park has had past incidents with pedestrians being struck by bike traffic.

The Riverside Park Conservancy provided some responses, mainly that the bike path to the North of 59th street will still remain open. And, that despite concern over the crowded pathway, the road to the east of the bike path/temporary bypass is currently used by construction vehicles. So unfortunately an alternative is not available.

Additionally, some people asked if bicyclists will be required to dismount for the 1/4 mile closure. The park clarified that the parks department will not be asking cyclists to dismount, but that everyone should proceed with extreme caution while the entrance at Riverside Park South remains closed.