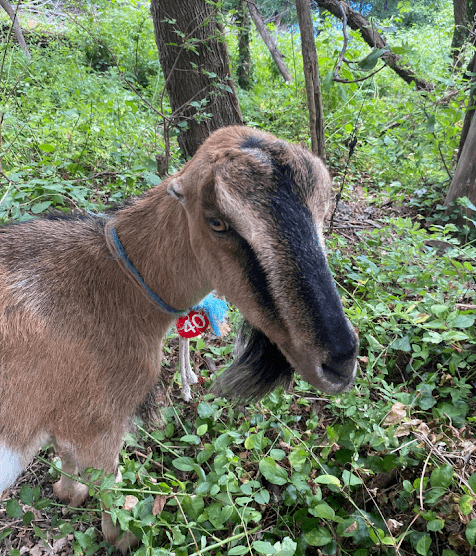 Riverside Park Conservancy’s four goats – Big G, Cheech, Elenor, and Skittles – are participating in a talent show called Riverside’s Go(a)t Talent, and the results will be announced at a public ceremony on August 26. Then, the goats will head back upstate.

The festivities will take place at 120th and Riverside Drive on Friday, August 26 beginning at 11 a.m.

The winning goat will be presented with an award and a bouquet of weeds. Speeches given by prominent figures will follow.

With an exciting arrival on June 29, the Riverside Park goats got to work immediately, eating invasive species and poison ivy.

“This year’s goats were incredibly talented and did a great job to clear out the sloped terrain,” said Roxanne Roth, Manager of Park Operations. “In fact, we’re pleased to share that the goats completed their work ahead of schedule, and will end their summer internship early.”

The now-annual tradition of online “goat voting” kicked off earlier in the week. All goat fans can review the goats’ many talents (eating included) and vote for their favorite ‘intern’ at riversideparknyc.org/vote. Voting will close on August 25, and the results will be announced the following day at the ceremony.

With many votes already cast, each goat-testant has a dedicated fanbase. But who will come out on top, and be crowned The G.O.A.T. of 2022?