Mama’s Too was just named #2 in Grub Street’s “Absolute Best New Square Slice of Pizza in New York!” Mama’s Too, which has a 4.5 out of 5 on Yelp and tons of enthusiastic reviews, opened in late last year at 2750 Broadway, between 105th and 106th Streets.

What makes these square slices so good? Mama’s Too owner Frank Tuttolomondo says he’s “trying to bridge the gap between Roman-style pizza al taglio and New York squares”. Clearly, Tuttolomondo has hit the nail on the head because these slices are catching the eye of culinary connoisseur all over New York City. 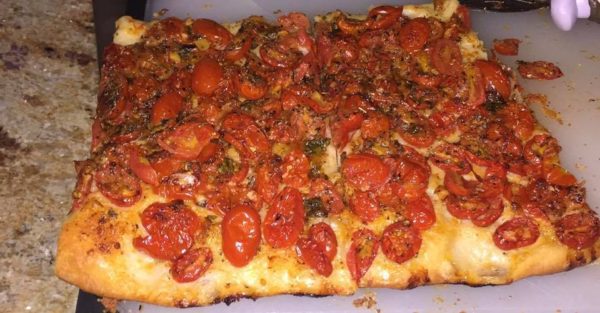 Mama’s Too opened in December of 2017, and has already received several articles worth of praise by Eater and Gothamist in addition to Grub Street! The square slice is simultaneously crunchy, chewy and flavorful. Grub Street says of the slices: “the cheese-lined upper edges are crisp and bubbly, its crumb springy and tender. And the toppings? Uniformly excellent and generously applied, with a natural-casing pepperoni that will knock your socks off.” Okay, we’re hungry now! These square slices sound like everything you want out of a slice of pizza!

Mama’s Too also prepares round pies and offers some counter seating and takeout. Walking towards Amsterdam Avenue, you’ll find Mama’s Too older sibling Mama’s Pizza on the Northeast corner of 106th.

Mama’s Too is open from 11am-11pm daily at 2750 Broadway. Go check out the pizza square slice everyone is talking about!

Check out the article by Grub Street.

For more in dining on the Upper West Side, sign up for our newsletter!

LPQ To Replace Maison Kayser at 76th and Broadway