Home
Community
The Upper West Side Is Getting A Sesame Street?!

Yes, there may soon be a Sesame Street on the Upper West Side.  Community Board 7 just published the topics of discussion for their next meeting, which will be held on October 2nd. And one of those topics is a request to assign the southeast corner of 63rd and Broadway a secondary name: Sesame Street!

According to a 2009 article by WNYC, Mayor Bloomberg declared November 10th, 2009 “Sesame Street Day” to celebrate the 40th anniversary of the children’s programming empire. And he temporarily renamed the corner of 64th and Broadway “Sesame Street”. 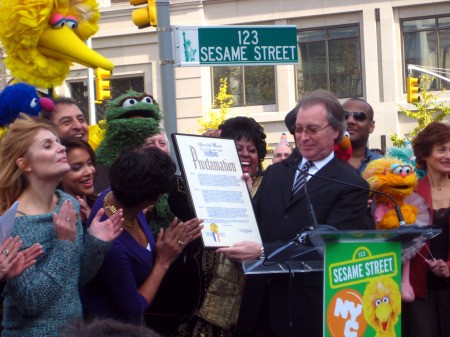 Sesame Workshop, a non-profit educational organization, is located at 1900 Broadway (between 63rd and 64th), so their hopeful new street location makes sense.

It sounds like the request is for the street to be renamed permanently, but we’ll update this post if that’s inaccurate.

And for those of you who noticed: the 2009 temporary street naming was apparently on 64th Street.  And the new proposal is for the southeast corner of 63rd Street.

I’m not sure if one of the articles is inaccurate, or if Grover just wants to be closer to the Time Warner Center. But these fancy muppets clearly like the Lincoln Center area.