Home
Events
Shakespeare In The Park : Free Outdoor Theater on the Upper West Side

Shakespeare In The Park is an Upper West Side institution!  Read on to find out what’s in store each year!

[dropcap style=”font-size: 60px; color: #9b9b9b;”]E[/dropcap]very summer, New Yorkers and tourists alike flock to the Delacorte Theater in Central Park for the opportunity to see stars of stage and screen perform Shakespeare under the summer skies. This time-honored tradition of presenting FREE Shakespeare in Central Park is celebrating its fiftieth anniversary. Produced by The Public Theater, these beloved productions run for approximately one month and often feature A-list actors.

This season includes one play and one musical. The first production will be The Comedy Of Errors, starring Jesse Tyler Ferguson and Hamish Linklater as one set of twins. TV sitcom fans will know and love Ferguson for his role as the uptight lawyer on the Emmy-award winning show Modern Family. Linklater will be familiar to television audiences from his role as Julia Louis-Dreyfus’s brother and roommate Matthew on The New Adventures of Old Christine. But these two versatile actors are also seasoned stage performers. I saw Ferguson as Leaf Coneybear in the William Finn Broadway musical, The Annual Putnam County Spelling Bee, and I saw both Ferguson and Linklater in The Merchant Of Venice, which was a part of the 2010 season of Shakespeare In The Park and also starred Al Pacino. This highly anticipated production of The Comedy Of Errors will be directed by Daniel Sullivan and will run May 28 through June 30, 2013. 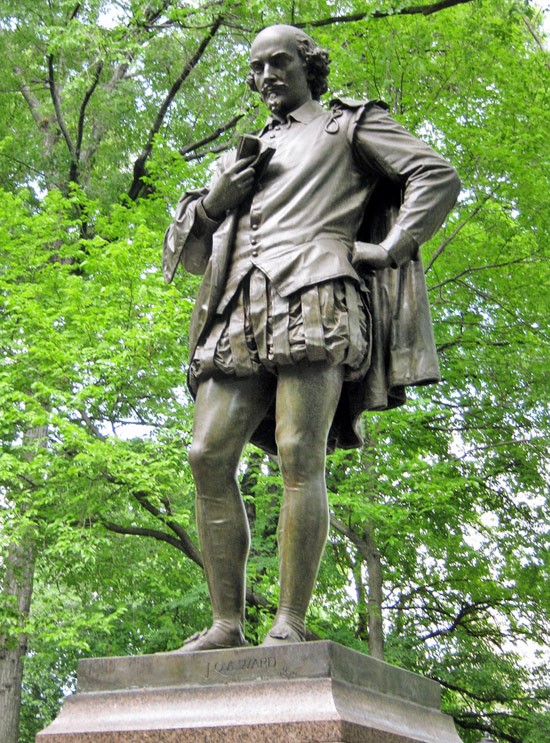 The second production in the 2013 season will be Love’s Labour’s Lost, A New Musical. This new musical adaptation of Shakespeare’s comedy was written and composed by Michael Friedman and Alex Timbers, who reunite after creating their award winning Broadway show Bloody Bloody Andrew Jackson. Timbers will also serve as director. The Shakespeare In The Park production will be the premiere of this contemporary musical and will be playing July 23 through August 18, 2013. Casting for this show has not yet been announced.

Tips for Getting Tickets

Yes, the tickets are free, but acquiring them can be a tricky process. The most widely known way to obtain tickets is the free lineup system at the Delacorte Theater on the day you want to attend the performance. You can get two tickets per person. This method can require a great deal of patience and the acceptance of getting very little sleep.

My advice from personal experience: Go early and be prepared. Plan to get there VERY early (like in the middle of the night!), bring chairs or blankets to lie on, plenty of snacks, games, and someone you don’t mind hanging around with for a LONG time. The tickets will be distributed between 1:00pm and 3:00pm. If possible, plan to go home take a nap after you get your tickets, so that you can be alert enough to enjoy the show that night.

If you are available during the first week of the run and especially on a weekday, your chances are better. There is also a possibility of procuring tickets using the Virtual Ticketing system. If you do win tickets using the online procedure, be sure to pick them up by 7:00pm. If not, then it is bye-bye tickets! Which leads me to the third option, the stand-by line. People generally start lining up around 4:00pm for stand-by. At 6:00pm the stand-by line starts receiving tickets at the box office. These are tickets that were returned during the day. If someone has not picked up their online tickets by 7:00pm, their tickets will be distributed to the lucky stand-by folks as well. Then there is another batch that goes out at 7:30pm, which is from the outer borough tickets holders that missed their pick-up time. That is the fourth option: Travelling to a different borough. There are specific days that will have a free lineup in boroughs outside of Manhattan. These lines are not nearly as highly populated as the Central Park line, giving you a better chance to get tickets, and in a more civilized manner. Check the website for details as the season approaches. If you don’t mind spending the money, sometimes Shakespeare fans will get the highly coveted tickets via Craigslist, or if you would like to support Shakespeare in The Park, it is also possible to acquire tickets with a tax-deductible financial contribution.

Before the show, or while taking turns with your buddy as you wait in line for your tickets, you can grab a bite at Public Fare, the casual café at the Delacorte Theater. Sandwiches, salads, hotdogs, and sweet treats are available at the counter and will satisfy your hunger if you didn’t get a chance to pack a picnic.

For more information on the shows, getting tickets, and supporting this incredible Upper West Side summer event, please visit ShakespeareInThePark.org

St. Patrick’s Day on the Upper West Side