Home
Community
The Story of The Soldiers’ and Sailors’ Monument

Tucked among trees at the foot of 89th Street and Riverside Drive stands the Soldiers’ and Sailors’ Monument, completed in 1902. Made of white marble mined in Vermont and standing 100 feet tall with 36 foot columns, the monument is both beautiful and imposing.

It bears many of the same characteristics as its fellow Riverside Park memorial, Grant’s Tomb, which was completed just five years earlier. Although it often draws less attention than Grant’s Tomb, the 1893 decision to build a monument dedicated to the Union soldiers of the Civil War carried significant weight.

The committee in charge of the design and location consisted of the Mayor, President of the Department of Parks, Commissioner of Public Works, and the military head for the state, among other powerful names.  Columbia graduate and architect Charles Stoughton and his brother, Arthur, were awarded the main design job while Paul Emile Marie Duboy, architect of the Ansonia building on 73rd Street and Broadway, would carve the ornate sculptures. 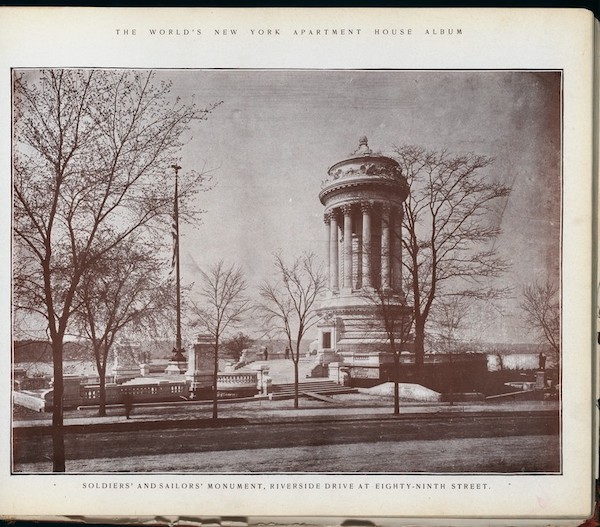 The monument was originally intended to stand at 59th Street and Fifth Avenue, but after protests, the location was changed to Riverside Park. Ground was broken and Governor Teddy Roosevelt laid the cornerstone in 1900. Two years later, Roosevelt would return as President for the unveiling of the monument. A massive American flag was removed to reveal the monument to a crowd of Civil War veterans.

Near the top, words encircle the marble, reading simply, “To the memory of the brave soldiers and sailors who saved the Union.” In front of the monument, inscriptions of New York regiments are etched into pillars alongside the names of the largest battles and their Union generals.

Although closed to the public for decades, the interior is decorated with mosaics of palm fronds and polished marble. The domed ceiling is 50 feet high and the thick, white walls would block any sound from the outside world.

The overall design of the monument draws heavily on a much smaller Ancient Greek monument in Athens. The Choragic Monument of Lysicrates was not originally intended to honor soldiers, however, but Dionysus, the god of wine and theater. While the monument has been recreated by architects across the world, it is argued that the iteration in Riverside Park is the most notable. A similar design can be seen high on top of the towers of The San Remo apartment building across the Upper West Side on Central Park West.

Throughout the early 1900s, Memorial Day crowds of up to 20,000 would parade up Riverside Drive to the monument. In July of 1976, a motion was raised to place the monument on the list of New York City historical landmarks. Perhaps driven by the excitement of the bicentennial celebrations just a week before, the site was quickly granted landmark status. 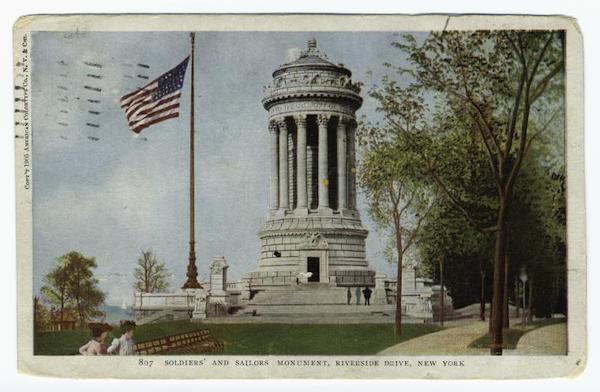 However, the site is in a certain level of disrepair today. A chain-link fence prevents visitors from nearing the base, apparently due to the possibility of falling chunks of marble. 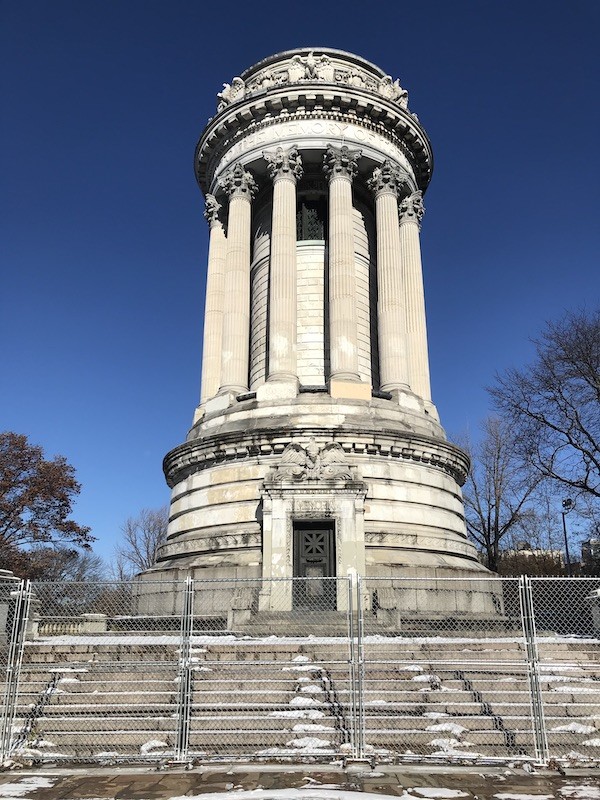 The monument was restored in 1960 for around $11 million in today’s dollars. Nevertheless, a 2017 study found that approximately $30 million more will be needed to bring the monument back to its former shine. As of now, no timeline is set for the restoration.

Nonetheless, come Memorial Day, expect a perennially strong contingent to visit the Soldiers’ and Sailors’ Monument to remember those “who saved the Union.”