It was just announced that Target will open a Columbus Circle store next year. The retailer will be leasing space at the still-under-construction 1865 Broadway, located between 61st and 62nd Streets. The new Target will open once the building is complete, which is expected to occur in the second quarter of 2019.

The discount retailer has signed a fifteen year lease for a 35,601 square foot space. The space will be on the ground floor and two lower levels of the building.

In their initial report, the building developers announced there would only be about 34,000 total square feet of retail space. So I think it’s safe to conclude that all of it will be occupied by Target.

The upcoming Columbus Circle location is considered one of Target’s “small format stores”, which are generally about 40,000 square feet (as opposed to the average Target which is 130,000 square feet). 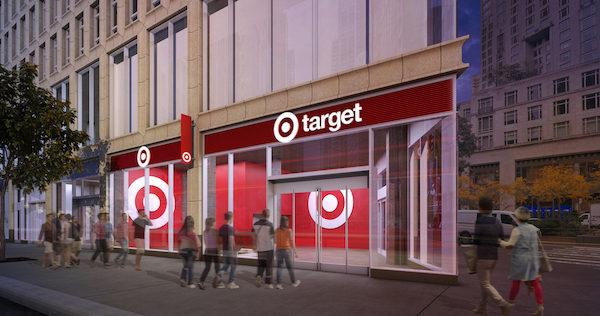 The store will be looking to hire about 160 employees. It is also expected to have a large food and beverage section with produce.

This is part of a larger expansion plan. Target is aiming to open 130 small-format stores in urban areas by the end of 2019.

And it will be New York City’s 28th Target location.

Target will open a second Upper West Side location

AvalonBay Communities purchased the site at 1865 Broadway from the American Bible Society in 2015 for $300 million. The building developer and Target seem to be equally thrilled with their partnership.

“We’re thrilled to continue growing our footprint throughout New York City with small-format stores that provide local families, commuters and visitors with a convenient, one-stop shopping experience. Located in a premier shopping hub of Manhattan, this store will serve Midtown West and Upper West Side guests, as well as meet the on-the-go needs of Central Park visitors and Columbus Circle shoppers,” Mark Schindele, senior vice president of properties at Target, said in a statement.

For neighborhood updates, be sure to join our newsletter!

Lululemon to Replace Athleta at 70th and Columbus