Home
Real Estate
The Grand Gems of the UWS

When we mean “grand,” we mean grand, like in “magnificent,” “opulent,” and “architecturally riveting.” And we have plenty of them on the Upper West Side. In fact, there’s quite a collection of apartment houses with some of the most ornate exteriors that just walking the UWS neighborhood is such a pleasurable and inexpensive activity. It’s because of these famous NYC buildings, their architectural brilliance, quirky details, and over the top opulence, that the UWS has earned its reputation as a unique and eternally interesting neighborhood.

One word of caution, however. As you gaze at these buildings, stand from a distance, and take them in from afar. But, if you decide to glance at them while walking, don’t. We guarantee you’ll get so caught up in the vision, that you may head right into an oncoming texter. Not cool.

Here are the two gems I find to be the grandest of them all.

While there is little mention of the origin of its name, “The Dorilton,” there is plenty about its development, architecture and history since its opening in 1902. Taking two years to complete, the building features 59 units, 12 floors, and was purposely placed to take full advantage of the NYC subway system.   Among its accolades at the time were, “the most flamboyant,” and our favorite line from a New York Times writer, “the architectural equivalent of a fist fight.”

And we can see why. It’s got a little bit of everything. Following in what is called a “beaux-art” style, the limestone and brick exterior features bay windows, a three-story copper and slate “mansard” roof (one that has four sloping sides with each one becoming steeper as it goes down), and “Juliet balconies,” or “balconettes.” These resemble a balcony but without the room for actual, um, people. But the entire building is considered a masterpiece of design, and so named a New York City landmark in the 1970s, and listed on the National Register of Historic Places in the mid 80’s. 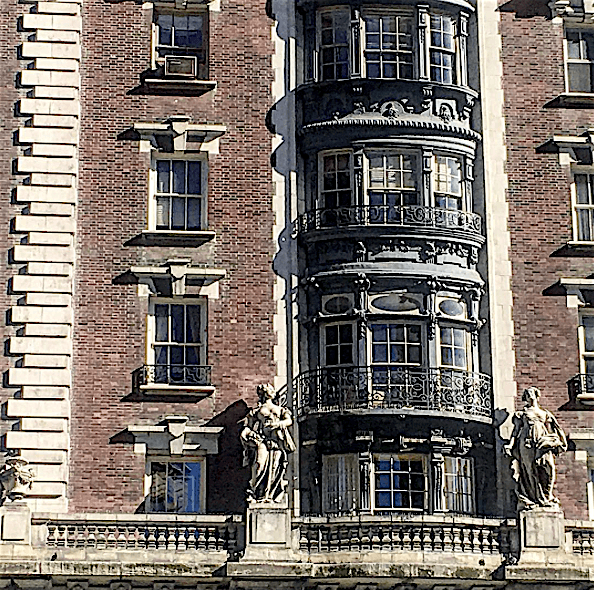 We do know that The Apthorp was named for the farmland owned by Charles Ward Apthorp, and sold at the turn of the century to William Waldorf Astor. With its boxy look, it takes a bit of work, and close inspection to find the immense limestone sculptures that represent the four seasons at the entrance, or the gilded gazelle heads on the wrought iron gates.

Its most remarkable feature is, unfortunately, not visible to the passerby, but only to the residents, and that is the magnificent courtyard with fountains, park-like grounds, all reminiscent of a king’s court. No wonder it has attracted the likes of famous New Yorkers such as Al Pacino, and inspired the writer Nora Ephron. With 163 units, The Apthorp was also designated a New York City landmark, and listed on the National Register of Historic Places in 1978. 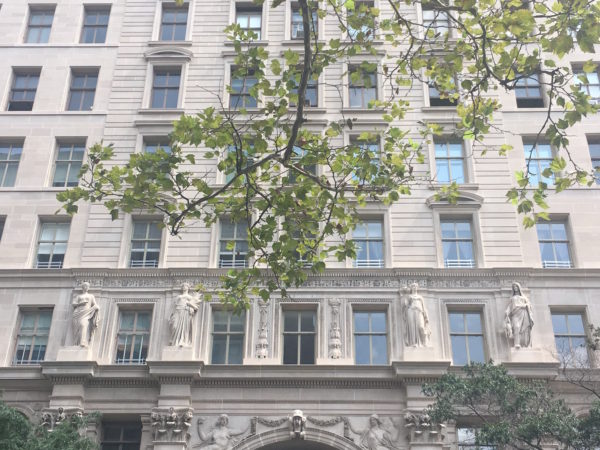 You know what street this is!