The southern entrance of Central Park is known for its parked horse carriages. But starting on September 11th, locals and visitors alike will see a new type of horse at the Doris C. Freedman Plaza (5th Avenue at 60th Street).

French artist Jean-Marie Appriou’s horse sculptures will be on display from September 11th to August 30, 2020. Appriou’s inspiration for his sculptures came from Central Park itself. Much of his inspiration comes from the horse-drawn carriages which drive tourists around the park.

The artist also found inspiration from the monument of William Tecumseh Sherman, which is located at the southeast corner of the park.

So, what makes these new installations stand out from their real four-legged counterparts? Curated by the Public Art Fund curator Daniel S. Palmer, these massive sculptures are a more surreal reimagining of horses. They are made out of clay, aluminum and foam. 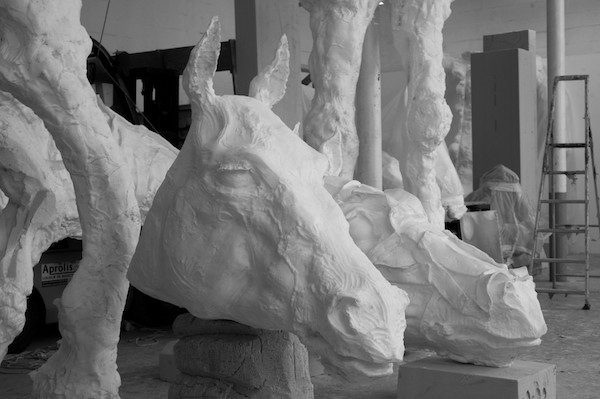 The Public Art Fund, founded in 1977, aims to introduce contemporary and dynamic art to a broad audience in New York City by mounting free exhibitions of international scope. It offers the public a powerful experience with art and the urban environment.

According to the website, the new installation hopes to let audiences use their imaginations:

Appriou has fashioned the forms of The Horses as fantastical beasts with hybrid characteristics and human qualities, placing them in a long tradition of mythological animal artworks. With their curious compositions and titles, these horses suggest: a daunting gateway formed by an armor-clad warrior (Le Guerrier/The Warrior), a forest of legs of entwined lovers (Les Amants au Bois/The Lovers in the Woods), and a sphinx-like mystic seated on its haunches and draped in an embellished cape (Le Joueur/The Player). They encourage us to make our own imaginative associations and to reconsider how civic sculpture addresses its public. Rather than an equestrian statue upon an elevated pedestal, these horses invite audiences through them, under them, and around them – bringing us closer to the formal dynamism and psychic mystery of these majestic creatures.

Learn more about the installation here.