Home
Community
“The Joker” Lurks on the Upper West Side

Have you seen the Joker on the Upper West Side? White face, red lips, dirty green hair? You know, like on TV and in the movies: the Joker! Except this one is one of those unofficially licensed Jokers. Nevertheless, with the brood tone of Heath Ledger’s portrayal of the character, paired with bright paint tones on his face and a solid gold metal grill in his mouth which resembles that of Jared Leto’s interpretation. What the Upper West Side has here is a “Frankenstein Joker,” and he’s got a fancy car with his face on it to match. Is it just me or is it getting crazier out there?

“There is a guy who calls himself the Joker on 69th Street between Columbus and Central Park West,” wrote a tipster who recently experienced a Joker sighting. “He has an Audi that’s decorated with Joker pictures. I’ve seen it parked there on and off for the last two months. During street cleanings, he stands by his car and films himself talking. I’m not sure what platform he’s streaming to. His website on his car is StraightDropPlace.com. I’m not sure who he is or why he’s on the Upper West Side and I can’t find anything online.” 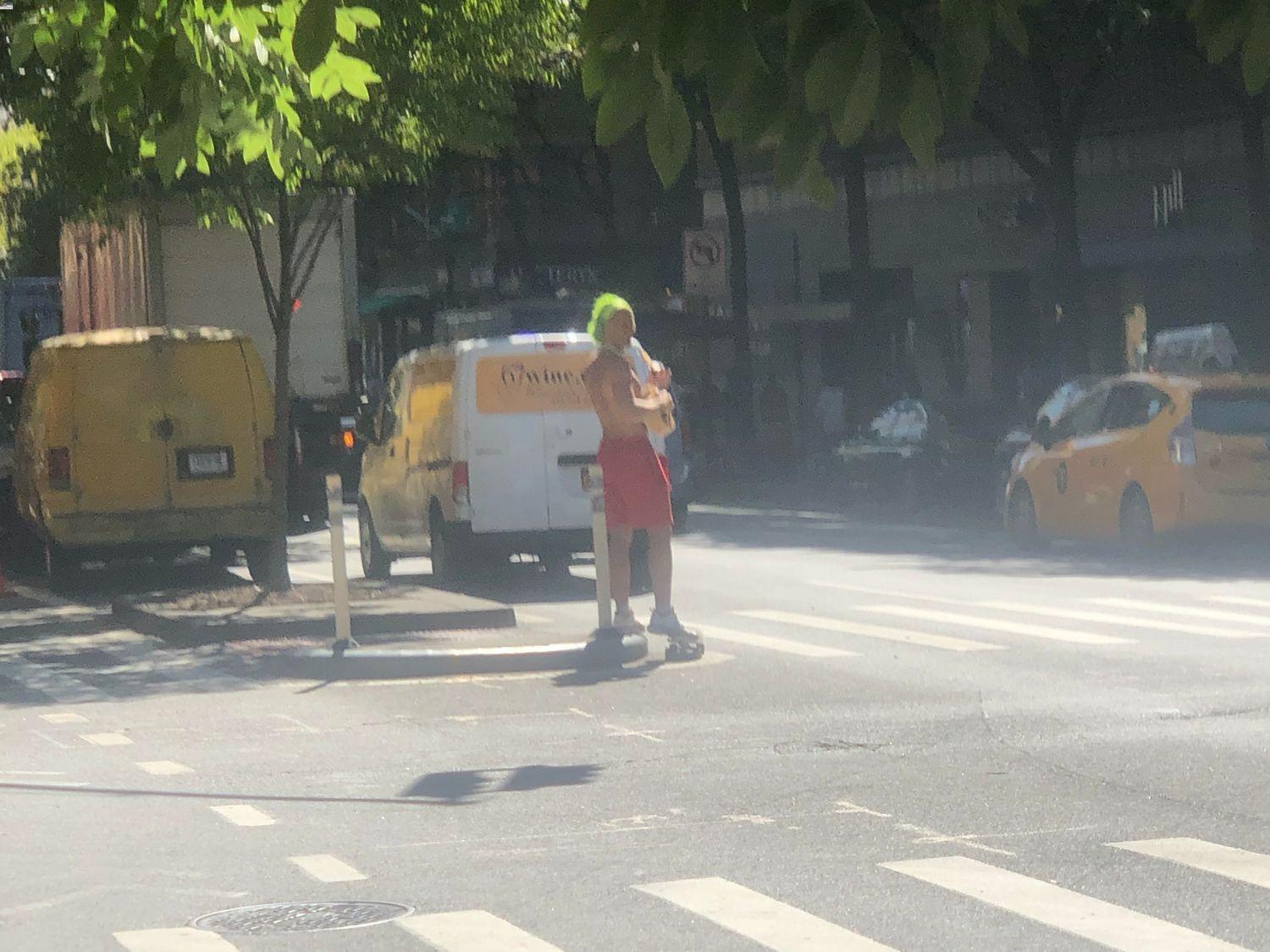 “The Joker” crossing at 68th and Columbus Ave.

ILTUWS first made contact with the West 69th Street Joker when he arrived to the neighborhood during the summer of 2021. It was then that we learned he had been living out of his car, calling West 69th Street home. He briefly had a stint living on West 68th Street but had issues with York Prep School security, which might have included the police, so he went back to 69th. 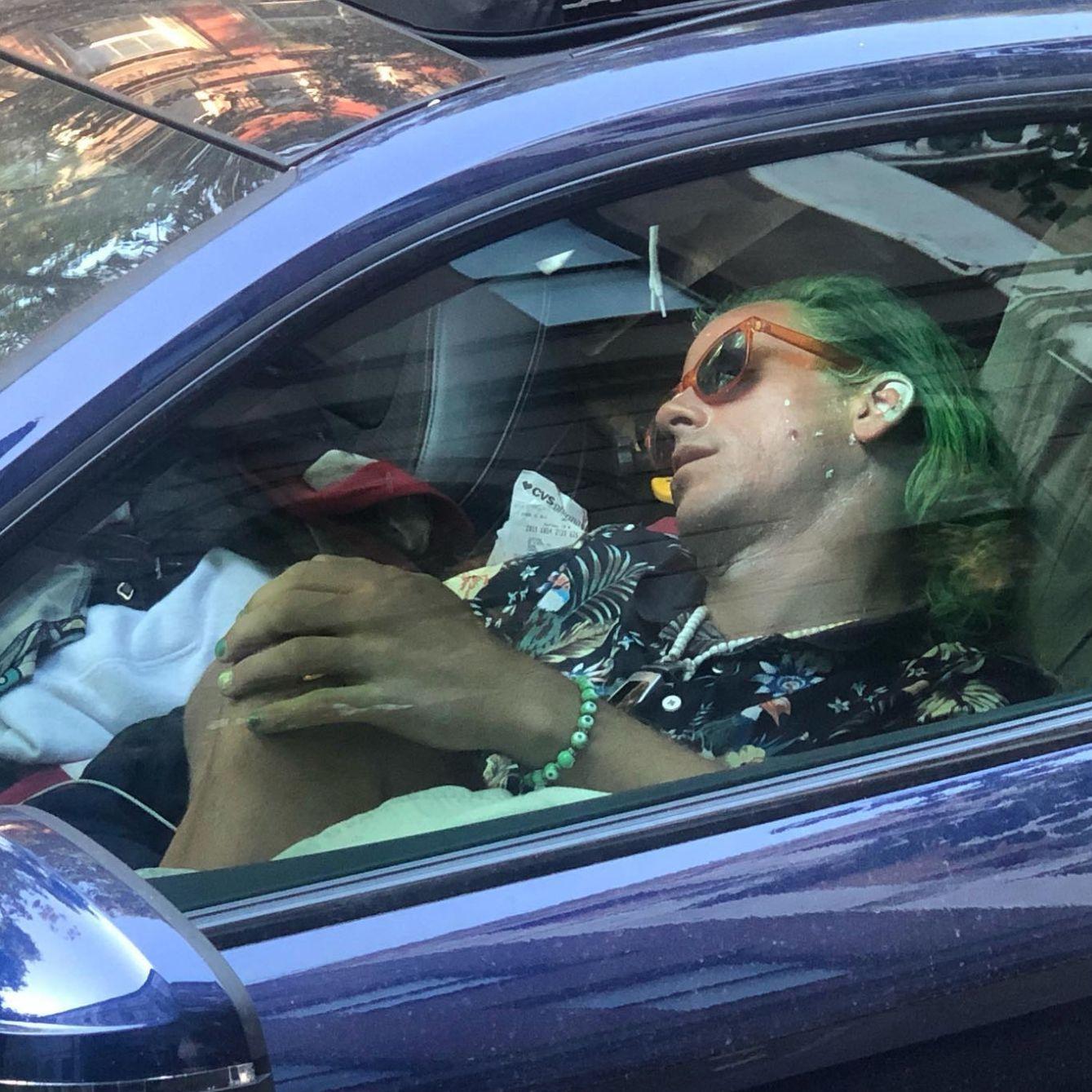 It became a daily routine where we’d find him applying makeup while talking to his fans — which currently exceed a half million — on TikTok. He also has a backup account with more than 385,100 followers. At one point, this Joker had over one million followers on TikTok, but his original account was deleted. TikTok hasn’t answered our request for comment on the matter. He’s had his accounts deleted quite a few times now.

This Joker can be a charmer. From feeding horses to dancing it up in Central Park, the Joker even helped fish some Citi bikes out of the lake by Bethesda Fountain. We’re not sure how the bikes ended up in the water but better out than in. One fan went so far as to pay tribute to this Joker by getting a tattoo of him on his leg.

Now for the flipside. To quote the Joker in The Dark Knight: “As you know, madness is like gravity. All it takes is a little push.” Last summer in 2021, the Joker was dragged out of Yankee Stadium for some kind of stunt. When we asked about what happened, he told us via text that he “can’t discuss the situation.”

The Joker’s real name is Kyle Mrzena, but in our dialogues, he calls himself Lacey.

Mrzena has a history of some wild antics, many of which were discussed in a March 2021 exposé by the Daily Beast titled “We Unmasked the Spring Break Joker and He’s a COVID Truther.” In the story, Mrzena is quoted as saying, “When it comes to COVID and the guidelines, it’s all a joke. It’s all propaganda.”

The Daily Beast uncovered the origins of Mrzena’s Joker journey. They wrote about how Mrzena had issues with his child’s mother early on during the pandemic, forcing them to break up. At the time, they were living with her grandparents in Bakersfield, CA, according to the story. Mzrena said, “The stress of the pandemic gave her some reason to break ties with me. Our relationship ended and I decided to start traveling. I took on the persona of the Joker to protest COVID restrictions and lockdowns.”

We asked Mrzena if he had a statement in response to the Daily Beast story. He responded, “I’m not making a statement because there’s nothing to talk about. I am an artist. I need financing and I want to provide for myself and my family.”

Anyone watching this year’s WWE Summer Slam might have noticed Mrzena’s Joker going wild on TV in Nashville. He also staged some photo ops at WrestleMania at AT&T Stadium in Dallas. He told us he attended the 2022 MTV VMAs in Newark, NJ, from the very last row. This time he didn’t attend as the Joker, perhaps to avoid getting into trouble with security.

In a recent on-the-street chat we had with him, Mrzena mentioned he’s been doing TRL (Total Request Live)-style fan request lip-sync videos in Times Square, which is right by the Viacom building where TRL was filmed in the ’90s and early 2000s.

We spoke with West 69th Street Block Association President Eileen Vazquez about the Joker’s presence on the street, sharing all the information we’ve uncovered to date. Vazquez said the block is sort of split in its support of the Joker living there. Vazquez noted that there’s a mix of “pearl-clutching” from neighbors who say “What about the children!” — in regard to the Joker smoking weed from a bong on the street regularly — “and because he’s scary. The Joker is a scary character. That’s not untrue.”

Vazquez points out, “There’s somebody who literally does not have food to eat who’s begging on the corner for food. And then there’s someone sitting in a $60,000 car. Perspective, you guys …”

How Mrzena is financing everything, we’re not quite sure, and he didn’t want to comment. From his travels around the country in an expensive car to attending big events and overseas travels in Brazil, don’t forget the solid gold grill in his mouth. Is he a trust-funder on the loose? We know he gets fan donations through the app, but he downplayed these contributions as being limited. “If you’re good at something, never do it for free,” Heath Ledger said in the 2008 Batman film.

Last we left it with Mrzena, he told us he recently left the city to “go on tour.” Currently, it appears he’s in Niagara, NY. When asked if he was planning on returning to the Upper West Side again, we did not get a response. Vazquez says Mrzena’s Joker character is welcome back anytime as long as he moves his car for street cleaning. “He’s like that uncle you invite to Thanksgiving but don’t know if he’s going to show up.”