Before the Columbia University lion mascot graced Morningside Heights, there was another “lion” fixture in the neighborhood; the Lion Brewery, which lasted from 1857 to 1944. 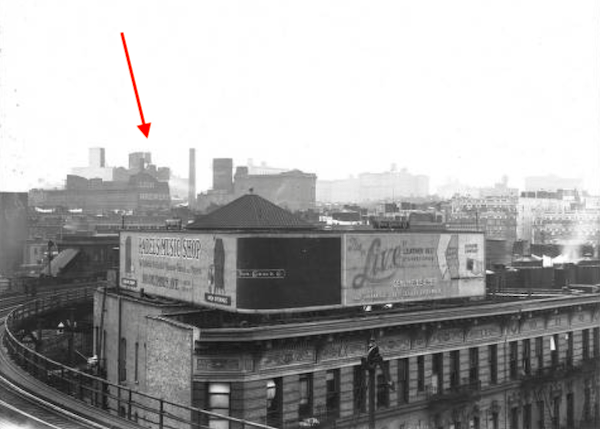 While the actual street locations vary between reports, the Columbia University Library says the brewery was situated between 106th and 110th Streets and stretched from Tenth Avenue to Central Park. 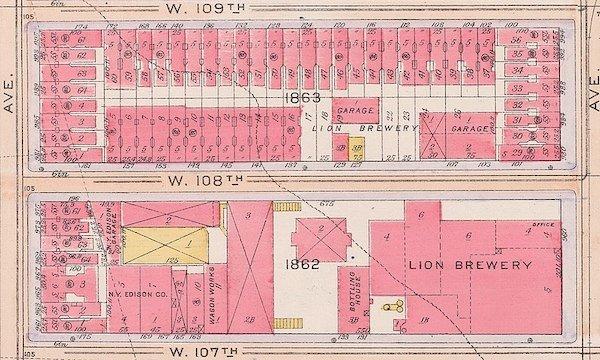 In 1820, the brewery began as Schmidt & Speyer. It was owned by a gentleman named Joseph Schmid (sometimes spelled with a “T” at the end), a German immigrant. Joseph then met a new partner, Emanuel Bernheimer, and updated the name to Bernheimer & Schmidt. Eventually, they renamed the brewery Lion Brewery in 1850. 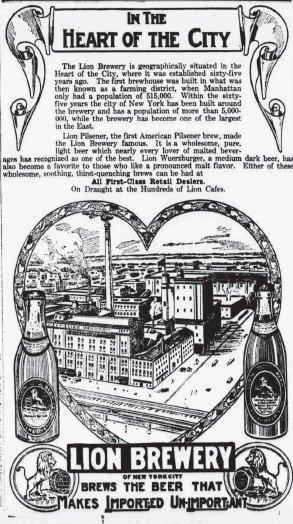 An advertisement from 1914, c/o Library of Congress

The Columbia University Library reported that the brewery generated between $1,500,000 to $2,225,000 in the next thirty years. Unfortunately, newspapers also reported that Bernheimer and Schmidt’s combined net worth had fallen to $500,000. The two owners decided to transfer their business shares to their more business-savvy sons, August Schmid and Simon Bernheimer. The brewery was valued at $1,500,000 by 1888.

At the time, the neighborhood of Morningside Heights was the perfect location for the brewery because it was vast farmland with no mass transit connections to downtown New York. The Columbia University Library reported that the south portion of the brewery block was allocated for stables. The block’s northern section was for the granary and dyeing plant called “Noil” (“lion” spelled backwards). To the east was Lion Brewery Park and Hotel, where New Yorkers could leisurely socialize and enjoy picnics, concerts, and military marches. That is until around 1897, when the construction of the Manhattan street grid brought an end to the beautiful park. Bernheimer and Schmid sold the park in 1898, which was later converted to residential lots.

While Lion Brewery was booming, it also had its fair share of drama. Local newspapers reported a “brewery war” in April 1888. To suppress the Brewers Union, 79 breweries in New York and New Jersey locked out around 4,000 workers, including some employees at Lion Brewery. There was another report of a delivery wagon worker named Jacob Bergman whose beer barrel slipped from his hands as he was unloading it and ultimately crushed him to death.

READ MORE: The “Suicide Curve” at West 110th Street – and the Tragic Reason for its Name

In the following years, the brewery was on fire—literally. In August 1890, 29 horses were killed in a fire which resulted in a $100,000 loss. In 1895, one report stated that 40 of the 143 horses had perished, although Columbia University Library says only the stable’s upper level was damaged. On July 4, 1927, a person threw their firecracker from the elevated train to the brewery’s tin roof, which set the place aflame again.

When August Schmid died in 1889, his wife, Josephine, took over as co-partner to Simon Bernheimer. The two often fought over operations and real estate until they took matters to court in 1901. By 1903, Josephine bought out her husband’s partner for $1,400,000 and became the sole brewery owner.

The owners of The Lion Brewery tried not to let the 1920 Prohibition dampen their spirits and business. They brought a suit to the district court, although nothing ever came of it. By then, the neighborhood was changing. Eventually, in 1941, the Lion Brewery closed down and merged with the Greater New York Brewery, Inc. The brewery was demolished in 1944.

READ MORE: Little Coney Island and the Criminality of Dancing on Sundays

Bloomingdale History reports that the Booker T. Washington Middle School now occupies the site. Apparently, the garages on West 108th are remnants of the old brewery.

We also spoke with Jim Mackin, a local historian with the Bloomingdale Neighborhood History Group, who said the Lion Brewery was the largest employer in the area at the time, and was a go-to hang out spot for students.

“On the east side of Columbus, they had a large outdoor beer garden for their employees. And then they opened one for the public on Broadway and West 110th Street. Over time it got rebuilt into a movie theater. When their beer garden was on the corner of West 110th Street and Broadway, that was the real Columbia hangout, not the West End Café.”