Home
Food & Drink
The Many Restaurants of 208 West 70th Street

Restaurateurs seeking to become a long-term neighborhood staple have not found much success at 208 West 70th Street, between West End and Amsterdam Avenues. At least eight restaurants have claimed this address as its home and none have lasted more than ten years.


The revolving door of restaurants dates to at least 1989, though it is unclear what the restaurant space offered before then. The address of 208 West 70th Street is now part of the Stonehenge 70 apartments, a 15-story apartment building designed in the 1920s by George Pelham, the same architect who designed James Dean’s West 68th Street hideout.

With its main address reported as 206-222 West 70th Street, this pre-war building formerly billed as the Bradford Hotel has been host to sports stars, members of the culinary extraordinaire, the “Greek Martha Stewart,” and even Seinfeld’s “is soup a meal” debate.

The location was most recently home to Tavola Della Nonna, an Italian-American restaurant that opened in February 2020. We’ve recently gotten word that it will not be reopening, but that something new is in the works at the space. Tavola Della Nonna, translated from Italian as Grandmother’s Table, was led by Executive Chef Stratos Georgedakis, who was also the chef at Quality Meats. One notable feature from the restaurant was its glass-walled pizza bar where hungry guests could watch the crew cook up an old-world favorite.

Lincoln Square Steak occupied the 9,000 square foot space from early 2015 to September 8, 2019. The space was used in November 2019 to film part of the January 16, 2020 episode of Law and Order: SVU, with the restaurant’s former marquee announcing the location as the fictitious steakhouse Markeevious Rare. Lincoln Square Steak also claimed Georgedakis as its executive chef when it reopened under new management in September 2018 with 140 main dining room seats and a 45-seat separate bar and cafe area. From the outside, the location was hard to miss. Its dark red walls bled into the interior and looked like, as Gothamist called it, a bordello. 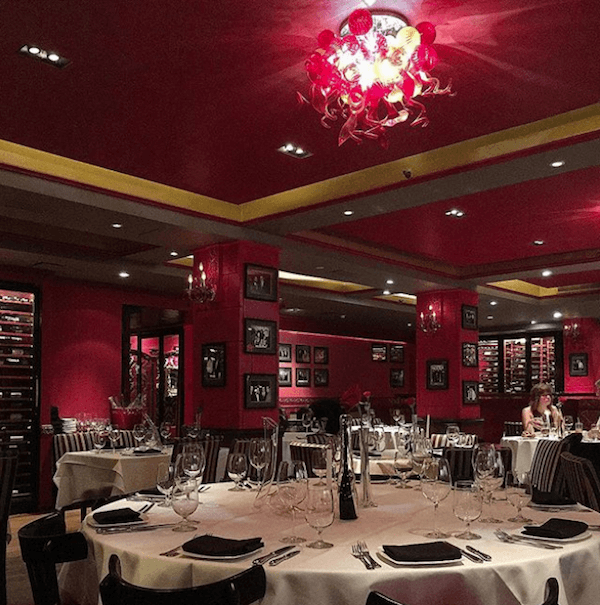 Maria Loi opted for a more pleasing violet hue on her marquee when she rented the space from October 2011 to July 1, 2014. Labeled as both the Greek Martha Stewart and the Greek Julia Child, Ms. Loi closed her self-named Greek eatery (Loi) due to a lease dispute. The culinary magnate has since opened Loi Estiatorio at 132 West 58th Street, and was recently highlighted for her personal use of a Mediterranean diet, which Loi Estiatorio’s own employees have had real success with.

Keeping its doors open from April 2002 to August 2011, Compass holds the record as the longest-lasting restaurant at 208 West 70th Street. Though the New York Times detailed a revolving door of chefs and culinary rebirths, it was the décor that seemed to have often left a bad taste. Described as “architectural easy listening” with red banquettes said to belong in Liberace’s living room and a “casual front lounge, with its blue-lit glass bar and view onto the street, [Compass’ dining space gave] way to a windowless dining room that—even after an extensive redesign—manage[d] to feel claustrophobic and cold, despite its high ceilings and rich wooden floors.”

Marika’s “flashy” UWS residency was short-lived, running from January 2001 to April 2002. In May 2001, Neil Annis was brought in as the executive chef and remained as such when the eatery reopened as Compass. Crains New York reported that Marika was the UWS’ biggest restaurant with 10,000 square feet and 300 seats “luxuriously deployed in a bar, cafe and lounge, main dining room and two private function rooms,” “lipstick-red booths ringed by tables on a one-step riser” and wine racks visible through “opaque screens decorate walls.”

Thanks to Seinfeld, 208 West 70th Street may be best remembered as Mendy’s West, despite its short run that began in 1996. Described as a TV monitor-studded space, the kosher delicatessen’s most difficult choice was not deciding what to eat but whether, as Seinfeld made famous, soup is a meal. (It’s not.) The debate continues and can potentially be settled at Mendy’s 441 Park Avenue South location.

Former Yankee and Met Lee Mazzilli opened a 350 seat, family friendly sports cafe and memorabilia shop in May 1994. Complete with 50 television screens and a game area for kids, Lee Mazzilli’s Sports Cafe served up American food with an Italian flair. It appears that Mazzilli’s restaurateur career did not last long due to the 1994 baseball strike and hockey lockout, though an exact closing date is unknown. Also unknown is the fate of the big baseball cap that acted as the restaurant’s marquee and awning. However, at least one part of the former cafe has withstood the test of time. In 2014, Mazzillis’s daughter Lacey posted a a photo of a Lee Mazzilli’s Sports Cafe tee shirt on her Instagram account, a gift to her from current Yankees broadcaster Michael Kay.

The last traceable restaurant at 208 West 70th Street is Cosmico, a 1989, 250-seat, self-billed “Supper Club” that was said to resemble “an upscale theme lounge in Las Vegas” … without a determinable theme. “The multi-tier, dining room ha[d] a big stage at one end done up in a Greek countryside motif … A glass ceiling ha[d] thousands of tiny inset lights, and at both ends of the room [were] terrariums that turn out upon inspection to consist mostly of bucolic wallpaper with a few shrubs scattered in front. Adorning the room [were] sculptures and paintings by the actor Anthony Quinn,” father of Cosmico’s manager Danny Quinn.

Though there does not appear to be a record of any restaurants before Cosmico, the basement of the former Bradford Hotel was a club in the late 1960s to early 1970s named Ungano’s. The club, remembered as a holdover of the Copacabana era, was a place where out-of-town bands “and ‘name’ artists could play, and also where A&R reps and agents would go to see talent auditions.” Ungano’s hosted artists including Fleetwood Mac, BB King, The Kinks, John Lee Hooker, Muddy Waters, Van Morrison, and Spooky Tooth.