Pre-email, stamps and stamp collecting were a big thing. Avid collectors, whether they were 12-year olds or their much older relatives, took this hobby seriously. The passion came along with well defined lists of necessary items such as albums, hinges to affix stamps without damage onto display pages, tweezers, magnifying glasses, and of course, glassine envelopes to store stamps to be added to a collection.

In New York City, stamp collectors could select stamps and order from a catalogue; collect off the envelopes they received or those steamed or soaked off the envelopes provided by friends, family and acquaintances. Stamps could also be purchased individually or in sets from stores like Gimbels on 33rd Street and 7th Avenue.


All this interest in stamp collecting explains the fanfare that surrounded the 1956 opening of the New York Coliseum at Columbus Circle, with the 5th International Philatelic Exhibition featured as one of three events.

Thousands attended this exhibit over its duration. There were many vendors and the show offered stamp enthusiasts the chance to climb several red carpeted steps to view a very small, rare 1 cent British Guiana (now Guyana) magenta stamp ensconced in a showcase resting on a pedestal. Regarded by many philatelists as the world’s most famous rare stamp, it was valued at $9.5 million in 2017.

The event was also an exhilarating chance to see a brand new building promoted as the largest exhibit space in the world. A 3 cent US postage stamp commemorated the opening of the New York Coliseum.

There were detractors from the start. Unimpressed, world famous architect Frank Lloyd Wright sniffed to the NY Times, “It’s a great utilitarian achievement, but architecture is something else again.”

Built by architects Leon and Lionel Levy and planned by Robert Moses, The Coliseum included both a windowless, low-rise exhibition space and a 26-story office block, which Christopher Gray of The New York Times criticized as a “low point for New York’s public buildings” in a 1987 article. He added that “the Coliseum was simply a plain rectangle” and that “the relation between the two elements was awkward at best.” 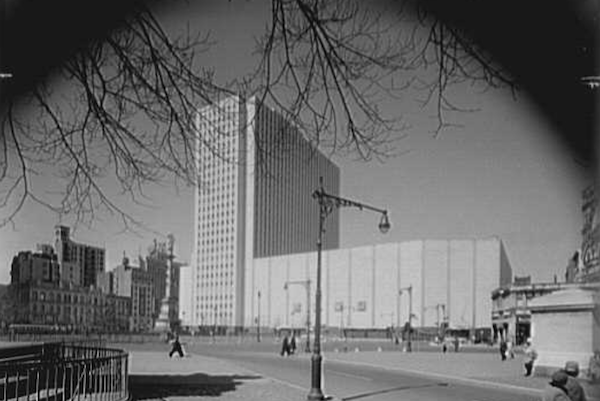 On the positive side, some noted that the New York Coliseum’s construction was a supportive response to merchants who saw value in promoting and conducting business transactions at trade shows rather than selling door to door. Also, the earlier Grand Central Palace exhibition hall was too small to meet the needs of a growing city.

Possibly, negative feelings about this huge, windowless space also reflected animosity for the heavy handed authority Robert Moses imposed through his various official roles in the city. Calling the building “The Coliseum” highlighted his ambition to set his name down in history in the manner of the Roman emperors, according to Robert Caro in The Power Broker, his exhaustive biography of Moses.


The total building construction cost was $35 million, of which $26 million was raised by Triborough Bridge and Tunnel Authority (TBTA) toll revenues. Many locals felt the fundamentally utilitarian structure was unaesthetic and looked like a huge white stone wall with no connection to the beauty of Central Park that stretches out in front of its doors.

In spite of everything, the exhibition center did seem to generate support for the exhibition center concept, which was later successfully undertaken with the construction of the Jacob K. Javits Convention Center. In its 30 year life, hundreds of events were held at the Coliseum – with shows dedicated to yachts, futuristic cars, model rooms, photography, antiques and flowers. 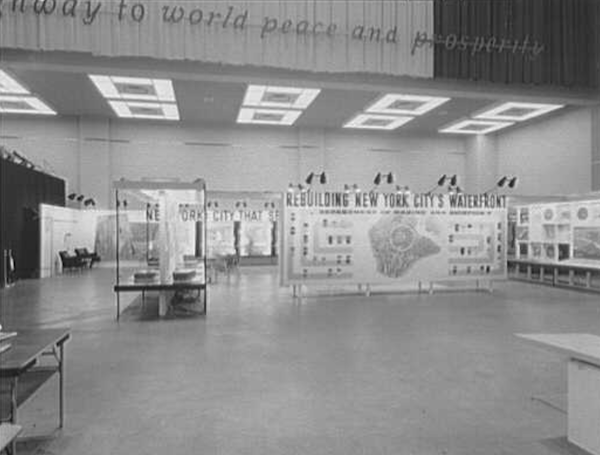 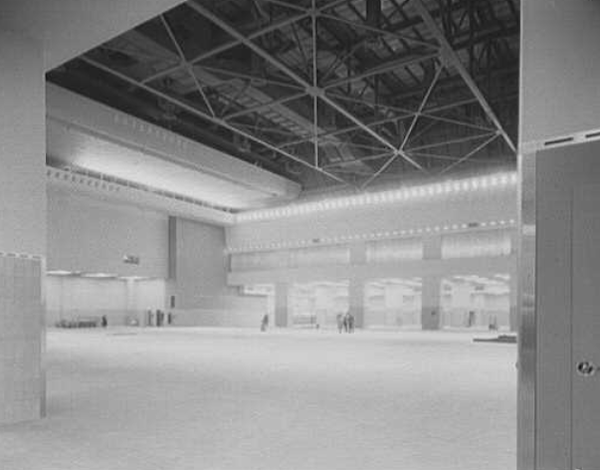 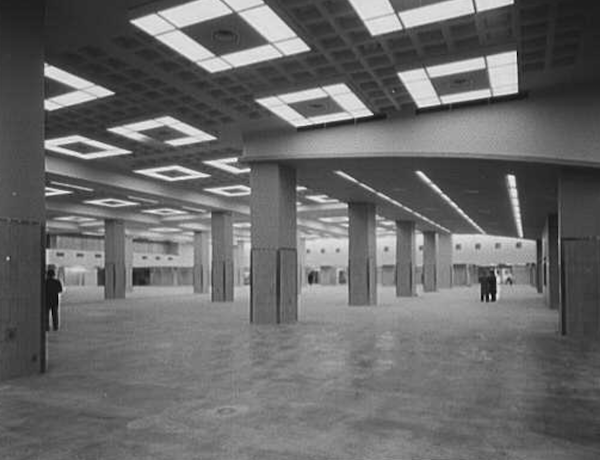 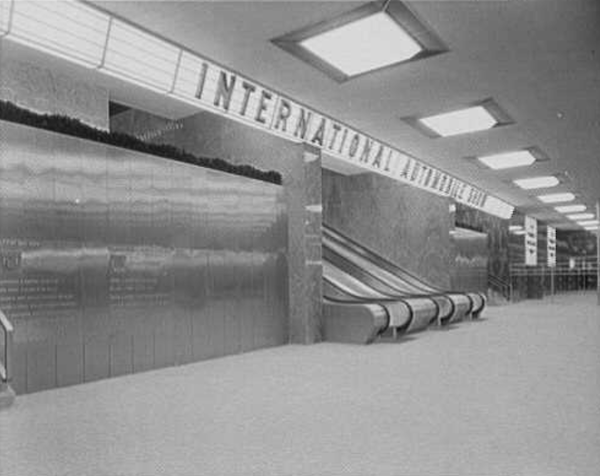 Among noteworthy events was The Soviet National Exhibition featuring the Sputnik satellite that had been launched in 1957, along with highlights of Soviet industry and culture. The exhibit was part of a 1959 agreement that included an American show hosted in Moscow. The New York Coliseum’s last exhibit featured 800 vendors of men’s sportswear.
By the late 1990s, it was clear that the New York Coliseum had failed. Groups of homeless people regularly slept in its doorways. After various potential sales to corporate entities fell through, it was purchased by Time Warner, razed and the existing Time Warner Center went up.

Did anything remain apart from the memories of those who may have attended an exhibit? Yes, actually. Bare as the building face was, the facade of the four-story, 150′ square exhibition space that abutted its tower did boast a set of four prominent, ornamental medallions of the federal, NY State, NY City and TBTA seals. Commissioned by Moses, these panels were made by sculptor Paul Manship, whose gilded Prometheus at Rockefeller Center is an NYC landmark. With the Coliseum sold, the reliefs were removed and restored. Three were installed on the face of the MTA Building at Battery Place. The fourth relief, too big to fit, was stored inside the building. 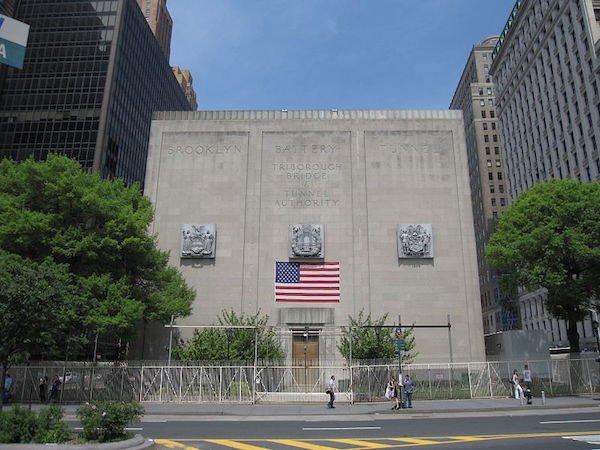