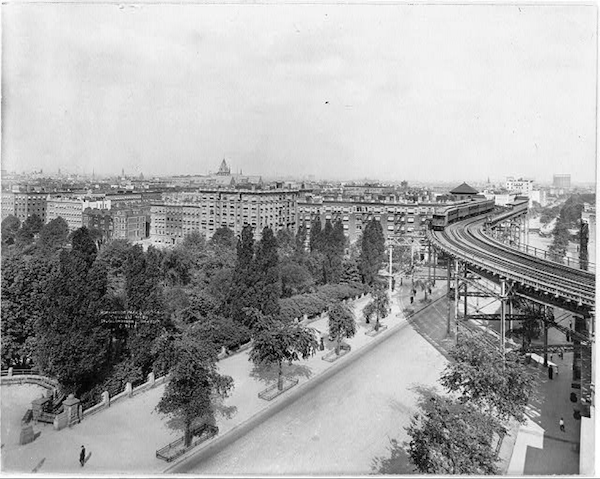 In the early 1900s, a part of Manhattan’s elevated train system was known as the “Suicide Curve.” Located at West 110th Street, just down the block from Little Coney Island, the foreboding moniker sounds more like a terrifying amusement ride than part of the city’s train system. But, sadly, Suicide Curve had a literal meaning.

Manhattan officials sought construction of an elevated train line as early as 1825, though work did not begin until 1867. Initial plans included train lines along Greenwich Street and subsequently on 9th Avenue from the Battery to 30th Street. By 1891, the 9th Avenue line ran all the way up to 116th Street. The Interborough Rapid Transit Company’s (IRT) “9th Ave El was over 100 feet above the street at ‘Suicide Curve,’ the portion of the El that made a 90-degree turn from 9th Ave onto 110th St. and another from 110th St. onto 8th Avenue,” according to nycsubway.org.

The IRT’s most famous curve lived up to its treacherous name, even catching the attention of Thomas Edison who filmed an 1899 home movie along this part of the tracks (starting the video at 104th Street).

The S-shaped line caused train conductors to slow down drastically at this point to keep the trains from hurtling to the street below. According to the New York Times, there were a number of accidents along the curve.

In 1896, two-trains collided and (thankfully) caused only an inconvenience for the passengers who were forced to go to 104th Street “along narrow, slippery planks intended for use by maintenance workers” because there was no stop on 110th Street at this time. In December 1912, another two-train collision injured ten. The conductor faulted slippery tracks. 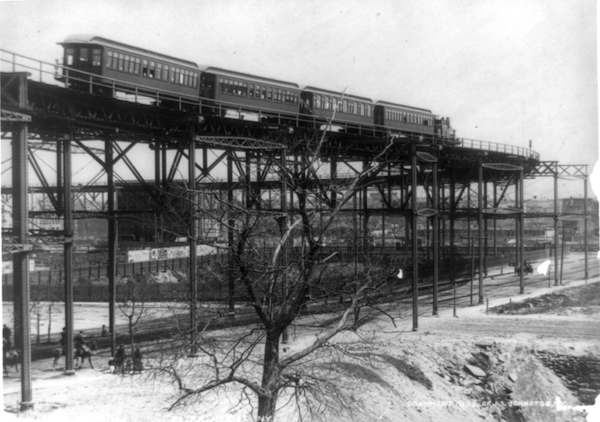 But, as Ephemeral New York points out, the Suicide Curve got its name because of the number of people who leapt to their deaths there. The first reported suicide seems to have taken place in May 1912, when a man jumped in front a train at 110th and Lenox Avenue. Another occurred on May 7, 1913 when the body of a Bronx resident “was crushed by the fall” of a 70 foot jump. By May 1925, there had been eight suicides including one on May 13, when a man threw himself from the highest point of the elevated tracks at 110th and Manhattan Avenue, landing within a few feet of a group of children.

The number of suicides at this location rose to a shocking number by January 1927. The New York Times reported eleven suicides in the prior year and thirty-eight total who jumped from the highest point of the train’s system; “the greater part of these had chosen the downtown side, that facing the Cathedral of St. John the Divine.” When another suicide took place in June 1927, they had become so commonplace that the Times barely gave it more than two to three lines of coverage.

It is unclear what actions the City took, if any, to prevent further suicides at this locale. But by January 1934, the S-shaped tracks were dubbed “Dead Man’s Curve” when a 57-year-old man named John Bolger survived a 75-foot-fall – from which he landed upright in the passenger seat of a passing car. “Bolger was the first in the memory of the police to make the plunge and survive.” January 1937 saw what seems like the last recorded suicide at the curve, when a 25-year-old woman jumped from the five-story high platform at 110th and Manhattan Avenue.

Demolition of the Suicide Curve began in November 1940. Mayor La Guardia predicted that it would be finished by January, two months ahead of schedule. He was right. Only “stumps” of the Ninth Avenue El were left by December 22, 1940 and the project was completed soon after. A 1900 postcard of the suicide curve [public domain] In the heyday of the El—A train of 1894 pulled by a steam locomotive rounding “Suicide Curve,” then in a largely rural district. via NYPL This Upper West Side Bunny Loves Going to Central Park