The Upper West Side is known for its rows of historic brownstones and large, prewar apartment buildings. As a result, the structure on the southwest corner of 72nd and Broadway is notable not because it has classical brickwork or a sunlit courtyard, but because it doesn’t.

The corner building comes with 19 stories of glass and shining metal which contrast with the nearby Ansonia, Central Savings Bank, and old 72nd Street subway entrance, all of which are on the U.S. National Register of Historic Places.

Built in 2008 and currently home to a Trader Joe’s, a Duane Reade, and a Bank of America, the building does not yet have a long story, but the ground it stands on certainly does. 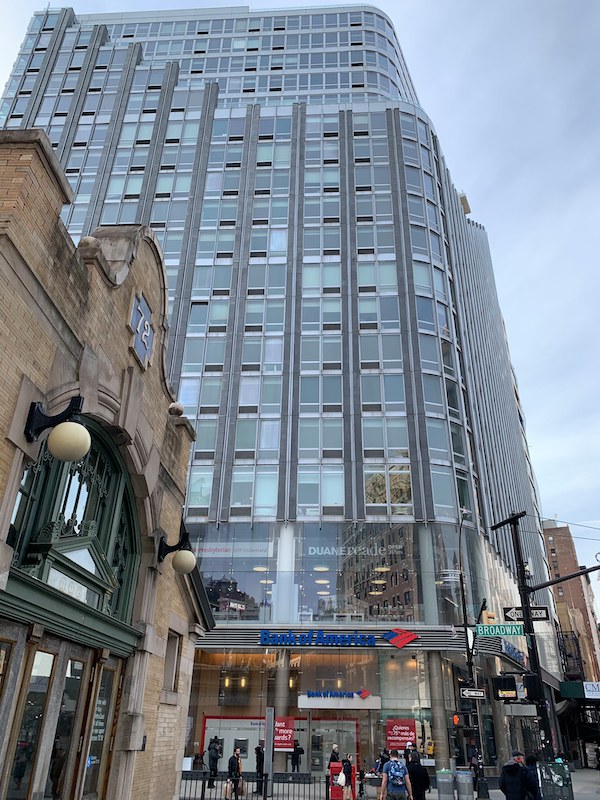 Around the turn of the 20th century, the Upper West Side became increasingly desirable to the city’s elite families. The completion of Riverside Park and Riverside Drive slowly drew wealthy citizens away from the Upper East Side. With this new demographic came new needs, including a social club.

READ MORE: The Old Apthorp Mansion of the Upper West Side

At that time, many of New York’s foremost clubs were in Midtown or on the Upper East Side, where most remain today. Holding membership at a club was a necessity for many of the city’s elites and to avoid a lengthy commute, a group of businessmen formed the Occidental Club. Within a year, it became the Colonial Club and a lot was purchased at 72nd Street and the Boulevard, now known as Broadway.

In 1891, architect Henry Franklin Kilburn was commissioned to build a clubhouse in a “colonial” style with all the modern luxuries of the time. Kilburn was already known on the Upper West Side for designing the West-Park and West End Presbyterian churches. 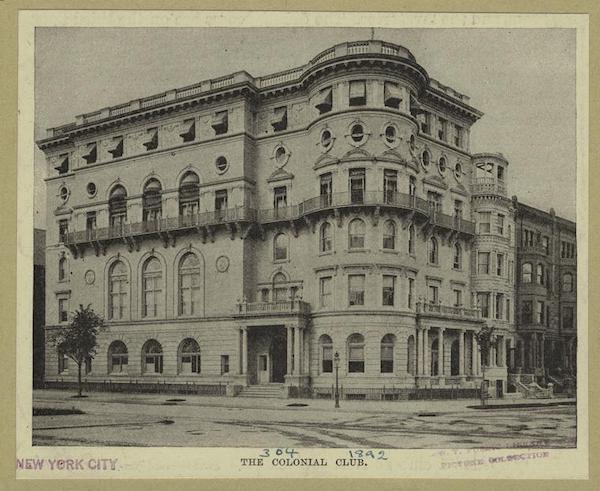 By the time of the Colonial Club’s grand opening in 1892, membership had risen to around 700 Upper West Siders. Perhaps due to the relative isolation of the club compared to its Midtown counterparts, nearly all of its members lived in the immediate area. The Colonial Club also set itself apart from the old gentlemen’s clubs by allowing, and encouraging, female members. Although there was a separate entrance for women on 72nd Street, it was equally impressive as the men’s door on Broadway. At the time, the Colonial Club was only the third social club in the city to allow women to dine at its restaurant.

The Colonial Club had no shortage of selling points to entice potential members. The building boasted a basement bowling alley, café, dining room, billiards room, expansive ballroom, and member apartments. Even the roof was used, holding a large garden for relaxing during the summer months. The Colonial Club thrived during its first years and hosted countless parties, dinners, and balls. Unfortunately, the success of the club was short-lived. In 1903, the building was seized in foreclosure due to financial troubles within the club. Despite attempts by wealthy members to resurrect the club, the building was converted to offices three years later.

Over the next 100 years, all traces of the building’s former role as a stately clubhouse slowly vanished. In the 1980s, the Landmarks Preservation Commission reviewed the building but declined to protect it due to the extensive alterations that would be needed. In 2007, developers decided the corner real estate at 72nd and Broadway was too valuable to let fall into disrepair and within months, the building had been demolished.

Although all physical traces of the once progressive and exclusive club are gone, its story can be easily held onto. If you find yourself waiting in the checkout line of the 72nd Street Trader Joe’s, remember that you would have once been in the basement of The Colonial Club, bowling next to a Rockefeller.

The Lion Brewery in Morningside Heights