Fencing is an ancient and historic sport which provides modern benefits, and there’s no better introduction to the sport than through Summer Youth Camps at Tim Morehouse Fencing Club, located at 210 West 91st Street, between Broadway and Amsterdam Ave (with additional locations in Westchester and Connecticut). 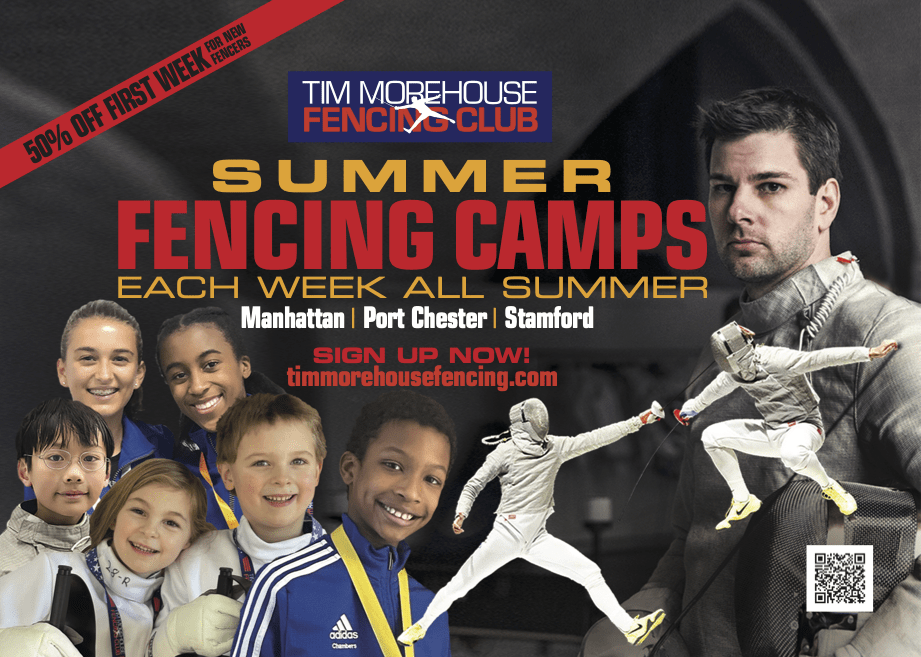 While the break that summer vacations provide helps students recharge, it is also a great time to learn something new in a fun environment. Kids thrive within a structure, such as the one provided by this day fencing camps.

With summer camps running from early June to late August and school vacation camps throughout the year, Tim Morehouse Fencing Club offers a healthy way for children of all ages to stay engaged, unplugged, social, and happy, while learning about the incredible sport of fencing.

Fencing has been featured in every one of the modern Olympic Games and comes originally from the Middle Ages. However, its benefits are thoroughly modern.

Fencing teaches discipline and focus. Facing an opponent in fencing is as much a mental exercise as it is a physical one. Strategies need to be planned, and decisions must be made in a split second, focusing on mental acuity. Fencing is often considered a more physical version of chess.

Benefits include increased coordination, agility, balance, flexibility, strength, and cardiovascular endurance. For children specifically, fencing helps develop hand-eye coordination, balance, and quick reflexes. It is often recommended and beneficial for children who may have difficulty with team-based sports, have learning challenges or ADHD.

Learning to compete, be a member of a team, and respect the sport and its officials are lessons which carry over to daily life and other sports, and will last a lifetime in fencing. In fact, in veteran fencing (ages 40 and up), there are regularly competitors in their 60s, 70s, and 80s. Many colleges and universities have fencing teams, which means scholarships are available to be earned.

For All Ages and Skill Levels

With locations in Manhattan, Westchester (Port Chester), and Connecticut (Chelsea Piers in Stamford), offering instruction in saber, foil and épée fencing, there are options that can work for children of all ages and skill levels. From beginners to the more advanced, the day is programmed with fencing fundamentals, footwork, coordination-based games, fencing matches, and above all, fun. While loaner equipment is initially provided, Morehouse Fencing gear is available to be purchased.

Camps generally run each day from 10am to 3pm with early drop-off and late pick-up options available. Private lessons are also available. Each week ends with a tournament that consists of bouts which often get more competitive as the summer progresses.

The camps are staffed by the TMFC elite coaching staff of men and women, which includes Olympians, national and NCAA champions.

We The People, Demand Action