Roaches, rats, and … turtles? Red-eared sliders, a type of turtle categorized as an invasive species to New York City, has become a huge problem for the ecosystem of Central Park, and hazardous to humans who come into contact with them.


The problem stems from a once legal market of selling baby red-eared sliders. These tiny little turtles are very cute and often come with a promise that they will not get much bigger. In reality they get much larger and challenging to care for.

According to National Geographic, “More than 52 million red-eared sliders were legally exported from the United States between 1989 and 1997, many of them to China, according to the International Union for Conservation of Nature. Many more are sold illegally through a network of pet shops, street vendors, and websites.”

Red-eared sliders can get very large, and caring for them is timely and costly. They also carry salmonella, which puts people at risk of getting sick. The problem is that most people don’t do their research before buying them, and before you know it, these cute baby turtles aren’t so little anymore – and then what happens to them?

Unfortunately, people are dumping them off in the ponds of Central Park. 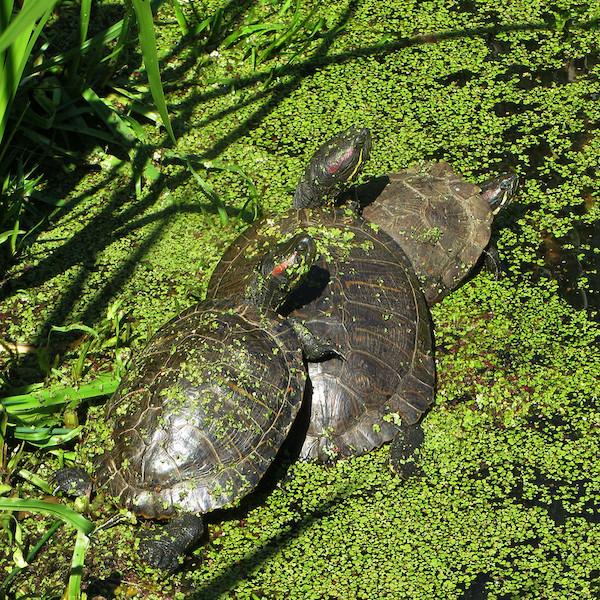 “Indeed, up to 90 percent of the sliders in this pond—the vast majority of which are hidden beneath the murky water—are likely former pets, says Allen Salzberg, publisher of the HerpDigest Newsletter and longtime member of the nonprofit New York Turtle and Tortoise Society,” reports National Geographic.

The red-eared sliders are adaptive and can do well in a variety of environments. They can go months without eating by slowing their metabolism down, and grow quickly when they have an ample food supply. The Central Park ponds provide adequate food for the huge population of red-eared sliders, including all the hotdog and potato chip scraps they find.

While the red-eared sliders are doing alright, other species are not doing well.

“Spotted turtles, musk turtles, map turtles, bog turtles, wood turtles, painted turtles, Eastern mud turtles, and diamondback terrapins all used to share ownership of New York’s waters, keeping each other’s populations in check. But competition with red-eared sliders for food and space to bask in the sun – crucial for the cold-blooded creatures – has caused native turtle populations to drop. For instance, eastern painted turtles are the most common species in New York State, but have declined in some areas, in part due to red-eared sliders,” found National Geographic.

Walking in the park, you will often see the red-eared sliders lining up to bask in the sun. Turtle Pond is a beloved location were people go to see all the turtles. Now if you look, there isn’t much variety.

There is a law that prohibits the release of any animal into the parks, but historically, park rangers haven’t had much luck enforcing it. But there is an initiative to educate people about this policy, as some well-intentioned people may be surprised that this is not the best option for turtles.

Because the underground sale of red-eared sliders is on the rise, it’s important to get the word out about these turtles, and how to re-home them properly if needed. Experts say that there is no perfect solution to this problem. Humane euthanasia has been mentioned as a realistic option. Let’s hope to avoid that option.

Finding a sanctuary or shelter to take in the discarded turtles is becoming harder because of how many there are. Remember, these are living creatures that are sensitive and smart.  These turtles can often live 50 plus years as well! Perhaps we can all do our part to share this story and educate people about the problem before it becomes worse.

Is Book Culture in Danger of Closing?