Home
Food & Drink
The Best Burgers on the Upper West Side

When I was initially asked to write about the best burgers on the Upper West Side, I was pretty sure I had my list mostly locked down with maybe one spot I was still debating. And then JG Melon closed and I had ANOTHER spot to fill. But several burgers later, I feel confident in my choices.

We are fortunate to have many good Upper West Side restaurants with burgers to choose from. So the difficulty is really in picking only a handful. There is only one place on this list that has locations outside of NYC, but I feel the burger is just too good and iconic to ignore. There are also many places that have OK burgers that become great when you add a lot of toppings and sauces to them. Those places are not on this list. The places on this list have been judged by their most basic or signature burger – with cheese, because burgers love cheese. So, I don’t have any kosher spots on this list, but there are definitely some great ones on the UWS.

Perhaps it’s because my dad’s a Brit, but I have an affinity for a good pub burger. I also have a love of the space (RIP All State) that the Emerald Inn now resides in since its move from 69th and Columbus Ave. But this fourth generation family-owned Irish pub has been a neighborhood stalwart for over 70 years. And it’s been a reliable burger and a beer spot for just as long.

There are no fancy combos here; just the classics. The cheeseburger topped with cheddar cheese is served on a classic sesame seed bun, which I think is too often overlooked these days. The $14.95 platter comes with thick (but not steak) fries, slaw, and a pickle, which is a pretty good price in this area which is pretty packed with burger spots. I generally like my burger between a medium and medium rare, and for a pub burger I tend to order mid-rare. It usually gets cooked closer to medium and thus hits my sweet spot. Just as the All State was reliable for my friends and family during the darker dining days of the UWS, The Emerald Inn remains a reliable burger spot in a sea of high end, high priced options and chain restaurants. 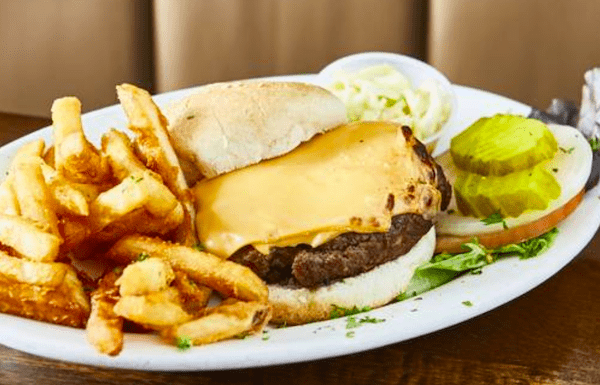 This was a new one for me. A fellow food tour guide suggested this spot to me, somewhat reluctantly, as he said: “a little yuppie for my taste, but they make a good burger.” But I am so grateful that he put me on because I’ll definitely be back. The ambiance is definitely a little hipper than most spots on this list, but it’s really comfortable and the prices are pretty good considering the sleek look and feel.

I went on a Saturday brunch expecting a hopping crowd and it was quite the opposite. Nobody Told Me opened this past summer and started offering brunch service 7 days a week in September. The menu has a great variety of options, but I was there for the Nobody’s Burger: “double patties, cheddar, hawaiian roll, special sauce, pickles, fries” And if that sounds somewhat familiar, it’s because it is a Big Mac for grown-ups! I have plenty of nostalgia and feelings attached to the Big Mac–I even wrote a comedic piece about it.

But this was a revelation.

What could that old classic be if it were actually made with good ingredients, and in the proper proportions to fill an adult human? It would be and is the Nobody’s Burger. Everything about this burger is great. The patties are each topped with fully melted cheese and their size matches that of the bun. The pickles, special sauce, and shredded lettuce all come together for the perfect bite of salty, sweet, tart, and umami.

The fries served alongside the burger are also grown versions of the McD’s own … with just a bit more potato and a scent that makes it near impossible to resist. And as a general ketchup skipper, I really appreciate the “smoky ketchup” that is served on this plate as it’s much more like the kind you’d be served with a bratwurst in Germany than the overly sweet nonsense that comes out of those tiny packets. Pair it with a Bloody Maria or perhaps a less filling cocktail and you’ll be well on your way to overcoming that hangover from the night before. 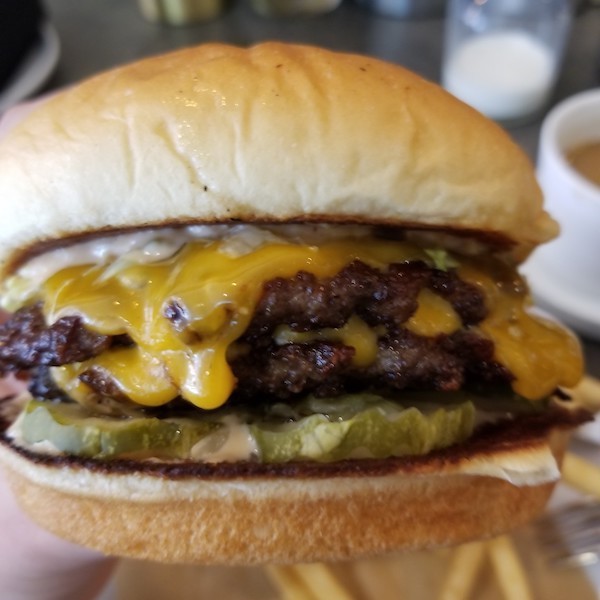 What I like about this Upper West Side bar is the simplicity of the place. You don’t come here for a large and varied menu or fancy drinks and tricks. You come here for the basics: beer, booze, and burgers. As I live uptown, the northern location is generally the one I go to, but if you’re craving a good burger and it’s happy hour then just head to whichever spot is closer to you at that moment. For in addition to drink specials, e’s happy hour includes a $6 chicken sandwich and more important for this list, a $5 burger! And lemme tell you, for a $5 burger it is impressive.

The size of the burger is smaller than the rest of the places on this list – but of course it is, it’s FIVE DOLLARS. I wasn’t asked for a cook temperature, which may be a problem for people who prefer a more well-done patty, but for me, it was a perfect medium. The special sauce topping the burger was a great compliment to the meat, and if I had any criticism it would be that they could add a little more salt to the grass-fed beef. But I appreciate the quality of the ingredients and it comes through loud and clear. One burger will probably not be enough to fill you up, but there are enough add-ons that will complete the meal without putting you over $12. 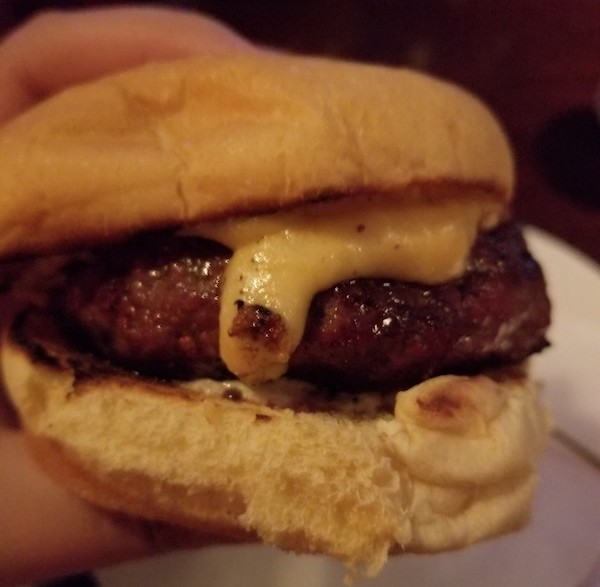 Here’s the one spot I mentioned that has locations outside of NYC, but it’s only  two: one in DC and one in Philly. But this is truly an icon of burger joints. While they’ve only been running their Lincoln Center restaurant since 2007, they’ve been making burgers in this city since 1884, which means they’ve had quite a long time to get their burger-making right. And sure enough, I’ve never been and had a disappointing burger.

Usually, I order The Cadillac, which supposedly got its name from Nat King Cole’s proclamation that it was “the Cadillac of burgers” and I definitely think he’s close. But after trying the classic Clarke Cheeseburger, I am happy to say it stands on its own.

Unlike most of the cheese-topped burgers I had, this one is topped with American cheese, which on a burger, is a solid choice. The melt-factor of the American cheese tends to permeate through the meat, adding another level of flavor to the sizable burger, that at under $20 comes with fries or onion rings, and in my mind is a great price for this legend. These guys have been cooking these burgers for so long that I know I can trust a medium to come out exactly as it should, and so that’s what I order from these fine food purveyors. And if you want something extra special, try the wagyu.

P.J. Clarke’s also made our list of best mac and cheese. 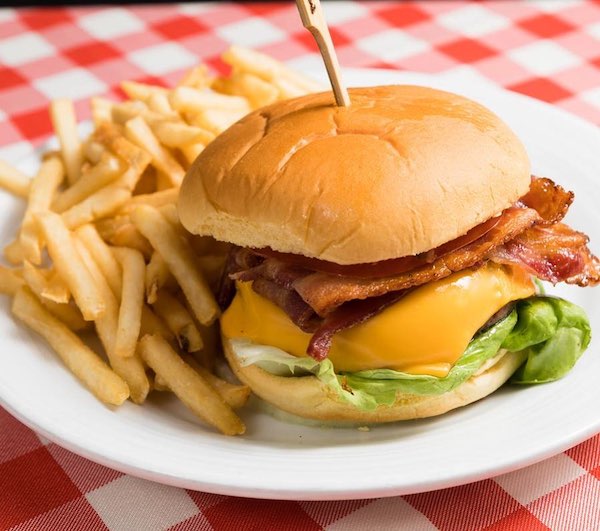 Do you have a place that you frequent so much that you sometimes take it for granted? For me, that place is Toast. While technically in West Harlem, Toast (Uptown–as it did briefly have a location within the stricter borders of the UWS), has been serving burgers and more for nearly 2 decades and doesn’t have any signs of stopping anytime soon. This place is such a gem that many of the regulars have been coming here since its earliest days. Or at least since they arrived to the neighborhood. I personally have lived here since 2008, and started coming to Toast about a year or two before that. It has a pretty low turn-over rate for an NYC restaurant, which adds to the charm of the place.

But let’s not forget about the food.

I remember the first time I ordered a dish outside of the standards for bar food and how shocked I was at the quality of it. Over 10 years later, and I have my go-to orders, which include a recently discovered burger combination that I love: the bison burger with jack cheese and bacon! BUT, for this exercise, I had to keep it simple. And for the first time in years, I ordered a cheddar cheeseburger, cooked medium.

And with every bite, I was reminded of why I so rarely leave my neighborhood when I have a hankering for beef. This sizable burger is very much a two-hander and with such a basic order, the building blocks of success for any combination after it becomes clear. The ground beef used has the perfect ratio of fat to give you that flavor and tenderness that a perfect burger requires. Then it’s expertly seasoned with salt and pepper so that you don’t NEED to add other flavor enhancers. But if you love some cheese as I do, then the creaminess of that cheddar just enhances what is already a damn good burger.

And if you do want something more, you have a variety of ways in which you can customize this meal. But at $12 for a cheeseburger with fries or salad, you can’t do much better than this. 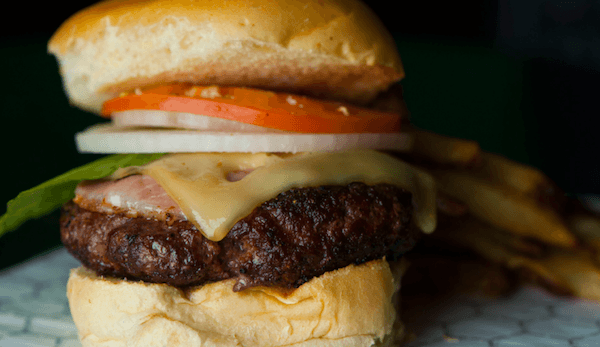