Home
Other
Playgrounds on the Upper West Side

There are tons of playgrounds on the Upper West Side. Playgrounds here come in all kinds of themes, settings, and sizes. Some of them look like real urban jungles while others offer a wild retreat within some of the best parks in NYC. Continue reading below to check out which playgrounds will keep your littles ones entertained until the sun goes down. Get out there and get exploring!


In addition to the playgrounds listed on the following pages, there are some small parks on the Upper West Side which are lovely spots to let the little ones frolick!

Located in the heart of Riverside Park, this wet and wild playground has a river running through it. This makes River Run the ideal spot to cool off during the summertime. There’s an area for toddlers that includes a huge sand pit, seesaws, and a water fountain. Picnic tables are available and many families pick this playground for an outdoor birthday celebration. 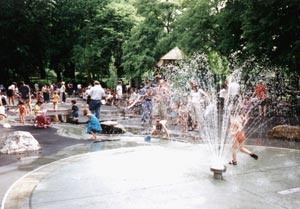 This playground is located in Riverside Park (next to the Soldiers & Sailors Monument) and features an oversized collection of animal sculptures. Hippo Playground is large in size and has something to satisfy each child’s need for play. There are tons of slides, swings, and monkey bars! The playground opens from 6 to 1am and hosts a series of events during the summer season. They also host the annual Hippo Playground Spring Fair! 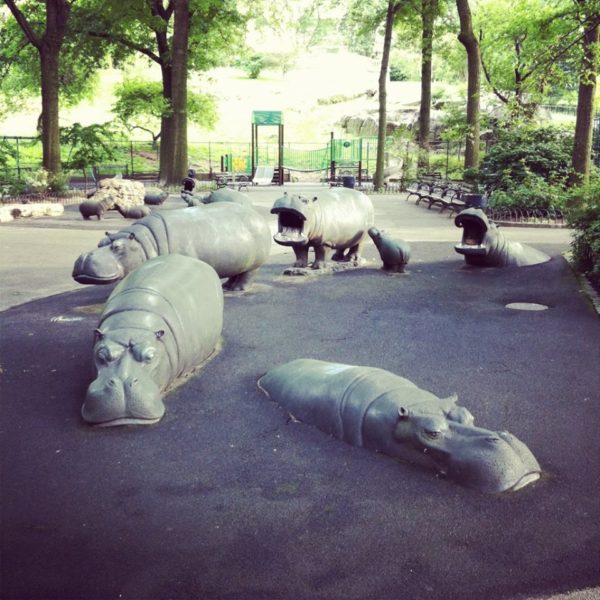 Matthew P. Sapolin Playground is named after the man of same name who served as the former Commissioner of NYC Mayor’s Office for People with Disabilities. Sapolin passed away in 2011 due to cancer and this playground is dedicated to his legacy. The children’s area features sculptures of life-sized musical instruments for children to climb on as well as a variety of bridges, slides, and swings. The adjacent basketball and handball courts are a treat for the older children. 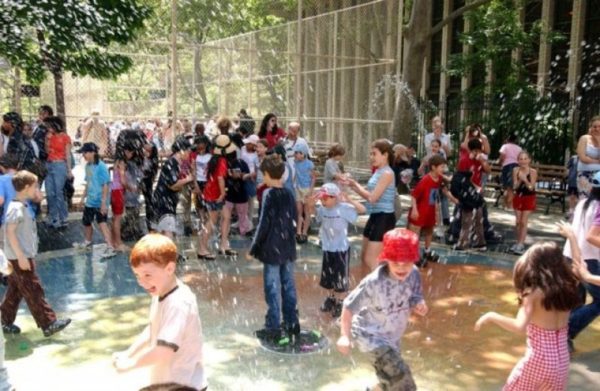 Sol Bloom Playground is named after the man of the same name who became the embodiment of the American Dream. Mr. Bloom was the son of immigrants who saw tremendous success in his career in the public eye. The playground’s theme of sun and flowers can be seen throughout the children’s play area where there are game tables and a lanyard flagpole. Make sure your little ones get to spot the animals from the film “The Wizard of Oz”!

This playground is open from 6am to 6pm and is named after the African-American author and orator of the same name. Frederick Douglass was an avid reader of abolitionist literature who later on became a fierce advocate for human rights. The playground features a replica of a life-sized camel, a handball court, a turf athletic field, a ground-level mini pool, and plenty of benches for parents to sit on. 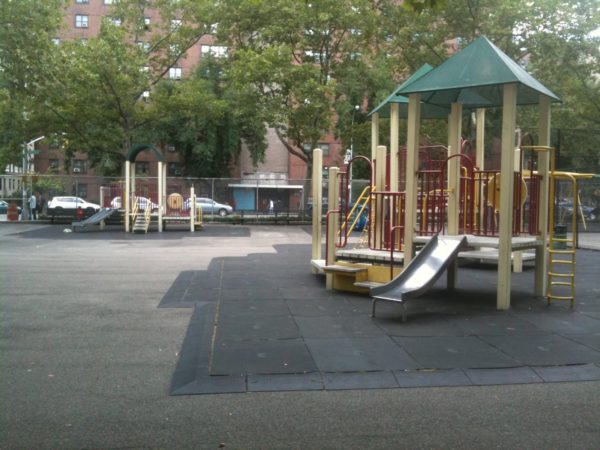 Tecumseh Playground’s name comes from legendary Civil War general Tecumseh Sherman. He fought during the Mexican War and was one of America’s best known generals at the time. The playground has a Wild West theme to it and children will feel like they’re in the midst of a train ride taking them from New York to the Far West. There is a wagon climber, buffalo sculptures, a swing set, and a jungle gym. Tecumseh Playground is gated for safety measures which should provide parents with an added piece of mind. 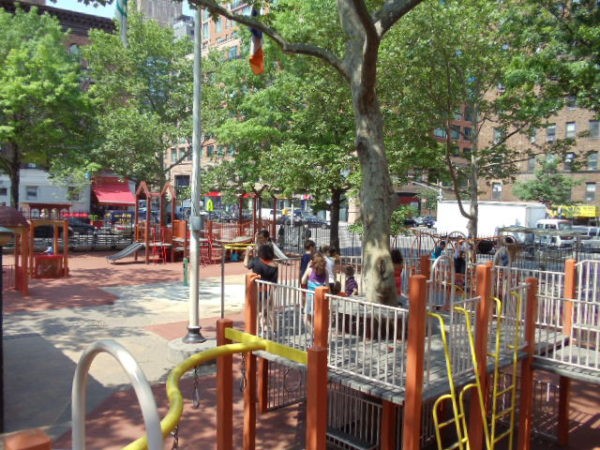 Elephant Playground is located in Riverside Park and has two separate play areas. One of them is for toddlers and the other is for older children. The name for the play area comes from the elephant-shaped sprinklers. They are the perfect way for your little ones to cool off during the warmer months. Other features in this playground include rope ladders, rock walls, and built-in toys such as telescopes and bongos. There’s a bathroom and a basketball court nearby. 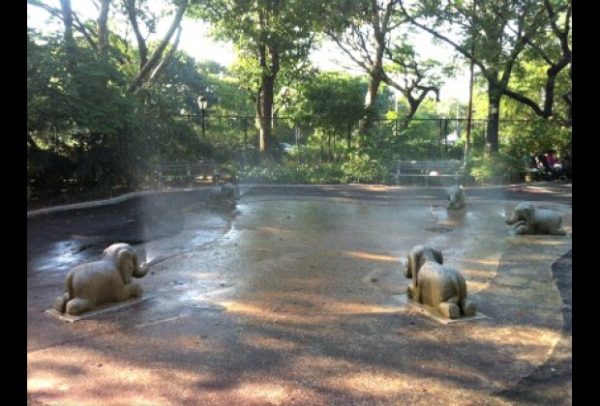 The name for Bloomingdale Playground is related to the rich history of the Upper West Side. The word bloomingdale means “vale of flowers” in Dutch. The original settlers were from the Netherlands and were drawn by the area’s natural beauty. The playground features a climbing wall with a slide, a bridge, and a neat set of swings. 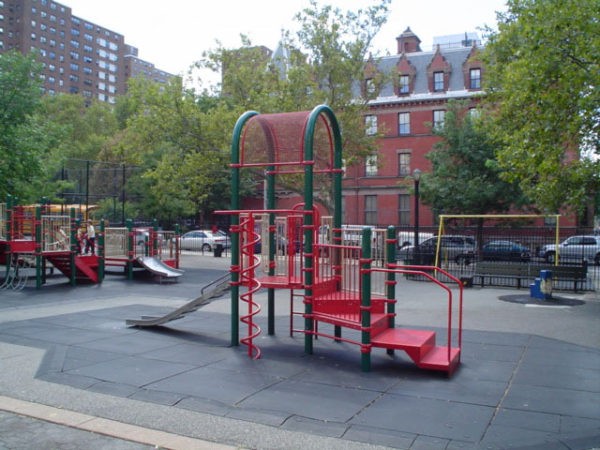 The Diana Ross Playground is located right next to Summit Peak which happens to be the highest naturally-elevated point in all of Central Park. The playground was founded by singer Diana Ross after giving a concert on the great lawn in 1983. The facilities are in great condition and toddlers will love digging their way through the massively-sized sand box. Children will surely enjoy the many wooden structures that offer plenty of climbing, sliding, and exploring opportunities. 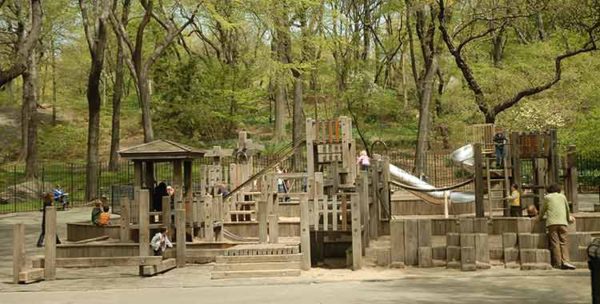 Located in Riverside Park, this playground offers panoramic views of the Hudson River. The play area comes alive with the statues of two giant dinosaurs: one of a triceratops and the other of a hadrosaur. They are made out of yellow fiberglass and children will have a blast trying to climb them. The playground also has two sandboxes, swings, and a spray shower that’s turned on during the summertime. 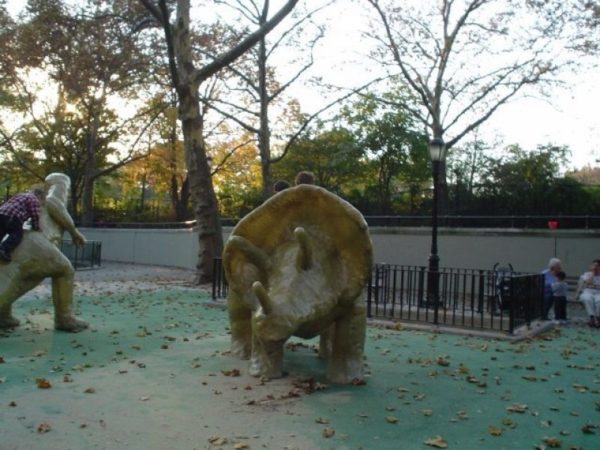 The Mariner’s Gate Playground is open from 6am to 1am and is located inside Central Park. The playground recently went through a renovation and now features more toys and play areas for toddlers. There are structures which feature climbing walls, tunnels, slides, swings, and water sprinklers. A complete fun zone exclusively designed for kids! 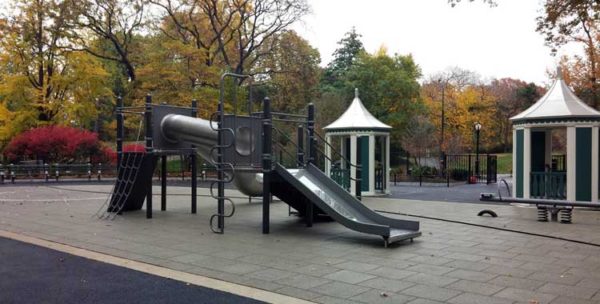 Heckscher Playground is the oldest playground in Central Park. The playground also happens to be one of the largest in the city clocking in at almost two acres in size. Heckscher underwent a full renovation in 2006 in order to update and modernize some of its play areas. The park’s wide and open space makes it look like a real outdoor forest. Children will have a blast trying to climb the stone pyramid, playing in the sandbox, and enjoying the classic swing and slide sets.

Tarr-Coyne Wild West Playground offers hours of fun under the sun for toddlers and older kids. The playground’s Wild West theme makes it resemble a town that was built at the height of the Gold Rush. There are different play structures made out of wood that look like forts. The space was renovated in 2015 and play areas are now arranged according to age group. 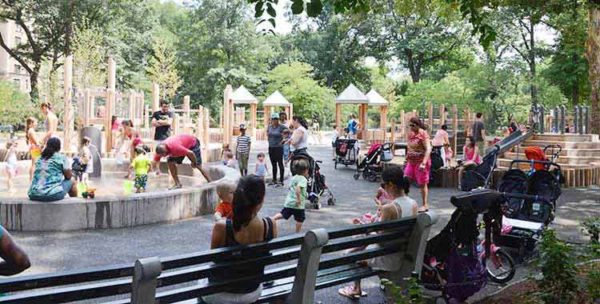 Adventure Playground stays true to its name by offering children a number of fun-tastic experiences. The play areas feature lots of climbing structures that include a conical climber, tunnels, and slides. During the summer, a paddle stream makes its way through the playground. Children will have a blast playing in the large sand area and getting wet when the sprinkles get turned on. Some areas of the playground are wheel-chair accessible. Adventure Playground is open from 6 to 1am. 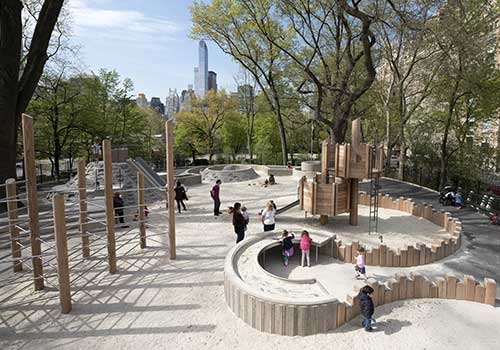 108th to 109th Street between Columbus and Amsterdam Ave.

This neighborhood playground spans an entire block and offers a complete afternoon of fun for the little ones. From tall climbing structures to twisted monkey bars and slides, they’ll have a guaranteed fun time exploring its many corners. The playground is named in the memory of star athlete Anibal Aviles who died in the Vietnam War after joining the Marine Corps. 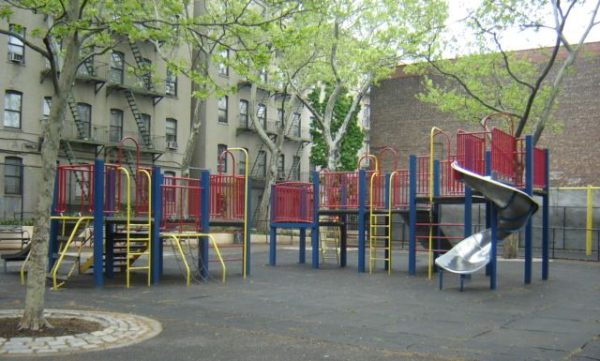 This playground is one of the newer offerings for children on the Upper West Side. Located next to the recreation center of the same name, Gertrude Ederle offers a full afternoon’s worth of entertainment. There are three different play areas featuring several monkey bars and climbing structures. Parents will surely appreciate the conveniently placed picnic tables and the thirst-quenching drinking fountains.

Little Engine Playground opens from 6am to 7pm and is located in Riverside Park. Though small in size, Little Engine packs a punch. Children will have a blast trying to climb the engine train and enjoying the different play areas. This charming playground also offers tons of water features during the spring and summer seasons. 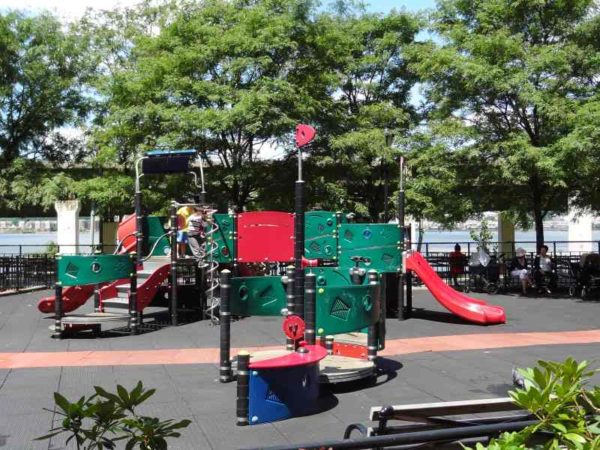 Writing Classes and Programs on the Upper West Side