Home
Food & Drink
Trader Joe’s on the Upper West Side

When the Trader Joe’s on the Upper West Side opened its doors on Broadway and West 72nd, it brought more than competition to the UWS grocery business . . . it brought a lot of fun. It’s not just the Hawaiian shirts sported by the always-upbeat staff or the secret code of bells ringing that communicate something to someone, it’s a sense of whimsy from the products to the prices to the displays at Trader Joe’s Upper West Side.

Trader Joe’s on the Upper West Side

A bit of history from the store in a moment, and a look at Upper West Side supermarket competition, but first how about a sample of the hand-painted signage throughout the store. (You’ll see the not-so-subtle Broadway connections.)

There’s “Pear”—a groan-inducing pun on “Hair.” The Upper West Side Trader Joe’s wouldn’t be complete without the “West Side Grocery” poster that looks a lot like a “West Side Story” poster. And they get really creative with “Trader Joe’s and the Amazing Everyday Low Prices.” 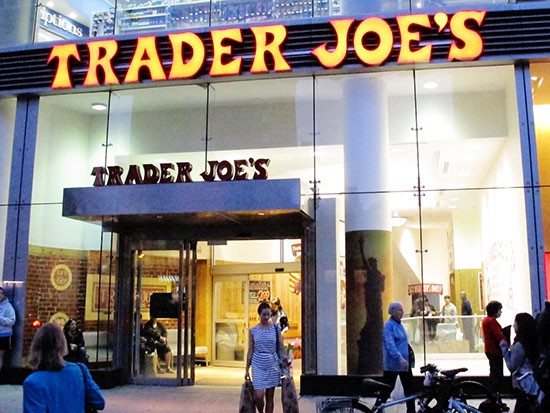 Actually, that one makes sense. A hallmark of Trader Joe’s – and a plus for budget-conscious New Yorkers shopping at the Trader Joe’s on the Upper West Side – is prices that are the same chain-wide, so you pay in New York what your friend pays in Austin or Boston or California.

No mistake, it’s value that brings most people to the Upper West Trader Joe’s, but the environment created by a corporate culture committed to a good shopping experience doesn’t hurt.

Trader Joe’s started out as a 7-Eleven-like chain of SoCal convenience stores in 1958. By 1967, the founder of Pronto’s, as the chain was then known, whose name, by the way, was Joe, worried about competing with the convenience giants. So, Trader Joe’s was born as a specialty grocery store that spread quickly throughout Southern California, where the majority of stores are now.

Branching out to the East Coast with an invasion of the Boston market, Joe’s made its way to New York in 2006, where it now boasts 5 locations, including the Upper West Side Trader Joe’s.

The privately held chain was sold in 1979 to a trust of the family that owns worldwide grocery giant Aldi. And like Aldi (there’s one of those on East 116th Street, by the way) Joe’s keeps prices down by stocking a limited number of items and focusing on private label goods. A typical Joe’s has about a tenth of the variety of products as a large grocery store, and about 80 percent of those are Joe’s brands.

Just about any product with the name “Joe’s” on it, is going to be a good buy. (The cereal prices can’t be beat.)

Can there be too much of a good Joe’s thing? Those good prices and good environment bring in a lot of people often leading to crowded aisles and very long checkout lines, particularly at the end of the work day and on weekends. But don’t let that put you off; even at their longest the lines move quickly. (A New York Times article on grocery store lines named Joe’s second-fastest behind Whole Foods.)

And, as mentioned above, the Joe’s staff members keep it light and bright. (And their secret code of bells ringing at the checkout counters? One bell means “Open another register,” two bells is “I need help answering a questions,” and three bells calls a manager.)

The Upper West Side Trader Joe’s has been good for local residents. Other stores have responded with more aggressive discounts, better management of their lines and added personnel (not to mention friendlier).

So, welcome to the Upper West Side, Trader Joe’s. Those of us who buy groceries in the neighborhood like what you’re bringing. 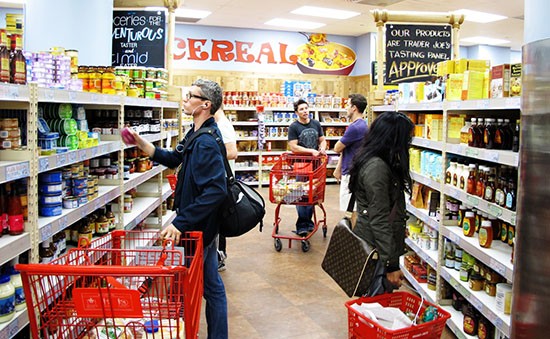 Have a Happy Mom’s Day with these Ready-To-Go Meals!