A couple who resides at One West End recently decided to tie the knot at their Upper West Side apartment building – rather than continue postponing the wedding ceremony they had booked at a rooftop in Lower Manhattan. The ceremony was originally scheduled to take place in mid-May. Due to the pandemic, it was pushed to August, and ultimately cancelled completely.

Once the couple got engaged (but before they realized how complicated setting a date would become), Rachel Lerch, Lifestyle Director for One West End started helping them coordinate. She introduced them to their wedding planner and some other vendors in the industry, while continuously acting as a sounding board for them.

When it became clear that the Lower Manhattan venue wasn’t going to pan out, Lerch made it her mission to find an alternate location. She reached out to several rooftop bars and terraces and presented a handful of options to the couple.

But ultimately, as they love their building, the couple decided it would serve as the perfect setting for their wedding.

Luckily, the building’s management decided to allow them to have an under-the-radar, early morning rooftop ceremony.

At 6:30am a few Fridays ago, they enjoyed a tiny rooftop wedding ceremony with their officiant, a photographer and their wedding planner. 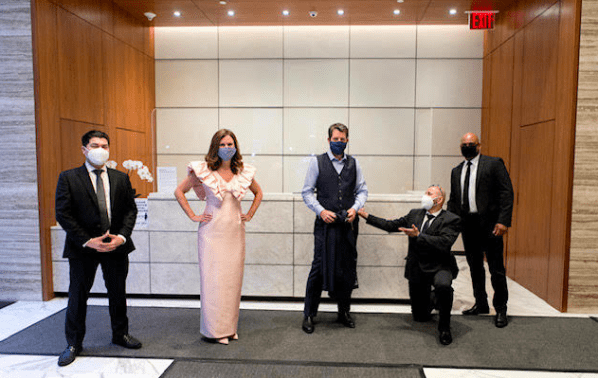