“The Upper West Side is a Summer Festival”? This rarely heard (and, O.K., perhaps just-coined) slogan may not glide trippingly over the tongue, but it certainly rings true. For the Upper West Side hosts literally hundreds of free and cheap performances each summer— and 2014 is no exception. Even with this article limited almost exclusively to musical offerings, it still had to be split in two, so as not to overload our time-pressed readers.

Though its major resident companies (the Metropolitan Opera, New York Philharmonic and New York City Ballet) get some well-deserved time off during the summer, Lincoln Center remains the cultural focal point not only of the Upper West Side, but the City as a whole—if not the entire U.S.A.—throughout the year. So where better to begin cataloging the panoply of UWS summer programs? Of course, if your appetite for inexpensive summer music is insatiable, our neighborhood offers considerably more. But you’ll have to wait for Part II of this article for info about other local options. In the meantime, let’s review some Lincoln Center summer highlights.

Strictly speaking—all right, not that strictly, it’s pretty straightforward—this is a dance event. But of course few dance events can get very far without music, and that goes for Midsummer Night Swing as well. So for three weeks of Tuesdays through Saturdays you can catch your favorite dance music—and boogie if you must—at this annual event. 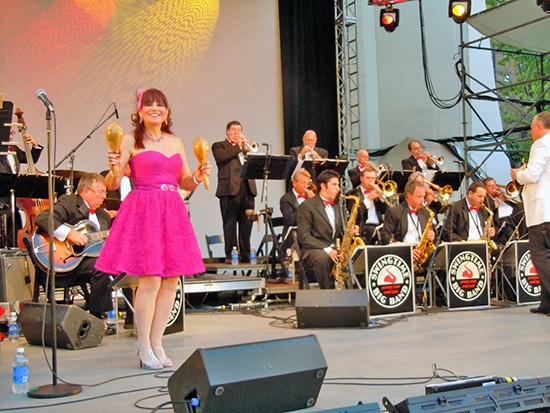 Starting the last week of June, a dance floor will materialize right in the middle of Lincoln Center Plaza to accommodate sessions of Swing, Latin, Disco and more. Check out the website for the particulars. On most nights, a group dance lesson (6:30—7:15) will be followed by two live sets, 7:30—8:30 and 9:00—10:00. Admission is $17 (or less with a multi-day pass or group admission). But for those who just want to watch or listen from beyond the dance floor, there’s no charge at all.

If you need to fuel up, you’ll find a Hill Country Barbecue Market stand as well as drinks, alcoholic and otherwise. Until 5 PM, admission tickets can be purchased or picked up at the Avery Fisher Hall Box Office (Broadway & 65th). After 5:30, go to Damrosch Park, at 62nd. Weather cancellations (with refunds) won’t be announced until 8:30. No refunds for cancellations after 8:30.

Though it won’t be at Lincoln Center, the New York Philharmonic of Lincoln Center will perform two concerts on Central Park’s Great Lawn (also on the Upper West Side), on Friday, July 11th and Monday, July 14th. Each will start at 8 PM and run for about 90 minutes. Program details are on their website, here. For weather updates, call the Parks Hotline at (212) 875-5709. It’s best to enter the park at Central Park West and 81st or 86th Streets, and just follow the crowd to the site. You might find fewer than the record-setting 800 thousand-or-so people, but there’s not much chance of missing the Lawn. On the other hand, if you hope to meet anyone there, try to find a really distinct landmark and be sure your phone is well-charged. 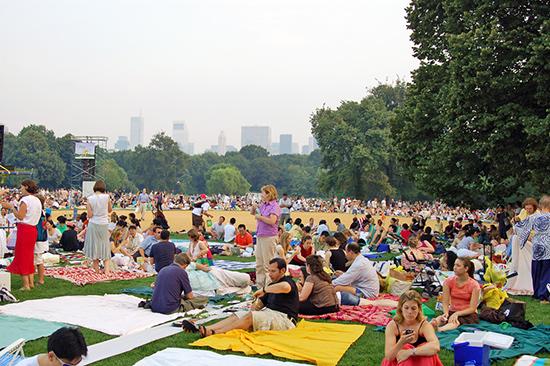 While the music may be “serious”, much of the audience isn’t. That is, many tend to go mainly for picnicking and the festive atmosphere and don’t necessarily follow traditional concert hall protocols. So some people might want to go a couple of hours early to stake out a claim close to the bandshell, where there’s less distracting chatter. If you really prefer to focus on the music, you should be able to find a fairly secluded spot beyond the perimeter of the Lawn, far from the madding crowd, but where you can still hear well.

In addition to great music and creative alfresco dining opportunities, there’s a lively fireworks display after each concert. And if your interests run entomologically, you might also appreciate viewing some of the thousands of lightning bugs that seem to find the Philharmonic just as entrancing as their human cousins.

The Philharmonic will also offer a relatively brief free concert (indoors, this time, at Avery Fisher Hall, at 64th St., west of Columbus) on Saturday, July 26th, at 7:30 PM. Tickets will be distributed at 10 AM on Lincoln Center Plaza that morning, though you may want to line up a half hour or so early to improve your chances for a seat. Details are on their website, Mostly Mozart.

Lincoln Center Out Of Doors

If you haven’t had your fill of free summer music by late July, just try to make that claim after three chock-full weeks of Lincoln Center Out Of Doors, one of New York’s most comprehensive summer programs. You’ll find multiple shows on many days—and risk complete sensory overload on the weekends—mostly at one of the plazas between 62nd and 65th Streets, west of Broadway and Columbus. The emphasis is on American and world music, but there’s also dance, film, and special programs for kids. Headliners for 2014 include Roberta Flack, Rosanne Cash, Cassandra Wilson, Emmylou Harris, the Paul Taylor Dance Company and a tribute to Pete Seeger. And, you guessed it, it’s all free. 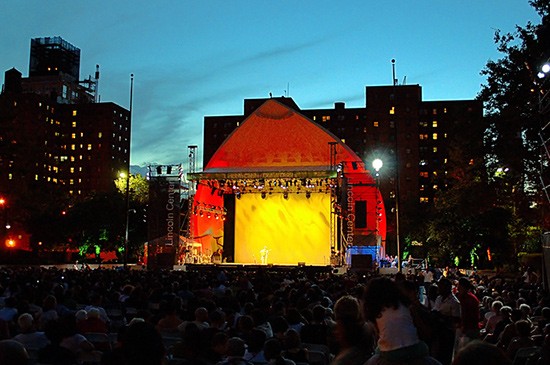 Check out the program details at Lincoln Center Out Of Doors, where you can also catch sample videos of many of the acts, to help identify those you might find most appealing. Except for weekends, shows typically begin in the early evening. There’s usually enough seating but, for the bigger names, you’ll do well to arrive early. A Street Food BBQ stand should satisfy your craving for finger food; and you can consume beverages in Damrosch Park (at the southwest end of the complex). Restrooms are usually available at the rear of the bandshell in Damrosch Park, as well as in Avery Fisher Hall.

Metropolitan Opera HD on the Plaza

Tickets to a single Metropolitan Opera performance can run to well over $300. So what’s this NYC institution doing on a Free & Cheap listing? Well, the Met will once again be broadcasting some of its grandest productions on a huge high definition screen, right on Lincoln Center Plaza (between 63rd and 64th, off Columbus Avenue). For ten consecutive nights, starting in late August, you can grab the best orchestra seats for the cost of the sun in the morning or the moon at night. When it becomes available, you should find a link to this year’s program on their website.

Rain or shine, shows begin when it’s dark enough for a sharp image, usually around 8 PM. A few thousand metal chairs are set out on the Plaza, the weak-tushed can buy cushions from roving vendors—but you may have to arrive an hour or so early to claim a seat, depending on the weather and the popularity of a particular opera. But don’t fret. There’s usually plenty of room on the side or in the back for those who bring their own seating. Also, with limited food options on the plaza, you might want to tote your own eats.

Perhaps it’s a bit less glamorous than inside the opera house. And there might be some advantages to a live performance. But there are plenty of upsides as well. For example, there’s no lengthy intermission. And English translations are right on the screen, instead of the seat in front of you, so your pupils needn’t frantically pivot back and forth between words and action. There’s also the option of leaving your diamond tiara in the vault. And, if you’re still not convinced, don’t forget that $300-or-so still in your wallet.

Just a hop and a skip (at Broadway and 62nd) from the main Lincoln Center complex, the Rubinstein Atrium remains active during the summer. If offers two additional ways to enjoy music (and other performing arts) at little or no expense. Most every Thursday, at 7:30 PM, Target sponsors free performances in the Atrium by a wide variety of local, national and international artists. The capacity is fairly limited, so you should probably plan to arrive by 7 or earlier to get a seat. The calendar is available on their website at Rubinstein Atrium. 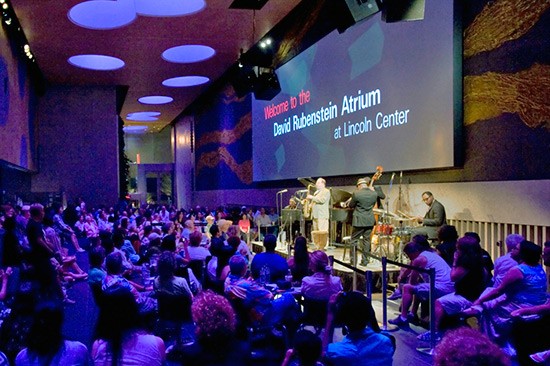 In addition to the on-site performances, the Atrium offers same-day discount tickets for Lincoln Center events (often at 50% off) at the Zucker Box Office, Tuesdays through Saturdays. You’ll also find an outlet of Tom Colicchio’s witchcraft café, restrooms, a Tour and Information Desk and free Wi-Fi access.

Live Music Bars on the Upper West Side

Bridge is Back at the JCC!

Stars of David: The Musical!