Home
Events
UWS Free and Cheap Summer Music Part 2 : Beyond Lincoln Center
[dropcap style=”font-size: 60px; color: #9b9b9b;”]W[/dropcap]ith all the goings-on at Lincoln Center this summer (see Part 1 of this article), you might think that the Upper West Side would be totally spent, with little music to offer beyond a few construction worker whistles and perhaps more than a few taxi honks. But you’d be wrong, wouldn’t you. Because, even excluding our cultural epicenter in the West 60s, the little old UWS offers more free summertime music than do most entire cities. Here are some of the non-Lincoln Center highlights:

Central Park’s Rumsey Playfield, at 71st and 6th Avenue (well, that’s where it’d be if these streets ran through the park) is Manhattan’s venue for New York’s biggest free performing arts festival, SummerStage, where it hosts dozens of shows from early June through the end of August. The best access for Upper West Siders is at 72nd and Central Park West. Performances run the gamut from dance to film to poetry but, most particularly, music of innumerable origins and genres. You can find the 2014 schedule for more information.

If the metal bleachers don’t tempt you—and it’s hard to fathom why they would—you’ll find open areas inside the field to set yourself down. So you might want to bring something soft to stretch out on (but you can’t bring your own chair). Or, if you don’t mind foregoing the visuals, you can sit outside, on benches, rocks or grass, and still hear loud and clear. In fact, if it’s not too crowded, you can even pop in and out if you like. 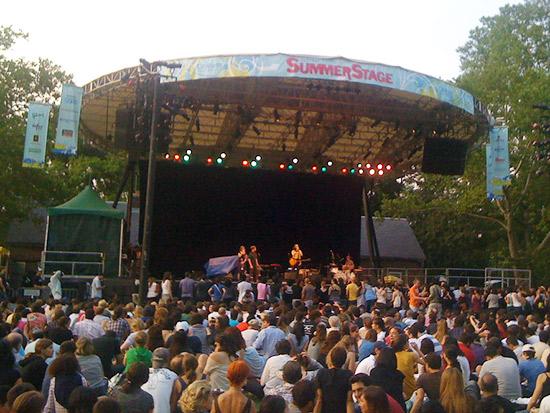 Food and drink can be purchased at both free and “benefit” performances, where there’s an admission charge, or you can bring your own eats to the free shows (but not alcohol, bottles or coolers). Also prohibited: pets, bikes, skateboards, roller blades, recording devices and flash cameras.

Gates open 60 minutes before show time on weekdays or 90 minutes for benefit performances and weekends. Depending on the weather—shows are only cancelled due to lightning—and the artists’ popularity, you might have to line up for more than hour to gain entry, but this usually isn’t necessary. Acts typically run for an hour or so (including set-up), so if you plan to see three or four different groups, prepare to stay for a while.

FUN IN THE SUN SUMMER CONCERTS

You’d think that the Rumsey Playfield would be satisfied just being Manhattan’s SummerStage site, but apparently that would be too much to ask. It seems that the little grandstander also demanded bragging rights for Good Morning America’s summer concert series, with such top stars as Enrique Iglesias, Brad Paisley, Keith Urban, Jason Derulo, Kings of Leon, Robin Thicke, Florida Georgia Line and Afrojack. The concerts run every Friday through the end of August and they’re all free (except for June 20—to see Jennifer Lopez—when you’ll need advance tickets). Check out the full schedule for more information. But here’s the kicker. Concerts run from about 7 to 9 AM, and GMA suggests arriving at around 6! If anyone’s still bothering to finish this paragraph, refer back to the SummerStage write-up for Rumsey logistics info.

The Naumburg organization has presented outdoor concerts to classical music lovers for well over a hundred years—and it’s still going strong. The setting, appropriately enough, is the Historic Naumburg Bandshell, on the Concert Ground in Central Park, just south of 72nd Street’s Terrace Drive. Enter the park at 72nd and Central Park West and walk east until you see the bandshell on your right. Starting June 24, there’ll be five Tuesday night concerts this summer, all at 7:30, rain or shine. The program details are available on the website.

In addition to the thousand or so folding chairs, there’s plenty of bench space nearby, so you shouldn’t have to arrive particularly early to secure a decent spot, unless you want to be sure of a good view. Back north across Terrace Drive, you’ll find restrooms mid-way down the stairs that lead to Bethesda Fountain. Arguably no less elegant than those at the Black Hole of Calcutta, they’re also free. 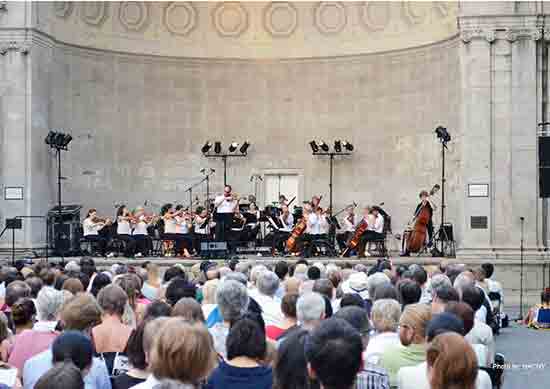 Jazz, Classical, Reggae, Folk, Flamenco, Indian, Samba. You can hear them all, and much more, at this annual series, held every Saturday at 7 PM until around 9, from June 7 through August 16. This year’s program is detailed on the website. Sit or lie—O.K., stand if you must—on the lawn by the clay tennis courts in Riverside Park and enjoy not only some great music but, with any luck, a spectacular sunset over the Hudson. To reach the lawn, just north of the courts, go through the Park via the pedestrian tunnels below the Westside Highway at 91st or 101st. (The map makes this much clearer). You’re likely to find some basic food carts nearby, but if you care to dine to the music, you might prefer to bring your own repast. Please note: there are two portable toilets by the courts. And if the weather looks iffy, call 212-978-0277 to learn whether the concert will be postponed or canceled.

Among the more modest music programs on the Upper West Side, the Verdi Square Festival will present three concerts this September: American Musical Theater, Opera and Jazz. Program details will be available on the Verdi Square Festival website. Each concert will begin at 5 PM on a Sunday and, as you might suspect, they’ll all be at Verdi Square, that is, at Broadway and 72nd Street. Plastic chairs can usually accommodate the relatively small audience. Student performers from top schools (the Manhattan School of Music and the New England Conservatory) have to compete with the tumult of the 72nd Street Subway station as well as Sunday traffic but, if history is any guide, they’ll acquit themselves very well indeed.

Not content to delight just senses of sight and smell with several thousand tulips at its April Tulip Festivals, the West Side Community Garden is an attractive venue—look for lilies in the summer—for its “Concerts in The Garden” series. This summer’s Sunday concerts, including classical and South American tunes, run from June through early July. The free performances begin at 6 pm. Enter the garden on 89th or 90th between Columbus and Amsterdam. Of course, you’re welcome to picnic if you’d like, to satisfy yet another sense, while enjoying the music. Program specifics can be found on the West Side Community Garden website.  And while you’re at it, here’s more info on community gardens of the Upper West Side. 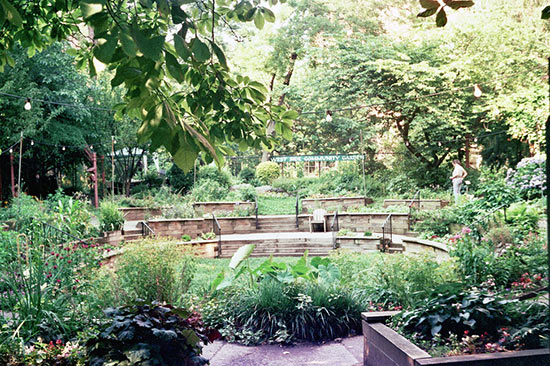 Live Music Bars on the Upper West Side

AMNH Presents The Power of POOP