When small businesses close up shop we all feel a loss. But now that national stores are also leaving our streets, politicians are calling it a crisis. UWS Save our Stores, an organization formed earlier this year, hosted a public meeting on December 5th to discuss the issue of vacant storefronts. City representatives Comptroller Scott Stringer, Senator Robert Jackson, Assembly Member Linda Rosenthal, City Council Member Helen Rosenthal, and Borough President Gale Brewer were in attendance.

“We’ve lost three supermarkets. The Upper West Side is particularly worried about losing the surviving moms and pops, bodegas, and restaurants that have barely managed to survive. In fact, from 67th Street to 104th Street there are 66 vacant storefronts. That is a 20% vacancy rate,” said a representative from UWS Save our Stores.

The industry standard for “healthy” retail vacancy is 5-10%. So what is causing businesses to leave? Stringer’s recent report points to three main contributing factors behind the vacancies:

Amazon was called out for taking over the lion’s share of the shopping that people do. Stringer said “the reason this is happening according to our analysis, is there’s a basic change in how people shop. It’s called the Amazon effect. And the reason the service industry stores are doing well, like doggy daycare, is because Amazon hasn’t figured out how to get your dog home from a wash.” 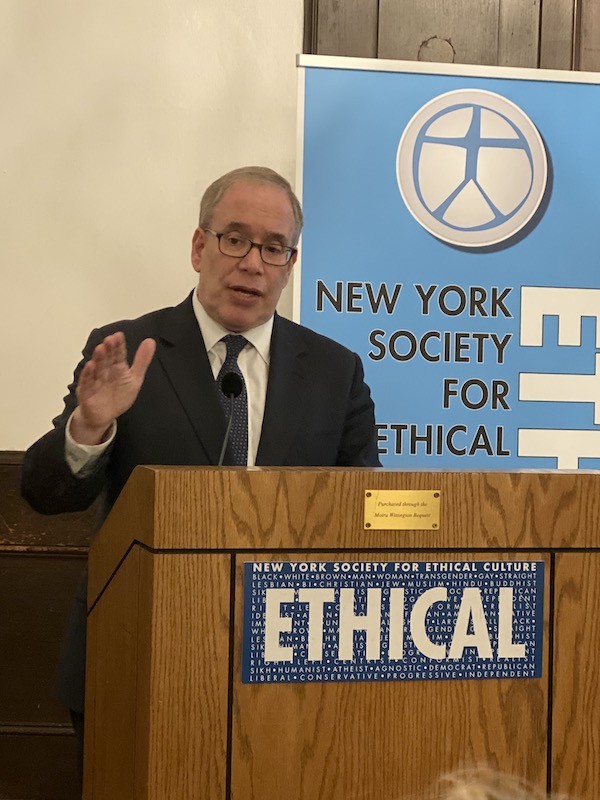 Stringer explained that it’s imperative to figure out how the retail economy can adapt. “Let me give you some data from the report that we issued about retail vacancy in New York. First of all, our report found that rents have risen as much as 68% on the Upper West Side. The amount of vacant storefront space has doubled since 2007 from around 6 million square feet to over 11.7 million square feet. Vacancy rates in the last 10 years rose by 45% from 2007 to 2017.”

The question is what’s keeping those taxes so high; is it inflated property valuations?

Scott Stringer’s reports show that property tax payments by retail tenants doubled from 2005 to 2017. This accounted for an increasing share of total rates paid. The Real Estate Board of New York claims rents have been dropping for the last three years, and some landlords may have high rents because of their lenders loan terms.

Gale Brewer said it is important to note that landlords do not get tax breaks for keeping their storefronts empty.

There are a number of permit obstacles that create fines and violations for tenants. It becomes untenable for stores to thrive with so much red tape. Zoning, landmark designation, sheds, slow permits and license approvals all mount up against businesses and have been identified as a problem that politicians should be taking action to solve.

“We remember that one of the strategies making people feel safe back in the 70s, 80s and 90s was the vitality of the commercial space. Keep the lights on, keeps the traffic coming, more young people and seniors will feel that they can travel the city, and obviously that has become a key component to the way we live our lives,” Scott said.

Scott stressed the importance of community planning to solve this problem. He encouraged residents to put pressure on elected officials to have a say in how they want to see these spaces used. Robert Jackson echoed this call to action, saying it’s not enough to say it once; communities need to follow through with elected officials to make sure they make good on their word to solve problems. 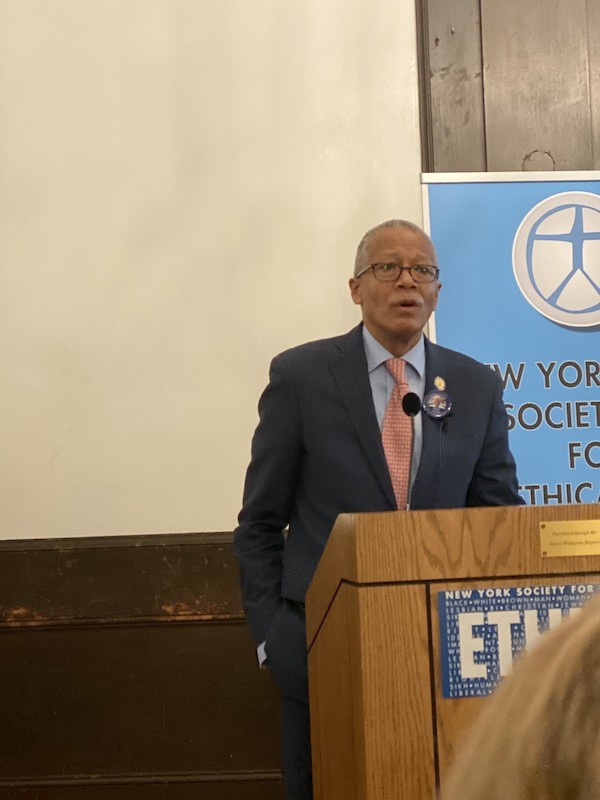 Linda Rosenthal pointed out the scaffolding problem plaguing the UWS community, and how it impacts businesses.

“It’s hard to walk a block without walking under scaffolding. And we see that stores are closing, because they just cannot remain open with no one wanting to walk under the scaffolding. It’s often dark. It’s dangerous. You can’t see what stores are there because you see the scaffolding and walk across the street, it seems safer. This is something the city really has a responsibility to correct,” Linda said.

So with all of these issues facing our stores, there are some proposed solutions in the works.

First up was Helen Rosenthal who reminded everyone to shop local.

One proposed solution at the state level is the commercial vacancy tax being sponsored by Senator Robert Jackson and also Linda Rosenthal. The aim is to amend the State tax law to impose and collect taxes on commercial storefronts that are vacant for more than 6 months.

There is also the Small Business Survival Act. This was introduced by State Assembly Member Danny O’Donnell and State Senator Julia Salazar. This bill will help small businesses obtain fair negotiations for their commercial lease renewals.

Comptroller Scott Stringer proposed eliminating as much red tape as possible. His 2015 Red Tape Committee proposed 60 ways to cut red tape and help support business growth.  This includes clear timelines for approval of permits and holds agencies accountable. The proposal would also ensure that there is prompt removal of unused sidewalk scaffolding and sheds, and create a single point-of-contact customer service representative.

To illustrate this point. Gale Brewer said, “My friend runs a flower store, and if his flowers are beyond the limit of the building, it’s a $3,000 fine from the Department of Sanitation. Yet, the building next door is happy to have the flowers. You have to have some kind of discussion. It’s not easy for the inspector question this. These are issues that have got to be worked out.”

At the city level, Helen Rosenthal’s Storefront Tracker bill was passed by City Council in late August. This will provide essential data for all legislation moving forward on vacant storefronts. Gale Brewer was behind the storefront tracker legislation, as well as a new bill sponsored by Council Member Margaret Chin to eliminate the Commercial Retail Tax for independent groceries, Murray Street to 96th Street.

It is clear that this is going to be an uphill battle for businesses, residents of the UWS, and politicians to address. It you would like more information, or to attend the next meeting, please check out the UWS Save our Stores website for more information: http://uwssos.org/