With those pesky mosquitos buzzing around, possibly carrying the West Nile virus, the Upper West Side is scheduled to get a pesticide treatment, according to the city’s health department.

“They’re going to be spraying for mosquitoes,” one worker from the New York City Department of Health and Mental Hygiene (DOHMH) said as she posted fliers earlier this week. 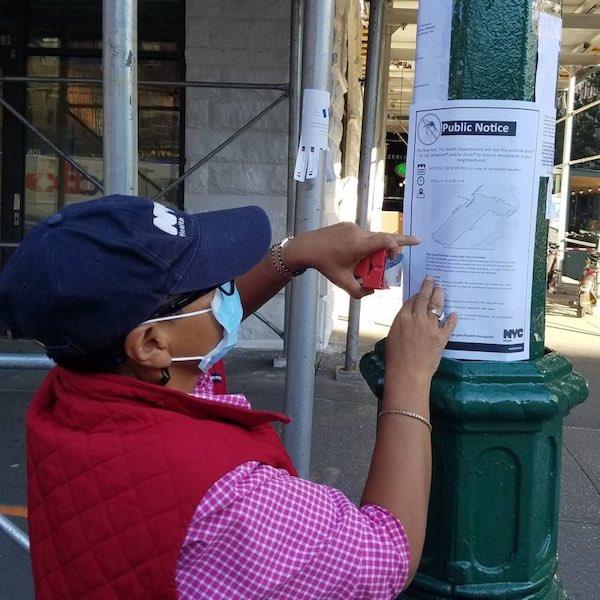 In an annual effort to “prevent or reduce locally transmitted human cases of mosquito-borne illnesses in the city” such as the West Nile (WN) virus in humans, the city’s health department monitors the larvae and adult mosquitoes in the five boroughs, according to the DOHMH’s Comprehensive Mosquito Control Plan for 2021. In areas where there is WN activity which poses a threat, the city will use adulticides, pesticides used to kill off adult mosquitoes.

One such sign of the West Nile virus in the area is the presence of dead birds, which have been seen all around the neighborhood recently (residents should call 311 to report any of these sightings). Another factor in the surge in mosquitoes is standing water (water that doesn’t move or flow). Folks should also immediately drain and empty any standing water to prevent mosquito eggs from hatching. The fine for standing water can be as much as $2,000.

Residents are advised to remain inside, close air conditioning vents or use the recirculate function on A/C units during the hours of spraying – which is set to begin on Monday, September 27 at 8:30pm and last until 6am on Tuesday, according to the notices posted all around the neighborhood by Health department workers. 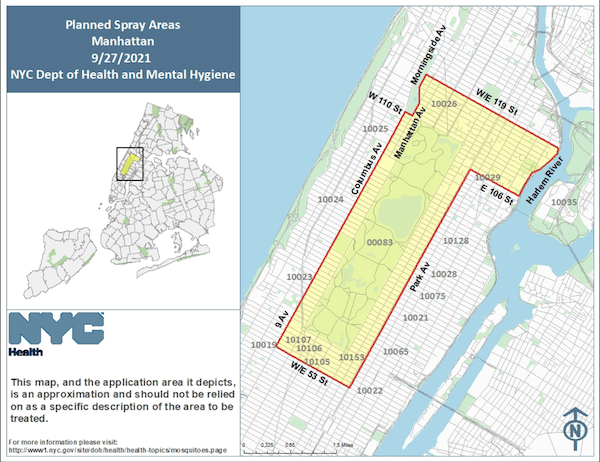 Courtesy of the DOHMH

Last year, there were seven cases of the West Nile virus detected in New York City, including one death, according to the Control Plan. Currently, there is no cure or vaccine for the virus.

We reached out to the Department of Health and Mental Hygiene for more information but have not heard back from them.

Claim Filed for Toddler Who Burned Feet at Safari Playground