The author’s father, Benjamin Pilcer, managed the ENDICOTT APTS, a residential hotel on 72nd Street, corner of Columbus Avenue, for over thirty years. This excerpt from Sonia Pilcer’s novel “The Last Hotel” reminds us that the Upper West Side was once a grittier, poorer place. 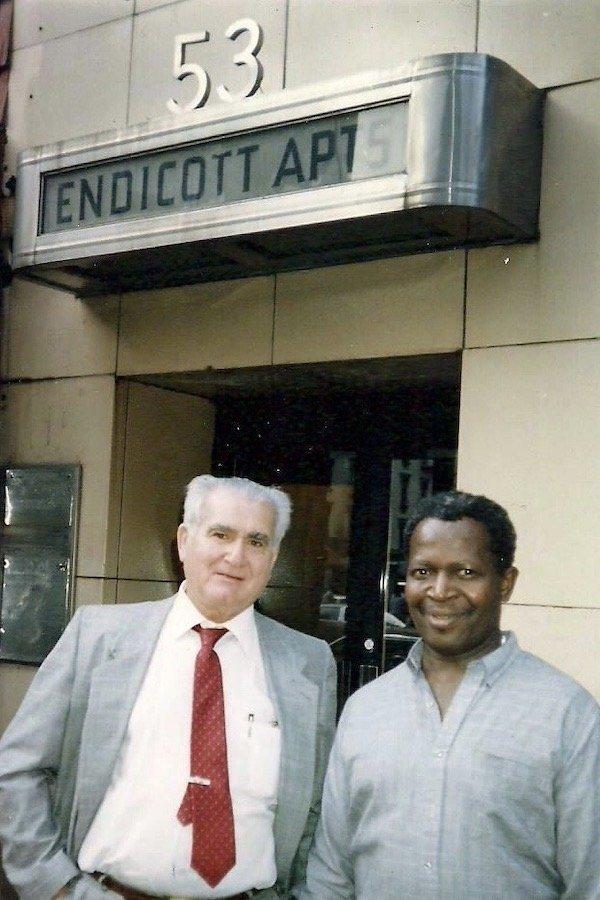 It was a place to escape from, not visit. Certainly not bring a car. Whole neighborhoods were abandoned.  A stroll through Central Park, especially after 5, you took your life in your hands. Riverside Park was positively murderous. Mostly, you had to have a strong stomach to live in the city.

Let’s call it the Last Hotel: a small residential hotel on the corner of 72nd and Columbus Avenue, when such places still existed. When hotels were, in fact, a respectable way of life. Clean and affordable. For single women, especially, who liked to have a concierge-type downstairs, without the sorority of the Barbizon Hotel, which forbade gentlemen visitors. Men liked it mainly for the longer term. Like renting an apartment, but they could pay weekly. No lease. No commitment.

Understand, residential hotels were not SROs, those scary, transient Single Room Occupancies that housed foul-scented dens of iniquity and worse. No, these hotels were faded movie queens who still possessed good bones and solid brass fixtures from the gilded splendor of a New York that was once piss elegant.

Inside, you could still see remnants of its glory days. An absurdly elegant lobby of marble walls with ornate moldings and sconces, white and black tiled floor, full-length smoked mirrors, and a glorious, non-working chandelier. A long turquoise vinyl couch, a mahogany coffee table, and a plastic rubber tree plant were chained to metal loops drilled into the floor.

Stories circulated about the hotel’s mythic speakeasy past of illegal booze, gambling, jazz, and rooms rented by the hour. There were nights when ghosts twirled past bewildered tenants. Sex juices rose in loud gurgles from the radiators! Many swore the vibrations of those licentious days still lived in the walls and inspired its current inhabitants.

A mere six floors, the Last Hotel was surrounded by tall, elegant hotels and doorman apartment buildings, limousines parked outside.

Women in minks walked snooty little dogs past heaps of garbage mounting each day as the Sanitation Workers’ strike continued. The Athena, a Greek diner, occupied a ground floor storefront, floating in a sea of black plastic bags. Scents from the kitchen wafted in the lobby. Sizzling garlic, onion, eggplant, feta cheese, and souvlaki.

The Dakota was at the end of the block at Central Park West. Celebrities lived in palatial twenty-room apartments in the Dakota. John Lennon and Yoko Ono occupied the penthouse. It was not uncommon to see them stroll into Central Park, arm in arm. Lauren Bacall shopped at the corner bodega, which sold fetish dolls, votive candles and love potions in the back. Nearby, an elderly man huddled inside a cardboard refrigerator box as a chill wind blew off the Hudson River.

The Last Hotel attracted the thrifty, the broke and broken, surviving spouses, divorcees and émigrés. It was a hotel of dreams and lusty dreamers. Most lived alone. Saul, the manager, insisted. “Too small for two people. You’ll kill each other.”

The place had a crummy charm — for those who disliked pretension and could handle funk. All the surfaces bore a coat of antique dust and the occasional cockroach. Yet the residents shared rent pride. The smug satisfaction of having found a bargain in the toughest city in the world. Lincoln Center, built a decade earlier, was six blocks south. The New Yorker and Thalia theaters were nearby, not to mention The Embassy, which was just down the street. You could see an Ingmar Bergman double feature anytime and alternate Szechuan Chinese and Cuban Chinese restaurants. And Gray’s Papaya, where you could get two hot dogs with mustard and sauerkraut, and papaya drink for 99 cents.

Living in the Last Hotel, one became part of random, raucous humanity, separated by cracked plaster walls. The lobby was the family room. The elevator offered daily rites of passage. The suites were paved with golden stories. Or rather, fragments of stories, curious particles of people’s private lives. What one could glean from a chance encounter in the lobby, a ride up or down the elevator, a trek to the laundry room in the basement. Puzzle pieces that glittered like Manhattan schist, enticing one to stay.

The Last Hotel, published by Heliotrope Books, is available at Amazon.com.

Sonia Pilcer, the author of six novels, lives on the Upper West Side. She wrote the screenplay of her novel Teen Angel with Garry Marshall and sold it to Universal Studios. Her theatrical adaptation of I-LAND: Manhattan Monologues ran for 6 years at the Thirteenth Street Rep Theater. Learn more about the author at soniapilcer.com.

A Love Letter to Levain on 74th and Its Cookies

Sonia Pilcer, the author of six novels, lives on the Upper West Side. She wrote the screenplay of her novel Teen Angel with Garry Marshall and sold it to Universal Studios. Her theatrical adaptation of I-LAND: Manhattan Monologues ran for 6 years at the Thirteenth Street Rep Theater. Learn more about the author at soniapilcer.com.