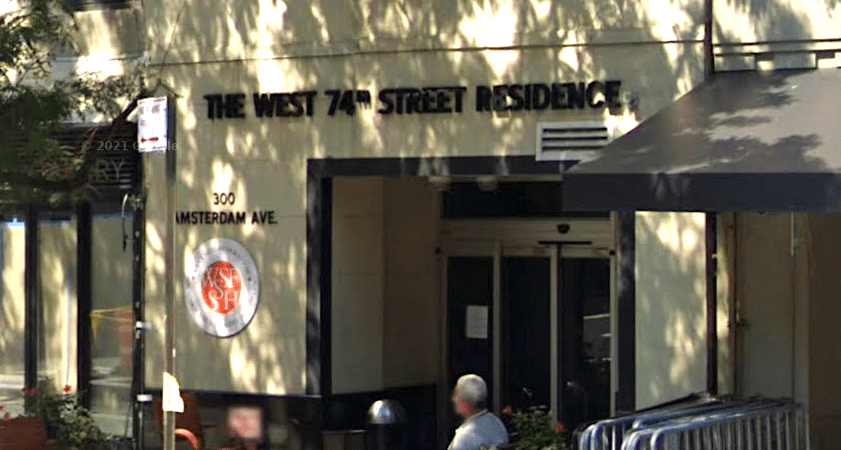 The West Side Federation for Senior and Supportive Housing (WSFSSH) has announced that its West 74th Street Residence (300 Amsterdam Ave) — which serves middle-and low-income seniors, including previously homeless individuals — will be undergoing an extensive renovation and remodeling.

A representative tells ILTUWS they expect the work to begin in 2023, and that the project is slated to take three years. However, their first priority is relocating the building’s current residents.

During the revitalization process, many residents will likely be relocated to other WSFSSH residences. “Those who either do not meet thresholds for those residences or choose not to relocate to the ones available to them will work with WSFSSH staff to find a suitable, safe and cost-effective alternative,” WSFSSH said in a statement. A list and map of the organization’s other buildings can be viewed here.

Current occupants who wish to move back to the West 74th Street Residence once it is remodeled will be given priority, however, they will need to “qualify given new funding streams.” When we asked a representative what percentage of current residents will be qualified to move back in, we were told that they don’t yet know, as they are “examining other financial models which will determine individual eligibility.”

In terms of the work, “The facility’s bedrooms, bathrooms and hallways must be expanded to meet current accessibility guidelines and for the comfort of its residents,” the organization announced. Initially opened in 1985, it is also in need of significant upgrades to its mechanical systems. There won’t be any work on the Upper West Side building’s exterior, we are told.

The renovation and future operations will be supported by a mix of public and private funding sources which WSFSSH uses for its other senior residences. Major funders, according to WSFSSH, include The Durst Organization, NYS Homeless Housing and Assistance Corporation, NYC Department of Housing Preservation and Development.

Here’s a quote from Paul Freitag, Executive Director of the WSFSSH:

“It is our obligation as a society to care for the aging; the staff at West 74th Street has done truly exceptional work under the circumstances, not only keeping our residents safe and healthy during the COVID crisis, but nurturing them socially and emotionally as well. But today, we face a two-fold reality: the physical facility is outdated and not providing a modern living experience for its residents, while at the same time becoming increasingly expensive to operate under existing programs. We are proud of this solution, which will ultimately provide a better living experience at West 74th Street while converting the facility to a more financially sustainable model that we have seen work in our other residences.”

Live in this Historic Brownstone with Famous Former Owners