Home
Community
What Do You Do When You Lost the Best Part of Every Day? 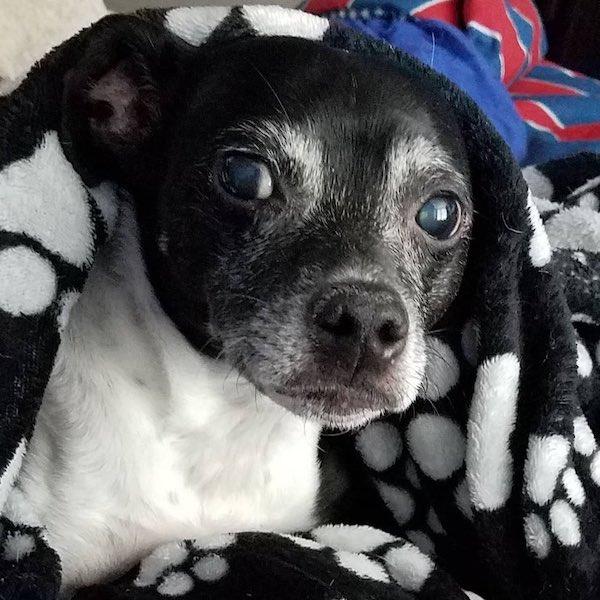 I lost my best friend. He was a little black and white Rat Terrier that I fell in love with over 16 years ago when I didn’t even want a dog. I always told him that I never expected to like him, let alone love him, reminding him every day that he stole my heart the very first night we brought him home.

A few weeks ago, I pitched an idea to my editor. How about all of us who contribute to the site write about our favorite things in the neighborhood? I was not sure what mine would be and ran the idea through my mind several times but kept coming up empty. But now I know. It was him. And I can’t imagine living on this side of the city without him.

Let me tell you about how perfect he was. His name was Esme “E” Dracula. We usually called him E, Dracula, or any number of pet names that must’ve grown into the hundreds as the years went on. He was the sweetest, most stubborn, funny, and loving little guy whose days centered around his favorite things: food, sleep, treats, and us. And sometimes walks around his neighborhood, the Upper West Side.

He moved to this area of the city when he was seven. We lived on West 71st and Broadway in an apartment that was truly our own. He loved going out to people watch and especially loved the walking adventures he and I went on all over Central Park for hours, nearly every day for probably eight months or so. Work got busy so the daily hikes got scaled back. But he still loved going out every day exploring the sidewalk near the old Tasty Café, excited to find a bit of a forbidden treasure, hopeful that I would not see it first and take it away before he could get it in his mouth.

We moved near Waterline Square a couple years later and stayed there for five years. He watched the new construction go up all around us, including the Collegiate School at West 61st and Freedom Place and all the new buildings along West End Avenue. He spent most days in Riverside Park South, its dog park, and the park across from West End Towers on West 63rd.

He cried while we were waiting for our cab when we moved to Brooklyn, the only reason for the move being so that I could cut my hour and a half long commute in half and get home to him sooner.

He got sick when we were in Brooklyn. He got so sick that he could no longer stay home alone and had to go to doggie daycare for the first time in his life, an incredibly difficult thing to do for a little man who never wanted to associate with other dogs or anyone else but us. An incredibly difficult thing for a little guy who was used to being independent and didn’t like strangers touching him.

We moved back to the Upper West Side for him after a little over a year. His daycare was two blocks away and his vet – his wonderful, amazing vet that we owe so much of our time with him to – was even closer. He loved being back home. When he left the neighborhood, it was a construction zone. And then it was finished when he came back in February 2020 and he could not have been happier.

He was back where he belonged, and he knew it. He loved his old hangouts and parks, but he really enjoyed the new park at Waterline Square. He chose the path of our walks and almost every time, we ended up there.

But the walks were getting to be more of a challenge for him in the last year or so. He was getting older and walking for hours like he used to was hard for him. His little legs, stiff from arthritis on the back right, made it difficult for him. But he tried.

He was getting older. Nora Ephron, writing about life in her sixties, said that death felt like a sniper. She discussed losing her best friend and compared it to losing a phantom limb. This excruciating loss feels like that.

We knew reality would catch up with us, but we didn’t feel like it would just strike us out of nowhere. You can’t live a dream forever and we’re lucky enough to have lived one for over 16 years. But now he is gone and we are lost. Everywhere we look in this house, it’s him. His pictures are everywhere. His food. His treats. His blankets. This whole house is him.

We look outside and see the streets he loved to walk. We see the park behind his house along Freedom Place. We see the slight hill he used to tackle just outside that park on West 62nd heading towards the water. All of it an unbearably painful reminder of the love ripped from our lives.

And the two of us left behind just sit here for the last 24 or so hours, staring blankly mostly. The dull drone of the TV broken by memories of how incredible he was, how good we had it, how lucky we were to hit the puppy jackpot. We can’t keep our eyes dry, especially when we question what else we could have done to make his life better … or easier.

Right before he turned five years old, he had cancer. He had surgery to remove it and, sadly, he spent his big fifth birthday feeling very sick. But he bounced back, enjoyed a brand-new cake about a week later and stayed cancer free for almost ten years. In between, he had a really tough surgery to remove kidney stones before his big second and terrifying cancer removal surgery. As usual, he persevered and was brave in a way that I can’t even fathom.

But this last week was just awful. It was too much for him. But like E always did, he fought. He tried so hard to feel better, but life is so cruel sometimes. A sniper.

His parks, his pet store, his favorite routes. That time on Broadway and 71st when a total stranger walked by and told him that he was “the coolest dog ever.” That time he climbed up the makeshift stairs for a floral display outside the deli on 64th and West End. Patiently waiting outside Magnolia. Going up to Shake Shack to get him a Pooch-ini or letting him pick out what he wanted at the now-closed Unleashed by Petco on Columbus and 68th. All those times we walked around the Christmas Tree shop on 60th and West End, scoping out the perfect tree for him and enjoying the holiday atmosphere. All the times we simply went outside and just enjoyed being together in our beloved neighborhood.

I am the dog mom in those memes that had dog birthday parties, the same dog mom who stayed in to spend as much time with him as I could instead of literally almost any other activity if he could not join me.

So now what? What do you do when you lose your shadow, your best friend, the best thing about every day? I’m seriously asking.