Home
Community
Where To Play Chess On The Upper West Side

Today when you think of chess in New York, you think of all the downtown spots- Washington Square Park, the Marshall Chess Club, The Chess Forum, Union Square Park, etc. Perhaps you saw Searching for Bobby Fischer and became acquainted with the famous chess hustlers, Joshua Waitzkin and the acclaimed chess teacher Bruce Pandolfini. What you likely didn’t know that there was once a booming chess scene on the Upper West Side, and there are still some places where you can play chess on the Upper West Side!

A former Upper West Side resident Jeff Kastner, who moved to the warmth in Phoenix, Arizona, said “in the 70’s I lived on 70th and Broadway, and so I was one of the regular denizens of the Chess House, which, the owner Charlie Hidalgo, eventually renamed House of Games I also regularly frequented The Game Room on 74th and Broadway.”

Growing up as a chess player on the Upper West Side, I was able to play some scholastic tournaments at several locations in the area at PS.9, Brandeis High School and the Trinity School; however, the area lacks any clubs or tournaments for adults in the area like their used to be.

That said, there are two good spots to play chess on the Upper West Side (and another which isn’t too far!).

If the weather is nice, you could take a walk into the park and visit the Chess and Checker House mid-way through the park on 64th street near the Carousel. People play casual games there daily from 10:00 PM to 5:00 PM. Occasionally over the summer, there will be lectures from titled players.

There are a few chess tables located at 95th street and Riverside Drive. There aren’t any regulars here like many of the parks so you need to make plans with friends and bring you own equipment but it is a nice, quiet place to play. 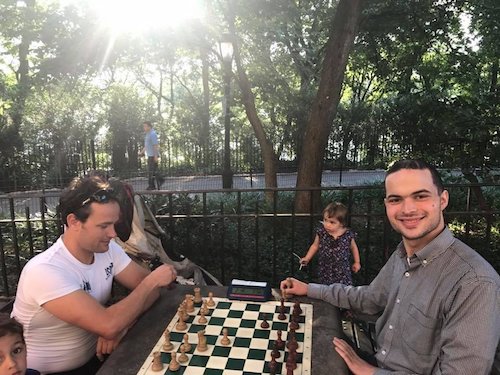 via Premier Chess on Yelp

If you are willing to trek outside the confines of the Upper West Side, you can head into Harlem to play the world-famous St. Nicholas Chess and Backgammon club, located at St. Nicholas on Edgecombe Avenue & 139th Street. They offer casual plays, tournaments, exhibitions and more. 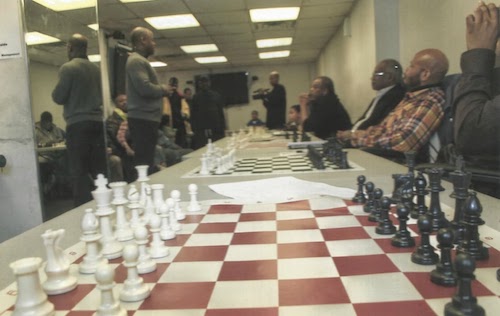 Hopefully one day someone will open up a brick and mortar chess club and run some tournaments for adults on the Upper West Side. Meanwhile, you do not need to necessarily trek downtown to get in a good game. These are just sites where chess tables exist; if you have a nice tournament-style roll-up board and set which you could get on websites like this one, there are many nice places to play, including the 79 Street Boat Basin and the Pier 1 café.