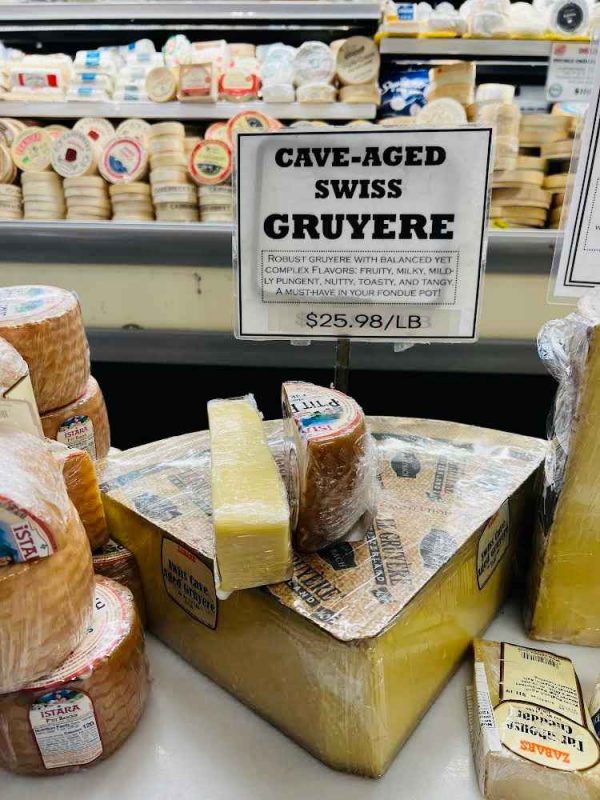 Before you head to Zabar’s brandishing your fondue forks, outraged by what you may have heard about the store supposedly misrepresenting its Gruyère cheese, you should hear Zabar’s side of the story.

An article in the January 12 New York Times says that Zabar’s received a letter in 2017 from a law firm representing a consortium of Gruyère producers in Switzerland, complaining that the food emporium was palming off German cheese as authentic Gruyère.

The consortium has been raising a stink about U.S. regulations governing cheese labeling. Under European guidelines, Gruyère is a trademark that can be used only for certain mild, nutty cheeses made in the region around Gruyères, Switzerland (and in France, though the French can’t claim the exclusive “Protected Designation of Origin,” or AOP, for their products).

But last month, a U.S. district court said that American purveyors can officially sell cheeses that are called “gruyère,” regardless of whether they’re made in the Netherlands, Wisconsin or anywhere else, because the term has become generic after decades of their doing so.

But Zabar’s has no intention of ever doing that, says Olga Dominguez, Zabar’s cheesemonger. The store, famous in part for its cheese counter and expert salespeople, sells only Gruyère from Switzerland. Yes, they marketed a German version once, and it was an “honest mistake,” she states. “We were offered the cheese. It was clearly not Swiss Gruyère — the wheel was the wrong size. But the label said German Gruyère, and when the sign for the cheese was made, the label and the ingredients were copied.” Once this was brought to their attention, the sign was changed immediately to say “Alpine-style cheese.”

READ MORE: (UPDATED): Something Fishy’s Going on at Fairway

The consortium says it will appeal the ruling, and Ms. Dominguez is pleased to know that. “The groups that are policing these kinds of things have every right to protect these cheeses.”

The court ruling is unfortunate, she says, for many reasons. It will confuse customers who are learning about cheese, for one. Plus, she said, “the price of Gruyère is what it is because of the way it’s made and aged and the fact that it’s imported. … These cheese producers have been making Gruyère for centuries—the terroir, the cows, everything about it make it special.” Gruyère can sell for more than $20 per pound, and it isn’t fair, she says, for these products to share the shelf with “gruyères” that can be sold for half that price, even though they might be very good. “It’s apples and oranges.”

A “Beauty and the Beast”-Themed Cocktail Experience