As the city government continues to solidify the future of New York’s Open Restaurants program, these quirky, enclosed street setups might soon see permanent changes and be a memory of the past. 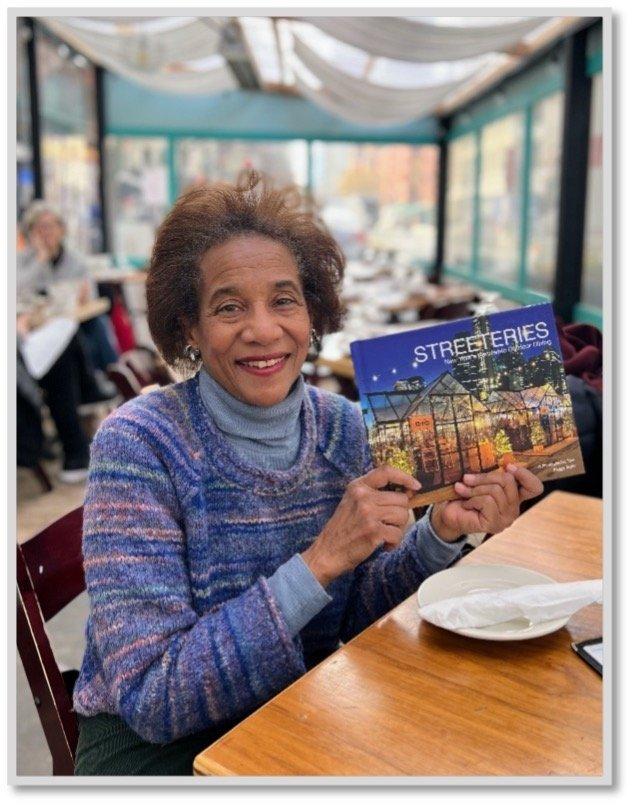 Streeteries isn’t a book about food, but about the innovation, ingenuity, courage and creativity that restaurateurs deployed to lift the spirits of New Yorkers during a time of intense anxiety.

Before March 2020, Peggy worked as a tour guide sharing the history, culture and stories of Harlem — until the pandemic brought her 39-year career to a halt.

While dejected and anxious over uncertainty, she fought her fear of the pandemic with grit and conviction — creating a pictorial love letter to the city.

“Peggy pioneered a journey when everything was uncertain, we didn’t have the vaccines or clarity on the future. She was brave and went out of her way to capture our story that helped save our outdoor space,” said Harvest Kitchen manager Igor Segota, as he welcomed me for my interview with Peggy. 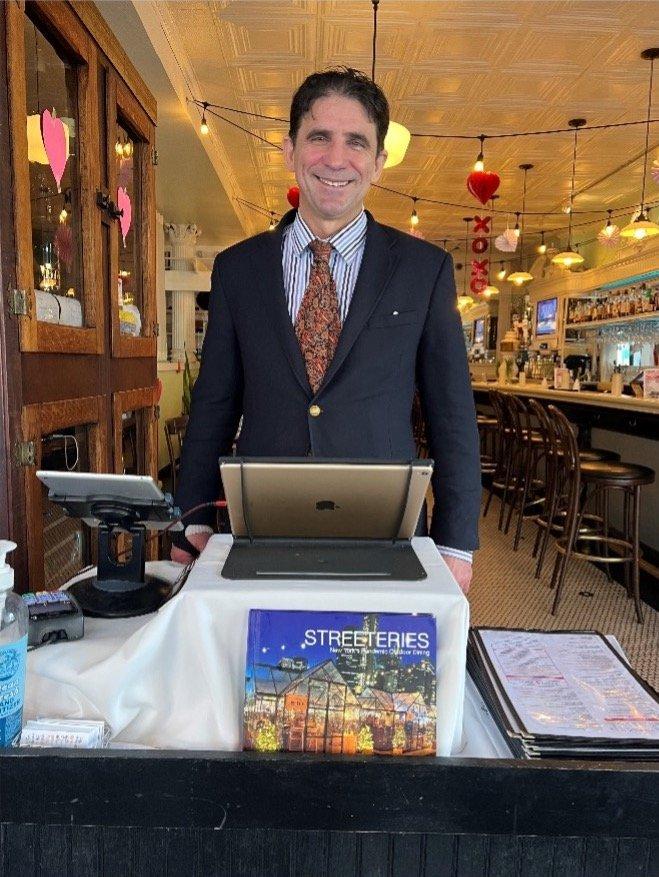 Here’s an edited and condensed version of our interview, conducted over guacamole and chips:

Prerana Tirodkar (PT): You started documenting your journey at the height of a pandemic when crime rates were beginning to spike. Weren’t you scared?

Peggy Taylor (PG): When the city and its tourism industry shut down, I was immediately put out of work. The senior citizen center where I usually had my sit-down meals became “grab and go.” Soon after, my neighborhood became the center of a bitter controversy when homeless men were installed in tourist-forsaken hotels to prevent the spread of COVID in City shelters. I was depressed and lost over 10 pounds during that period.

Around the time, Spectrum News NY 1 was covering the Open Restaurants program, and I was delighted to see New York becoming a kind of Paris-on-the-Hudson. It was then that I decided to venture out of my ‘hood and see what was going on in the rest of the city.

Initially, I feared taking public transportation as random criminal attacks spiked, but as I overcame my fear, I started taking the buses that were almost empty in the early days. I rode across various boroughs of the city going to neighborhoods where I hadn’t ventured before — Inwood in Manhattan and Flushing in Queens.

I photographed on chilly winter evenings, sunny summer afternoons, even during the autumn rains, because I wanted to capture these Streeteries in different seasons and climates.

PT: How did you plan your journey?

PG: I was vigilant and forced myself to not be on my iPhone on the bus or subway. This allowed me to keep my eyes open and look around as I traveled, spotting the dizzying, whimsical display of huts, pods, cabins, bubbles popping up around the city.

Even during a pandemic, the streets were surprisingly vibrant, as New Yorkers came together to support each other. Businesses which closed earlier than the restaurants allowed them to set up tables and chairs in front of their storefronts. This led to cafes wrapping around corners and stretching further into side streets than ever before.

Some Streeteries were elegant and featured the iconic Maison Gatti rattan chairs that Parisian sidewalk cafes are famous for; others, however, were tacky and uninviting with rusty, metal chairs you wouldn’t want to sit in. Flowers arching across café entrances, faux wisteria, faux Swiss chalets and cafes hung with chandeliers made for incredible dining experiences.

Early on during the pandemic, we had a shortage of toilet paper, but with the rise of “steeteries,” we’d soon have a shortage of faux wisteria, as restaurateurs vied with each other to make their setups more appealing and went out of their way to make diners feel special.

One restaurant transformed its streeteries into Christmas, Easter, and Spring cottages; another draped its gray police barricades with shiny, gold fabric; another created chimney floral smoke. Some had live music as they let laid-off musicians play for their customers. I had a ball discovering these.

As the days got shorter and weather and guidelines changed, the streeteries changed with them. Restaurateurs installed lamps and heaters of all shapes and sizes to keep diners warm.

PT: Did you eat at the cafes you visited?

PG: Food in New York City can be very expensive, and I wasn’t inclined to order a $15 appetizer and $35 entree everywhere I went. So, I visited these restaurants mainly during off hours and only ordered dessert and coffee, making an occasional exception for a warm shrimp salad with champagne dressing.

PT: Did you have any experiences that you didn’t anticipate?

PG: Nice Matin, on the ground floor of the hotel-turned-homeless shelter, had been my favorite spot for an occasional non “grab and go” lunch. I didn’t expect the bistro to survive given the controversy, but with loyal diners and shelter security guards to help ensure safety, it did. 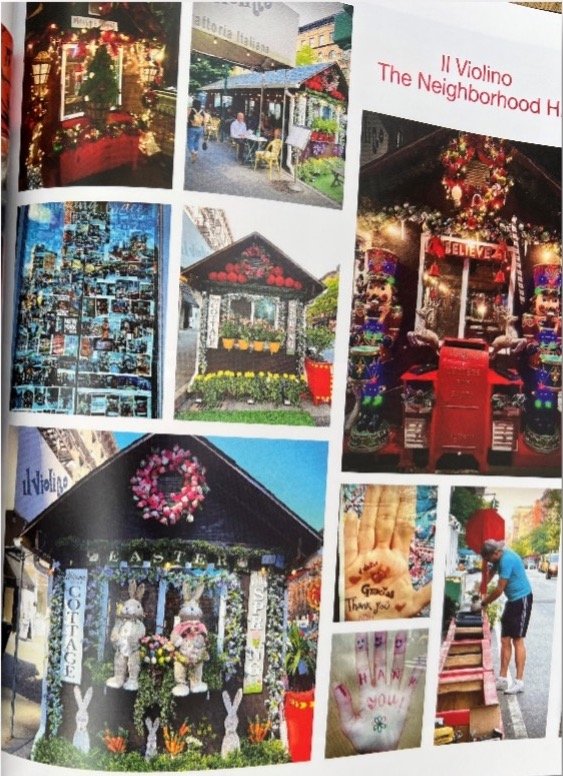 PT: Are there neighborhoods that over time became your favorites?


PG: I truly enjoyed walking along Madison Avenue on the East Side and Columbus and Amsterdam Avenues on the West Side, which were full of creative streeteries.

While critics complained about the noise and nuisances caused by the streeteries in some neighborhoods, most New Yorkers loved them.

PT: During your expedition, were there any running comments about these Streeteries that stuck with you?

PG: During a visit to Cafe du Soleil’s famous bubbles, the manager told me of a diner who almost broke down in tears when he couldn’t guarantee her a table in one of the bubbles.  At Nice Matin, a diner gushed over how European the New York streeteries felt; others wondered why we hadn’t dined this way before.

PT: Why do you think it’s important to capture and tell these stories about moments in history like this one?

PG: New Yorkers were dining in ways and places we had never dined before. Like Mayor Bill de Blasio, who quoted Winston Churchill’s maxim, “Never let a good crisis go to waste,” I wanted to capture the spirit of our city—the resilience, culture, creativity and ingenuity that New Yorkers demonstrated in such troublesome times. I wanted to particularly express my gratitude to the restaurateurs and their relentless efforts in creating these enjoyable experiences that gave us hope and something to hold onto.

It felt important to tell and capture these stories in a manner that we could treasure and pass on in post-pandemic times, times that remind us of those anxious years when we became Paris-on-the Hudson.

PT: Have you always been a photographer?

PG: Not always. Photography has become my late-life hobby, one that keeps me active and sharp; one that gets me out of bed in the morning, even when it’s cold, rainy, or snowy, if I think I can get a good shot.

PT: Why do you think outdoor dining is important to the city?

PG: Outdoor dining makes the city livelier, more vibrant, and safer. It gives restaurants additional revenues and attracts tourists. Who doesn’t like dining in the open air and people watching?

PT: So, what’s the next adventure you plan on taking?

PT: I plan on spending more time writing and pursuing photography. I hope to go back to being a tour guide once things get back to normal, but until then, I’m going to advocate for the restaurants and do whatever I can to make sure that the City makes outdoor dining permanent.

LOOK INSIDE: The Newly Opened Harry’s Table by Cipriani