Home
Arts & Entertainment
A “Billions” Tour of the Upper West Side

My name is Bahar Leventoglu. I am an immigrant. I moved to the US for my graduate study in the late 1990s. My husband and I, having finished our PhDs, moved to New York in 2001, only weeks before September 11, for jobs. The city has since given me so much and defined me as an individual: a foodie, a film buff, a theatre lover, a feminist, a wine snob, a runner and much more. Even though we moved to the south five years later for new jobs, we could not give up on New York. We still have an apartment on the Upper West Side and enjoy the city as part-time New Yorkers.

I am also a blogger managing a fan blog and a fan site dedicated to my favorite actor, Damian Lewis. And Billions is my dream show, not only because my favorite actor is in it, but also because New York – from its landmark buildings to its parks, Michelin-starred restaurants and yummy hole-in-the walls – appears as a cast member in the show! As someone who feels home only in The City That Never Sleeps, I particularly love that Billions is taking over New York, the big film studio that it is, and filming all over the place: from Manhattan to Queens to Brooklyn to The Bronx to Long Island and to the northern suburbs.


As a Billions and NYC enthusiast, I’ve posted location and dining guides for every Billions season. And when E.L. Danvers recently reported that Billions would be returning to our neighborhood, I thought it would be fun to put together “A Billions Tour of the Upper West Side” as a loving tribute to my neighborhood.

Now, for the Billions fans among you: I’ve listed the UWS filming locations in chronological order, and to refresh your memories, I briefly discuss each scene filmed at these locations. And if you haven’t seen the show yet, it’s time to catch up; Billions is hands down the smartest show on TV at the moment. And Brian Koppelman – a co-creator and show runner of Billions – is a long-time UWS resident!

Henry Hudson Parkway. Once he leaves the deal with Chuck behind, Axe drives his Bentley like crazy down the Henry Hudson Parkway towards his home in Connecticut. We see that the next exit in the scene is the West 79th Street Boat Basin;hey, Axe, if you take that and drive a couple blocks south, I am there!

194 Riverside Drive. Chuck pays a visit to the assistant US attorney, Lonnie Watley, at his apartment on the UWS. According to the New York Times, this building has appeared many times in TV shows and films over the last two decades. Peter Ferrera, the president of the co-op says “We’re not raking in billions. But if your heating bill is $140,000, you can defray some of that.” I’m wondering why my co-op hasn’t gotten into this business yet!

SEINFELD LOCATIONS ON THE UPPER WEST SIDE

Season 3, Episode 3: A Generation Too Late

Viand Café, 2130 Broadway. I suspect Ira Shirmer lives on the UWS and Viand Cafe is his neighborhood diner. Ira meets Bryan here to grab a coffee and discuss how to get Bobby Axelrod convicted in the Ice Juice case.

Gray’s Papaya, 2090 Broadway. Axe is ready to offer Ira his life back should Ira keep quiet about his role in the Ice Juice case. He starts the seduction in the line for a “recession special” at Gray’s; all recessions come to an end and Ira’s can, too, very soon.

I was very lucky to be on set while they were shooting this fun scene at Gray’s Papaya. You can go behind the scenes with me here! 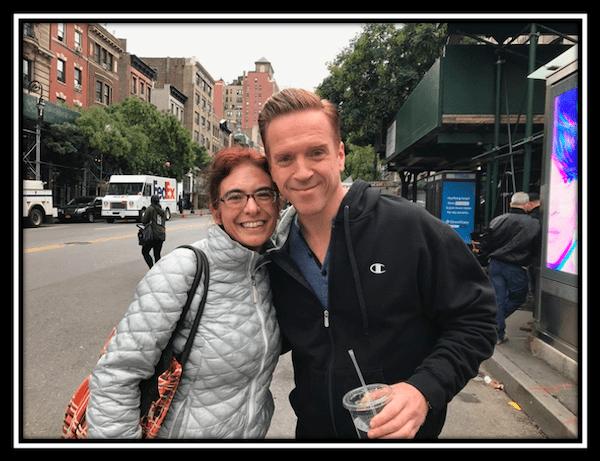 Welcome to the UWS, Bobby!

Morningside Castle, 100 Claremont Avenue. This is a unique venue with old world charm and is a popular place for weddings. It’s part of the Union Theological Seminary, an independent, non-denominational Christian seminary affiliated with Columbia University.

In Billions, Morningside Castle stands in for Yale University where the class of 1968 is having its 50th reunion and presenting Chuck Senior a life achievement award. Chuck takes the stand to make a speech celebrating his dad’s life and accomplishments, yet his sentimental approach to steal Senior’s heart again does not work!

A “BILLIONS” TOUR OF THE UPPER EAST SIDE

Bethesda Terrace and the Fountain, Central Park. Bethesda Fountain, the gorgeous focal point of Bethesda Terrace, is one of the largest fountains in New York. The statue at the center, Angel of the Waters, was the only sculpture to have been commissioned as part of Central Park’s original design. And Emma Stebbins, who designed the statue in 1868, became the first woman to receive a commission for a major work of art in the city of New York. Chuck chooses to meet Dr. Gilbert in the middle of the night at Bethesda Terrace. 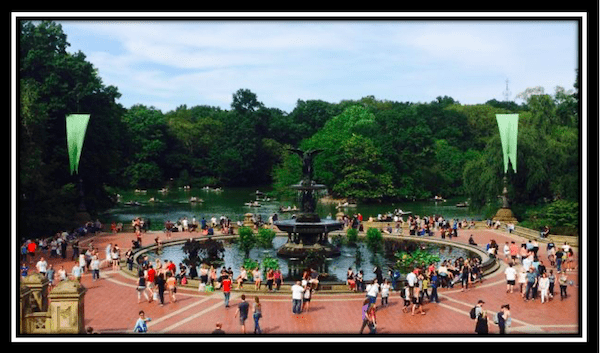 Kefi, 222 West 79th Street (scene shot at the former location at 505 Columbus Avenue). Chuck and Wendy are having a double date with Lonnie Watley and his pianist wife Sandra at Kefi, one of our neighborhood’s gems serving home-style Greek food. The pandemic hit after they moved back to their original location at 222 West 79th Street and the restaurant is still closed. I am hoping to celebrate their reopening with a bottle of Greek wine!

I’m ride or die with Barney Greengrass. Been going there since my dad first took me as a 9 year old. https://t.co/307kbXOtl5

Owner Gary Greengrass makes a cameo in the episode asking Chuck if he wants a table and hears back that he should “save his fine sable for someone whose fortunes warrant it.”

In the most Shakespearian Billions scene ever, Chuck “Mark Antony” Rhoades is at Black Jack Foley’s funeral to make his own “Friends, Romans, and Countrymen” speech, calling out the criminals and conspirators that have infested New York politics for decades. Hats off to Chuck – I cannot think of a more proper send off for Foley.

RECENTLY FILMED IN THE NEIGHBORHOOD

She Wolf Bakery. Well, this is not a filming location. This is just a tip that you can buy Wendy Rhoades’ favorite bread on the Upper West Side.

She Wolf Bakery started in the ovens of the hip Brooklyn restaurant Roman’s in 2009. They later expanded their bread production to a new space that became the bakery. She Wolf currently supplies the bread for all their restaurants as well as nine different NYC farmers markets – including our own 79th Street Greenmarket.

In Billions, Wendy comes home from running to find a yummy breakfast, courtesy of Chuck, waiting for her. And Chuck tells his wife that he also bought her favorite bread from She Wolf. I don’t know about Wendy’s favorite but mine is the Miche!

Lincoln Center. We see Mike Prince, who seems to be attending a black tie event, at the stairs in front of Lincoln Center, giving Axe a call (a quite insulting one) before going in.

RedFarm, 2170 Broadway. I cannot tell you how much I crave for Red Farm’s Pac-Man Dumplings as Ed Schoenfeld, the owner of the restaurant, serves them to DA Gramm for lunch.

The dumplings, which look like the ghosts in Pac-Man, are definitely a crowd-pleaser, putting a smile on everyone’s faces. I’ve seen many people order them after seeing them served at the next table! They are all shrimp dumplings but each has a different color thanks to its specific flavor: shrimp and bamboo shoots, shrimp and crab, shrimp and yellow leeks, and shrimp, pickled ginger and hot pepper.

Oh, and it’s not just me that loves RedFarm; it’s also Billions co-creator and show runner Brian Koppelman’s favorite neighborhood restaurant. He once tweeted that he wrote many Billions episodes “sitting alone in a booth with a big pot of tea and their three-chili chicken for hours.”

If you are going to get Chinese food tomorrow in NYC, let me recommend you order in @RedFarmNYC, if you can afford it. I miss this place so much. Have written many Billions episodes sitting alone in a booth with a big pot of tea and their three-chili chicken for hours.

To be continued … with the rest of Season 5! And just a little note from a super fan who deeply cares: you may or may not know that Damian Lewis lost his incredibly talented actress wife Helen McCrory only a month and a half ago. So if you happen to see him on the set or in the city, please be considerate.

In closing, please bear with me as I do some shameless self-promotion! If you are a Billions fan and would like to eat like Bobby Axelrod and Chuck Rhoades in the restaurants featured on the show, my book – Appetite for Power: Eating, Drinking and Dealmaking in NYC – A Billions Guide – will be out in September! You can preview and preorder it on Amazon.