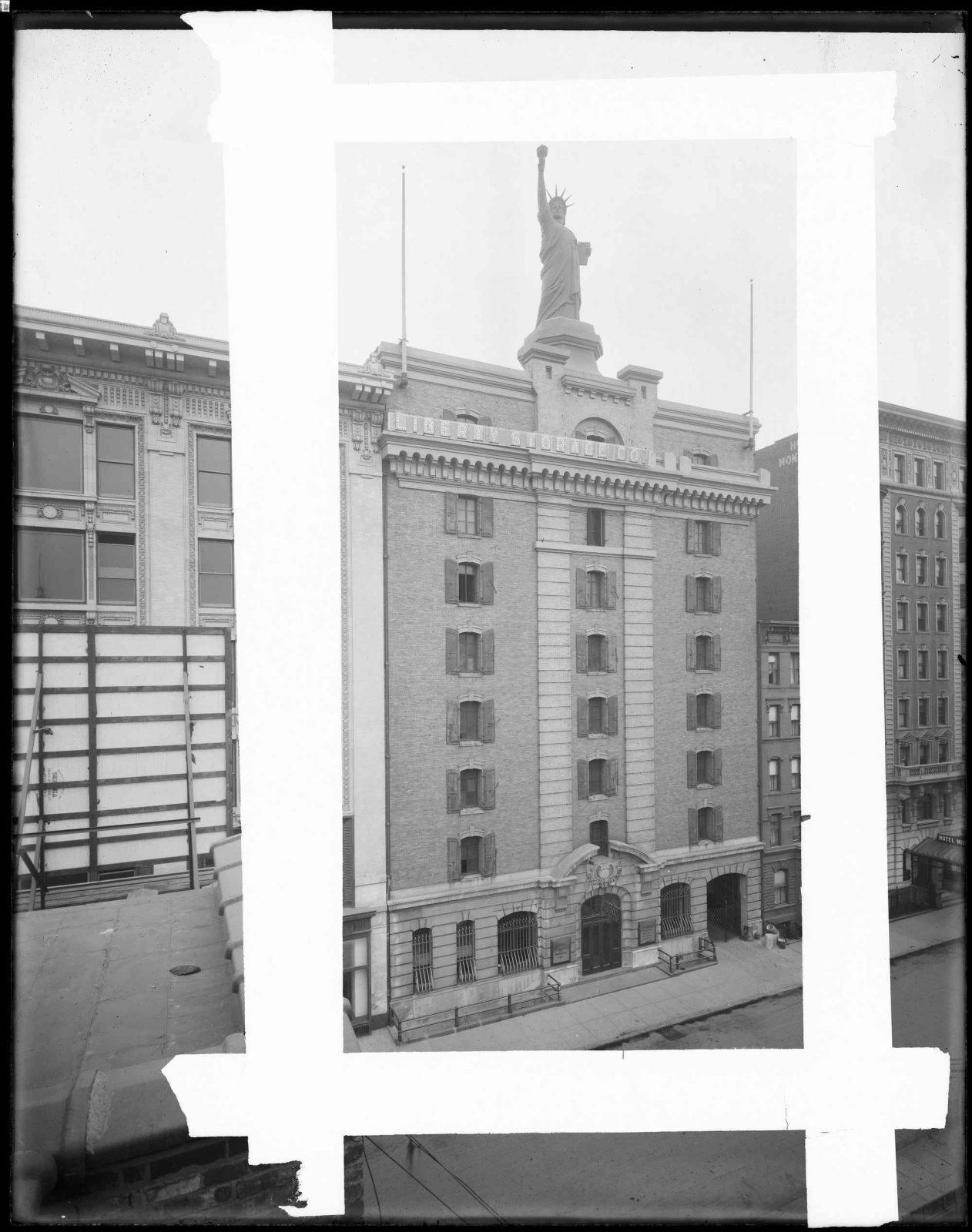 Little Liberty first was placed atop 43 West 64th Street in 1902, above an eight-story business named Liberty Warehouse. At the time Little Liberty was one of the tallest points on the Upper West Side. And that’s where she stood until her centennial year in 2002.

Little Liberty would confuse the heck out of tourists, The New York Times noted in a 1993 story. “It looks so much bigger in the pictures,” said June Castolli, who was visiting New York from Indiana. He thought he was viewing the original.

The developments that brought Little Liberty to the Upper West Side is a story of immigrant pride and clever marketing. In 1891, William H. Flatteau, a Russian born US immigrant from France, built an eight-story warehouse at 43 West 64th Street. Flatteau was a prospering businessman with great pride in his new land. Described as “Patriotic” by Khorsandi, Flatteau perched his Little Liberty atop his Liberty Warehouse in 1902.

Originally, Little Liberty held a torch that when lit could be seen from up to a mile away. There was also an internal staircase that led to a look out point in Little Liberty’s head with glass windows in her crown for sightseers to view Broadway down below. This feature was closed to the public in 1912, according to Landmark West. The torch eventually blew away in a storm, too.

Flatteau died in 1931, and with his passing a lot of Little Liberty’s history was lost. The artist and maker of Little Liberty are unknown but we do know it was cast in a foundry in Akron, Ohio. In a 1988 New York Times “letter to the editor,” Bobbie Kraus wrote that his grandfather helped anchor the replica atop the Upper West Side building. Kraus recalled it being shipped to Manhattan on a flatbed car and “since the statue was too large to fit through railroad tunnels, it was cut in half, lengthwise, and later welded back together.” Kraus also noted that his grandfather had serious concerns about such a heavy object staying grounded atop a tall building, but after “conferring with the engineering department at Columbia University, and numerous engineering firms, and with no definitive answers, he simply poured yards of concrete and prayed.”

The Weissberger Moving and Storage company took over the warehouse and had Little Liberty painted silver in 1960, Landmark West records show. In 1978, Love Realty took over the building and treated Little Liberty to a renovation that included “everything from a new paint job to a rewired torch, wrote the Times.

Things pick up for Little Liberty in 2002, when The Athena Group, then owners of the Liberty Warehouse, decided to convert the eight-story property into a 12-story apartment building — and donated Little Liberty to the Brooklyn Museum, where it can be found today.