A vine grows on Amsterdam Avenue – or so it will in about three to five years, architect Chad Smith says. He’s part of the team behind a newly-constructed communal entrance to eight buildings and a doughnut garden next to Fred’s Restaurant.


Earlier this week, site workers used a crane to install a giant, black, metal vine sculpture atop a glass-doored entryway next to what used to be the check-cashing place with the ramp. This ironwork-covered, central entrance will offer a new sense of community for the residents of all 71 units in the eight buildings connected at the corner of West 83rd Street and Amsterdam Avenue, according to Smith, the principal of Smith & Architects. 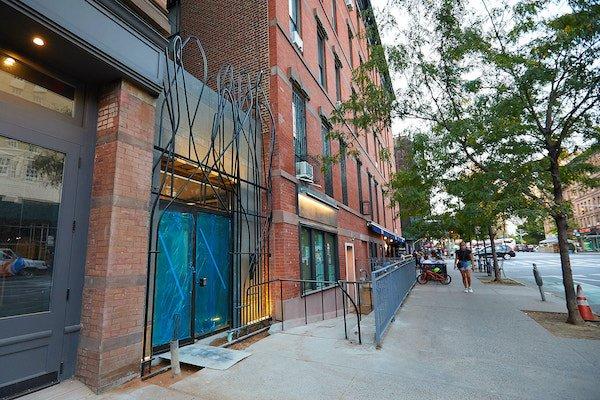 “All those residents don’t really have a lobby. It’s an amenity for all those buildings. We made it as see-through as possible with the vines that signals that something’s there,” Smith said. “Eventually, after several years, it will cascade out over the street, with flowers in the spring. The iron vines will get disguised by the green vines and will bring back wild nature and the wilderness to the Upper West Side.”

Soon, all those residents who are used to lonely walk-ups will have an ivy-covered, common entryway complete with an electronic locker room where they can say hello to neighbors and retrieve delivered packages. There will also be a communal garden. 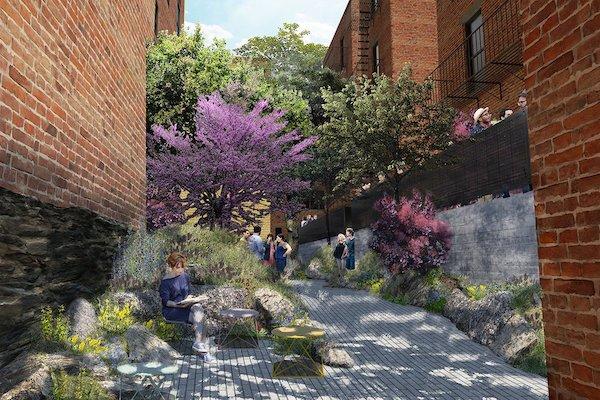 The sourced ivy, 5-Leaf Akebia or Chocolate Vine, with deep purple-ish brown flowers, does not like brick and will stay on the metal sculpture, Smith said. Typical ivy grows on buildings and can cause erosion, among other things.

Two years ago, the buildings’ owner, Aimco, wanted to find ways to offer amenities and to better utilize the under-used private garden spaces available to only a few residents within those eight buildings at 464 to 466 Amsterdam Avenue and 200 to 210 West 83rd Street. That led to working with Smith to come up with a walkway to Amsterdam Avenue from what is known as a doughnut garden, in which buildings surround a common area. Such gardens are common on the Upper West Side.

“We wanted to open up the opportunity to everybody in the community. This was before COVID, so we thought it would be a nice amenity,” said James Huang, Aimco’s vice-president of redevelopment. “We’re cognizant of our responsibility to the neighborhood, to the culture on the Upper West Side, and we will go to great lengths to be good partners and offer good design.”

To that end, the company reduced the size of the retail rental space where the check-cashing place was and is seeking a commercial tenant “with uses much more consistent with what people and residents expect,” Huang said.

In addition to the biophilic design, where concepts mimic nature and are good for a community’s health, Smith says, passers-by will also be able to look through the glass-door vestibule and see the garden. And of course, enjoy the impending lush ivy on the metal. “We took a lot of care to make the vines appear natural,” Smith said.

As the buildings, soon to be called Amsterdam Vale, sit in a historic district, agencies were involved. It went first through Community Board 7, and then the Landmarks Preservation Commission. Landmark West!, a community advocacy group which reviews restorations on the Upper West Side, also supported the design implementation of the metal-ivy communal entrance.

“So if you look at original photos of the Upper West Side, trees were missing – but life of the street was missing, and we felt the vines created certain activity and life on the street. Empty stores don’t offer that, and it occupies the space in a positive way,” said Sean Khorsandi, Landmark West!’s executive director. “We need to be supportive of architects who are tapping into the vein of creativity which generated these buildings that we love so much in the first place.”

Amsterdam Vale is expected to be completed by November.