Landmark West has launched a new pop-up exhibit which will be on display along Columbus Avenue between 67th and 82nd Streets until June 14. 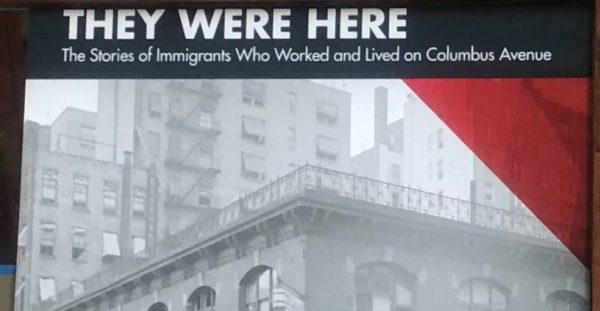 In the windows of select storefronts between these streets, you’ll see “They Were Here” banners which can be scanned to read all about the history of the people and architecture behind each building participating in the exhibit.

289 Columbus Avenue, currently home to Pioneer Supermarket. “From 1895 to 1925 this was the home of Barnett Brothers, a true department store that offered not only dry goods and apparel, but housewares, china and glass, and other items. In 1908 a burglary was foiled there. Ironically, the thieves were three brothers and it was not the brazen deeds of the trio that amazed detectives and the public, but their ages: ‘Red’ McGlynn was 10 years old, his brother George was 8, and William ‘Fatty’ McGlynn was 9.”


189 Columbus Avenue, currently home to Viva La Crepe. “This building was the scene of a crime spree in Summer 1899 when “valuable linens” repeatedly disappeared from the rooftop clothes lines. Things turned serious when Chief of the New York Police Detective Bureau George McClusky’s pajamas were stolen on July 18–the string of burglaries came to an abrupt stop after that!”

Learn more about the exhibit here.