On Sunday, September 13, Upper West Siders and others marched from The Lucerne Hotel to Gracie Mansion to protest Mayor de Blasio for his recent decision to relocate Lucerne Hotel residents to the Harmonia shelter on 31st Street. This has so far resulted in the displacement on 17 families, but according the The Legal Aid Society, the displacement has been put on a pause. The Legal Aid Society states that 80% of the Harmonia’s residents are disabled.

In response to the city’s decision to relocate these groups, The Legal Aid Society has made it clear that they are preparing a lawsuit. 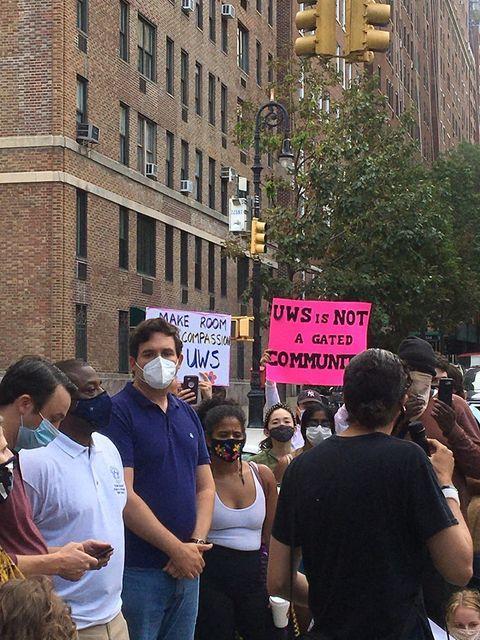 The Sunday protest lasted several hours and participants stated they would not leave until their demands were met, with some also calling for Mayor de Blasio’s resignation.

For 2 hours now @UWSOpenHearts and Michael, a Harmonia shelter resident, have been trying to deliver a letter to @NYCMayor outside Gracie Mansion. Andrew from the Mayor’s office receives a verbal message from Corinne of Open Hearts. pic.twitter.com/rRRxdOMOqt

At .@UWSOpenHearts rally at Gracie Mansion. Protestors will be delivering a Transfer Notice to @NYCMayor that he will need to relocate from GM to a shelter tonight. pic.twitter.com/DDFwPalxeO

Mayor’s head of community affairs agrees to meet with Harmonia and Lucerne residents before the @LegalAidNYC action is resolved!!!! @HelenRosenthal made this happen! pic.twitter.com/W3rWEILD7V

After Sunday’s rally, the following press release was published by UWS Open Hearts:

After the rally at 86th and East End, the group of shelter residents, supportive community members, activists, and elected officials marched directly to the entrance of Gracie Mansion to deliver their message to the Mayor. Councilmember Helen Rosenthal together with Harmonia and Lucerne residents, UWS Open Hearts Initiative, and Councilmember Ben Kallos demanded that Mayor de Blasio’s office hold meetings with residents and staff of Project Renewal at the Lucerne and residents and staff of The Harmonia before Legal Aid’s negotiations with DHS over transfers are resolved.

After waiting at Gracie Mansion for over THREE hours, Councilmember Rosenthal received commitment that Marco A. Carrión, commissioner of Community Affairs, would personally meet with residents and staff at both shelters before any more transfers take place, so the Mayor can hear directly from residents how traumatic, disruptive, and counter-productive these transfers will be.
After receiving this commitment, Harmonia shelter resident Mike Bonano personally delivered our “notice of transfer” to de Blasio’s staff. “We are asking for the Mayor to meet with the shelter homeless people who he is displacing, prior to making his final decision,” said City Councilmember Helen Rosenthal.
The ripple effect of his decision, prior to meeting with those who don’t know where they are sleeping tonight, is unconscionable. “What I want is safety and a roof over my head, and not to be pushed around from shelter to shelter. This is our third time being displaced, we’re tired of being treated like garbage,” said Mike Bonani, resident at Harmonia Shelter. “To the Mayor, my hope is that you read into what is being said today and begin to really think about the humanity of those you serve whether rich or poor,” said Da Homeless Hero, a resident at the Lucerne.

Attorney Randy Mastro, who represents the West Side Community Organization, put out the following statement:

Sheep Meadow: A Slice of the English Countryside in Central Park