Home
Community
A Protest & Press Conference Outside The Lucerne Hotel

Following the city’s decision to relocate the homeless residents of The Lucerne Hotel, a press conference was held outside the building, located at 201 West 79th Street, at 11am on Wednesday, September 9. Some who attended held picket signs to protest the city’s move.

Huge crowds of individuals and members of the press gathered outside the entrance on 79th between Broadway and Amsterdam. 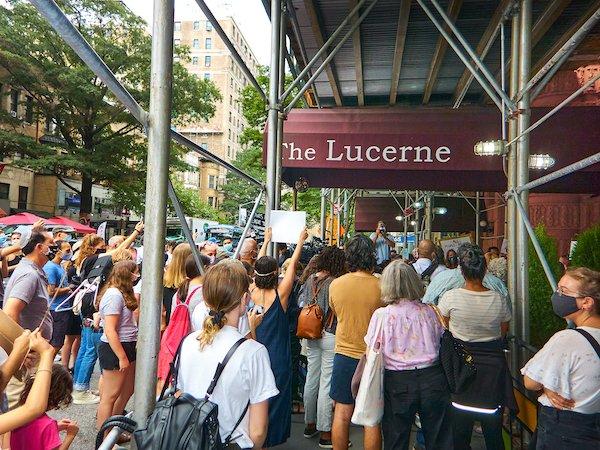 Council Member Helen Rosenthal was among those to address the crowd. 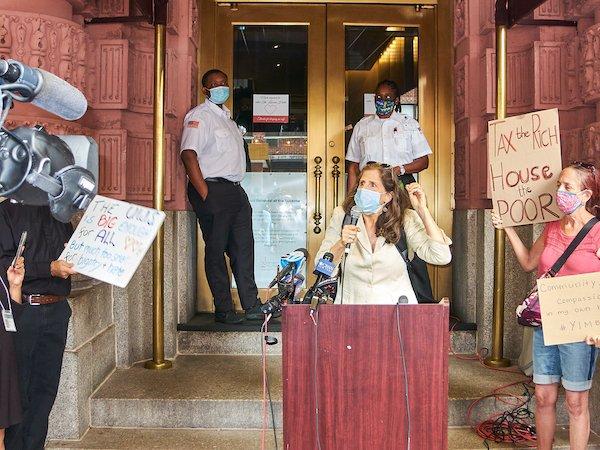 Rosenthal has been critical of the decision to relocate these individuals, earlier stating that “it’s a sad day when the threat of lawsuit gets city hall to reverse a decision. What message does this send that groups who can afford to hire high-powered lawyers (are) the ones who will get their way.”

Others in attendance included Public Advocate Jumaane Williams, Assembly Member Linda Rosenthal, and representatives from The Legal Aid Society and The Coalition for the Homeless.

As we mentioned in our original report, the reaction to the decision to relocate these homeless residents from The Lucerne Hotel to other shelters has been extremely mixed.

While some have claimed that Mayor de Blasio has given in to the pressures of the West Side Community Organization, he stated that conditions of the temporary shelter were not up to par. “I went and saw for myself on the Upper West Side last week and what I saw was not acceptable and had to be addressed,” the Mayor said. Officials have also discovered the deceased body of a 62 year old resident, however, his death was determined to be from natural causes, reports the NY Post.

Corrine Low, co-founder of UWS Open Hearts, which has been in support of the hotel shelter residents, issued the following statement:

“I am devastated to see the city government treat these shelter residents as chess pieces who can be moved around the board based on the whims of the rich and powerful. This was never an issue of the community versus the shelters, because we are the community, and we have mobilized a groundswell of support for shelter residents on the Upper West Side.

“We demand transparency into how this decision happened when the Mayor had reassured the community that he didn’t care who sues him, he was going to make this decision based on public health. The city owes that to the shelter residents and the large community here on the UWS that stands with them.”

We also received the following statement from Project Renewal’s press team (Project Renewal was in charge of overseeing the Lucerne Hotel shelter site):

“Last night we learned that our staff and clients are being moved from the Lucerne to another location. Through all of this, the health and well-being of our clients is, and has been, our number one priority. These men, many of whom have suffered trauma and been disadvantaged all their lives, deserve better. So do our 50 staff members who have worked around the clock to ensure clients had a smooth and successful transition. Finally, there have been numerous supporters and new friends we have made in the neighborhood. We are grateful to each of them, especially Council Member Helen Rosenthal, Borough President Gale Brewer, Assembly Member Linda Rosenthal, Mark Diller and CB7, and the many compassionate and caring residents who see our clients as humans deserving of our collective support.”

Megan Martin, President of the West Side Community Organization (the group which hired attorney Randy Mastro and petitioned the city to relocate the new homeless residents of the UWS), issued a diverging statement in support of the city’s decision:

“We, the members of the West Side Community Organization — or WestCo — applaud the city’s action. This was a win-win for all involved.  The goal of our organization was always to improve the conditions of not only our community, but the lack of resources these men were receiving.  We are grateful to the Department of Homeless Services and Mayor de Blasio for responding to our concerns, as we are grateful that these men will now be in a more appropriate environment. The Upper West Side still has more work to do, but this is a tremendous first step.”

And the man pictured below, holding a bag of trash while walking his dog, caused a rise from the crowd when he shouted “Clear the sidewalk! Spread out! You’re not social distancing!” We’re not sure, at this point, where he stands on the issue. 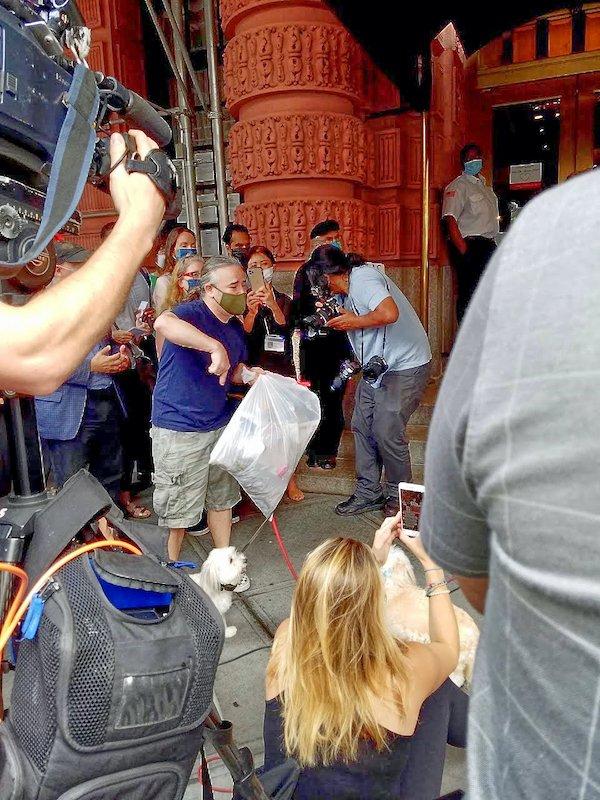 The event was also live-streamed by UWS Open Hearts – here’s their full video:

Special thanks to our photographer, Lee Uehara