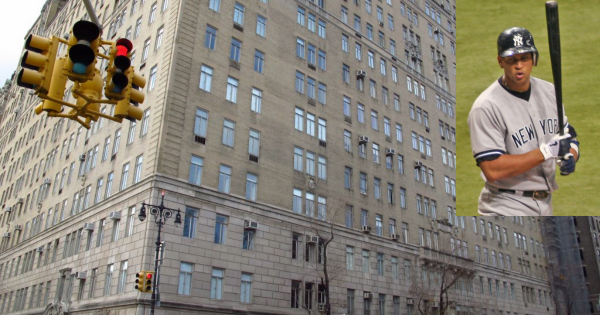 If it feels like there’s a bit less air in the neighborhood than usual, it might be because one of professional baseball’s most inflated egos is moving back to the Upper West Side.

Alex Rodriquez – a.k.a. A-Rod a.k.a. J-Lo’s ex – is moving to a Central Park West co-op. But that is not necessarily the big story. According to the New York Post, the former Yankees third baseman had to do a bit of “begging” to land his new $9.9 million digs at the Beresford, located at 211 Central Park West.

For anyone who’s followed his scandal-ridden career, humble is not a word that immediately comes to mind when describing Rodriguez. According to the Post, he balanced out his play at humility with a “tantrum” (though A-Rod’s rep claimed the process went “seamlessly” and denied any “back and forth.”)

“It is a typical white-glove Central Park West co-op,” a source told the Post. “They don’t want anyone with celebrity status living here. That is not what they are going for.” This sentiment aside, the Beresford has been called home by celebrities including Jerry Seinfeld, Meryl Streep, Calvin Klein and more. And now it will be home to one more.

A-Rod is a neighborhood veteran. Like a number of baseball legends before him, the man who was once (arguably) on track to be the best baseball player in history has spent a great deal of his time in Yankees’ pinstripes calling the Upper West Side home after he first moved to 15 Central Park West in 2008.

The former shortstop had a short stop over at the Rushmore at 80 Riverside Boulevard in 2011. He flipped his investment after 10 months and in 2013 moved to the Aldyn at 60 Riverside Boulevard. Despite a prior ban from moving back to 15 CPW, he and J-Lo kept a secret apartment there from 2017 to 2018.

Since his retirement in the middle of the 2016 season, A-Rod has managed to keep himself busy. He has been stationed in the broadcast booth and has worked as an analyst for FOX Sports and ESPN for several seasons now. Both gigs have drawn mixed reviews.

But fans and sports writers united recently in their criticism for A-Rod’s “uncanny ability to repeatedly say some of the weirdest things imaginable.” He left both groups confused and amused during the Yankees-Red Sox 2021 Wild Card Game with his head-scratching analogies and non-sensical analysis. Because of it, it was hard to imagine that ESPN was going to continue with A-Rod in the booth in 2022.

Yet, as the numbers show in Alex Rodriguez’s world, things always seem to balance out in his favor. Last week, rumors floated around the baseball world that ESPN was going to offer A-Rod his own broadcast. Instead, A-Rod accepted a multi-year contract extension and will be teaming up with Yankees play-by-play broadcaster Michael Kay for a Manningcast-like program called “Sunday Night Baseball with Kay-Rod.”

The NFL’s Manning brothers, as Yahoo! Sports reported, have created quite a buzz “just by sitting in their living rooms” and reacting to play on the field between themselves and other guests. The MLB will offer its own take on this new way to watch a professional sports game with A-Rod and Kay.

One fan summed up the pros and cons of this new program for us in one sentence: “At least it is only once a week and not every game.”

Major League Baseball is in the midst of a lockout so it is unclear if Kay-Rod will hit it out of the park or strike out in the upcoming season. If baseball is played in 2022, will Kay-Rod will be aired from the homes of either Kay or Rodriguez like their NFL prototype is? ESPN has not yet clarified that piece of the puzzle.

The Michael Kay Show can be heard weekdays from 3-7PM on ESPN 98.7. Located at 125 West End, the studio is a quick walk from A-Rod’s new home on West 81st Street.

Housing Lottery: 3 Bedroom for Under $2K at 72nd Street Development

West End Ave Townhouse Needs Love: Can it Morph from Beast to Beauty?