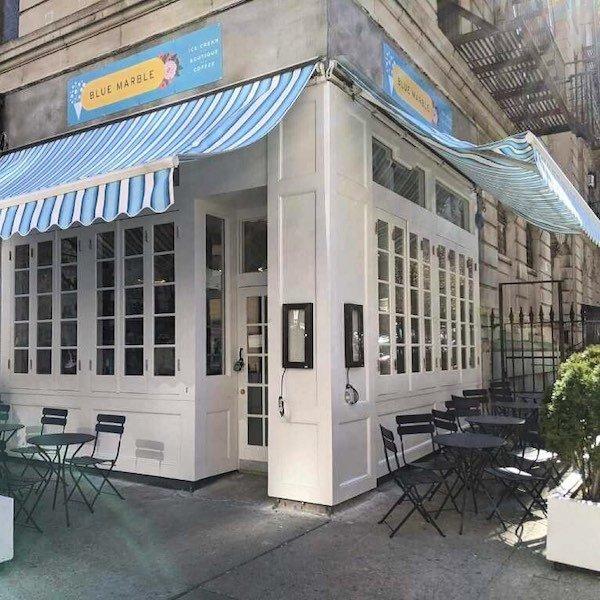 It was 3pm when I called Jennie Dundas. She had written on Nextdoor and her post caught my attention. Jennie is the owner of Blue Marble, an organic ice cream shop with a newish location on 97th and Broadway, and Nextdoor is a social app used to connect neighbors. We spoke on the phone while she was walking towards her store to close for the day. She stopped talking mid-sentence because a customer hoped to purchase an afternoon coffee. “Hold on one sec,” she told me. “I’m so sorry, we had to close early,” she informed the woman. “I apologize. We lost some staff because they’re too scared to work here. We’re working on finding new people. We had a bunch of crime recently so … I’m so sorry. Please come back tomorrow!”

On Monday, November 8 around 3:45pm, a man entered Blue Marble, walked to the counter and said, “I have a gun, give me cash.” There was only $20 in the register but he took it and left. Wednesday afternoon, at nearly the same time, he returned, this time stealing $12. Later that evening he was arrested. On Thursday night, a man riding a Citi Bike threw a Pepsi bottle at Blue Marble’s front door, nearly hitting a customer. On Friday, police informed Jennie that the man who had robbed and threatened the lives of her staff twice, had been released.

He was seen wandering the neighborhood, again riding a Citi Bike. On Saturday, there was an unrelated shoplifter, but on Monday, the man who had robbed the store was back. He entered the intimate, brightly lit ice cream shop while children were inside. Jennie ordered her staff to go to the back while she called 911. While they waited for the authorities, he stood lingering, appearing to contemplate something. Finally he left. On Tuesday there was more shoplifting and by Wednesday, two staff members had quit for fear of their lives. While I spoke with Jennie she was closing her store seven hours early.

We reached out to the NYPD and got a couple of reports.

“These are complex issues,” Jennie says. “I’m not a naive person. And I’m not a myopic person. I do appreciate there are a lot of points of view here… I can’t imagine what a person’s state of mind would have to be that they would risk going to prison in order to just grab 40 dollars. To me, this is not an us vs. them thing.”

Jennie Dundas is from Boston, a city renowned for its ice cream adoration. She was a child film actress who became an adult Broadway star and never outgrew her love for ice cream. Today, she occasionally appears on screen. but her focus is steadily aimed at sustainable, organic, good-for-people-and-the-planet ice cream.

In 2010 she was at Sundance Institute and met Kiki Katese, a Rwandan playwright, actor, director and founder of The Woman Cultural Centre. Jennie had already launched Blue Marble and Ms. Katese proposed creating an ice cream shop in Rwanda. At the time, it had been 17 years since the Rwandan genocide. PTSD and depression rates were high. There were mosquito nets to prevent malaria, drugs to prevent AIDS, well-digging systems for water. But Ms. Katese told Jennie “We need something to make us happy.” Their vision became a reality and their journey was captured in the critically acclaimed documentary, Sweet Dreams.

Jennie told me that story after I asked her why ice cream is so important to her. She went on, “I think that ice cream has a great place in any society or world of just ‘I am going to indulge because I’m entitled, no matter who I am, no matter where I am, I am entitled to feel and experience joy.’ And as Kiki would say, ‘We all need to dream.’ When you sit in that ice cream shop you indulge and you give yourself just a tiny little space to dream.” It’s that spirit of compassion that drew me to her post on Nextdoor.

I’ve been on Nextdoor for about a week and I am inspired by how welcoming Upper West Siders are and how willing they are to help and support each other. As I’m writing this, Jennie’s post has received 167 comments and 331 reactions which are overwhelmingly supportive. Her post is not about condemnation and it’s not a war cry to reform the criminal justice system. She writes, “I wanted to give a face to our shop, to share the back story, and to say thank you. I can’t say how much I appreciate your support, and I can’t stress strongly enough what a difference every sale makes.”

It’s no secret that our Upper West Side rent is astronomical and harsh and unreasonable. But if we want to be proud of our streets and if we want them comprised of more than Duane Reades and Targets, we need to make an effort to take care of the businesses that form and represent our neighborhood’s identity. But effort sounds difficult. So, in the meantime, why don’t you give yourself a break. Head on over to Blue Marble, grab a cone, sit back and take a moment to dream. You deserve it.

Brooke’s Picks for Upper West Side Yoga and Cardio