Home
Real Estate
Ackman Sent Back to Drawing Board: Glass House Must Be Scaled Down 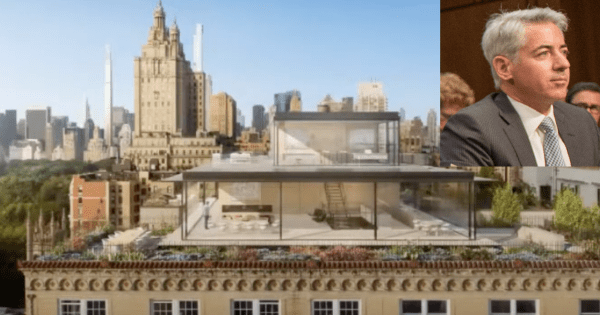 The proposed construction of a glass penthouse atop 6-16 West 77th Street is a no-go for now. Billionaire Bill Ackman’s project team argued their case before the Landmarks Preservation Commission (LBC) on November 16. They were told to scale it down, literally.

Unlike the equitable number of naysayers and supporters of Ackman’s design at the November 3 meeting of Manhattan Community Board 7 (MCB7), public testimony was largely against the hedge funder’s plan to build a two-story glass house at the co-op. Representatives who spoke on behalf of Landmark West, the Metropolitan Chapter of the Victorian Society in America, and Society for the Architecture of the City all opposed the potential construction.

Executive Director of Landmark West Sean Khorsandi noted that a committee of voting members were evenly split during a meeting in October. He reported that daily feedback has continued since. He urged LBC to deny the application, called No. 6-16 “overbuilt,” and added that a key part of landmarking is to have the actual thing and not merely a memory of it.

Ted Smyth, a 14-year resident of the 77th Street co-op, was cognizant that the Ackman family already purchased the current pink penthouse in his building. But that did not stop him from giving his opinion of his future neighbors’ proposition. “Not at all subtle, sarcophagus-like structure.” Smyth also expressed concern that approving this project will open Pandora’s box and alter the skyline along the park and historic district forever.

Similar sentiments followed with most maintaining that landmarks law dictates denial, that the glass design is incongruent to the current structure, and that the destruction of the current penthouse should automatically disqualify the plan. However, a few notable Upper West Siders spoke on Ackman’s behalf.

Paul Goldberger, former New Yorker architecture critic, asked the LBC to approve his “close friend” Ackman’s proposal as he did during the MCB7 meeting earlier this month. He cited the hedge fund manager’s glass boxes having the ability to respect history and blend it with the future.

This high praise from an Upper West Side institution gave pause to at least one Upper West Sider named Mary. She claimed that Ackman gave the Historial Society a million dollars and questioned whether his pledge for another $20 million bought the Society’s “glowing endorsement.”

Even though the majority of testimony opposed Ackman’s plan, LBC did inform him that he was headed in the right direction. The Commission did not formally vote on Ackman’s design, but Commissioner and Chair Sarah Carroll encouraged him to listen to the sentiments of the other LBC commissioners by lowering the house onto the rooftop and to consider a more horizontal quality before submitting any future schemes.