Upper West Sider Mike Matthews was recently planning to propose to his girlfriend Amy. And he knew he wanted it to be a momentous event, far from ordinary.

If these two names sound familiar, we featured the couple when they launched an initiative to give out gift bags to MTA workers, and Mike organizes a Halloween door decorating competition in his building.

Anyway, Amy knew Mike would be proposing at some point soon. In fact, a formal proposal (and a ring) were the only elements missing from their future. They had planned to take engagement photos this past Friday at noon, and they’re having a small wedding in Central Park on May 6.


Amy runs the labor department at her hospital, and Mike told us he’d be using her profession to plan the proposal. “For whatever reason, she’s NEVER had a medical emergency in NY outside of her hospital. You and me see people get hit on their bikes weekly, but it never happens, so she’s never had to rush to help,” Mike said.

He continued to tell us about his plan. “So, I reached out to NYPD and FDNY to see if we could set up a mock-scene where an actor friend is having a baby on the street or on the bus coming home from work. And, Amy is called on to help and then BOOM, I show up to propose.”

And that’s what happened this past Friday. At 10:30am, an hour-and-a-half before they were to get their engagement photos, the scene described above unfolded on 108th and Broadway, right near Mike’s apartment.

“At 10:30am, [Amy] arrived at Absolute Bagels with a bag of dresses to wear for the [engagement] photos. She was semi-mad at me because who does engagement photos WITHOUT BEING ENGAGED! As we stood outside in line for a bagel with our friend Justin, I showed him the fake Citizen app screenshot (I had a graphic designer create it). Then I showed it to Amy.” 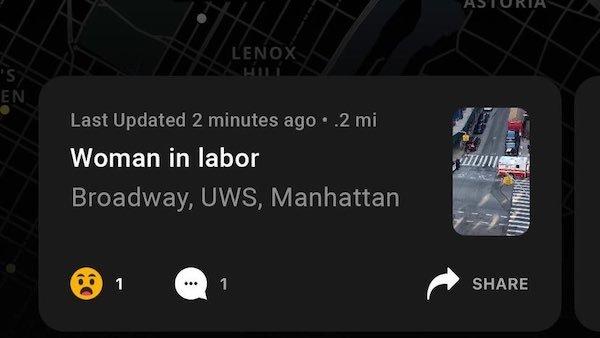 Mike continued, “Justin said he’d hold our place in line and we walked over to the scene where a friend of mine (that is actually pregnant) was in panic. As you can tell from the video, [Amy] went right into nurse mode.”

“My biggest regret was not recording the audio. I mean, there was yelling, screaming, and Amy was about to take her pants off and deliver this baby! My friend literally had to tell her “not yet!”, and that’s when she turned around.”


“Afterwards we bought lunch for FDNY, bagels for everyone at Absolute Bagels, and I showed her the Tan France (of Queer Eye fame) “apology video” back at my apartment, and we grabbed an Uber to do our engagement photos. What a day!”

Mike says that while they’ll be having a small ceremony in Central Park next month, they’ll be throwing a “blow-out party” in late December.

Two Upper West Side Streets to be Renamed