By the time “Only Murders in the Building” premiered on September 1, I was already a little burnt out on it. News broke that the show was filming on the Upper West Side in December 2020, and since the cast is lined with A-list celebrities that go by the names of Selena Gomez, Martin Short and true Upper West Sider himself, Steve Martin, this production was sure to garner a lot of attention.

Feelings of fatigue aside, I couldn’t resist watching it the day it came out. Probably for the same reasons I was so burnt out on it; the show has a ton of potential with this cast and I was nervous I’d be let down. Alas, I was successfully able to get through the first three episodes Hulu released, leaving all of my predisposed judgements about the cast, characters and story at the door. Easier said than done and maybe I’m kidding myself; but humor me for now as we kick this off, please.

After a dramatic opening scene, each of the three main characters has an intro monologue voice over during which they speak directly to the viewers about living in NYC.

I pulled out a key quote from each character’s intro as they nail living life on the Upper West Side of NYC.

Charles-Haden Savage (Steve Martin): “New Yorkers have a special way of communicating. And by special, I mean direct.”

Savage is getting flipped the bird by a neighbor as he delivers this line. What got my attention (if I can be direct) – is how Steve Martin’s character takes a bizarre (impossible) walking route around the UWS during his monologue.

We see his character walking westward over the intersection of Central Park West and West 74th Street in his establishing shot. He’s in between CPW and Columbus when his neighbor gives him the finger. Next shot, we see Savage rounding West 86th and West End Avenue as he looks up to admire his beautiful domicile, The Belnord, which they name The Arconia on the show.

Then, all of a sudden, in the same monologue, while wearing the same clothes and holding the same brown paper bag, he goes from 86th and West End back to Central Park West, this time on 72nd Street just south of the Dakota.

I’d call it a continuity error; an especially tough note for Steve Martin who lives at the San Remo right along CPW. Just being direct, neighbor (no middle finger).

Mabel Mora (Selena Gomez): “Don’t be here if you don’t like a lot.”

I think that’s what draws us to Manhattan and the Upper West Side in particular. This simple statement packs a lot of weight in a City that offers so much to so many. But the Upper West Side, with Central Park and Riverside Park on its outskirts, is in many ways a sanctuary from the rest of the city – a haven from “a lot.” At least for how many of us around here see it. The night life is low, restaurant scene quality but not packed with Michelin 5 stars, and it’s not really a ‘destination’ for a lot of people who live in other NYC neighborhoods. Tourists are another thing. There’s that old hipster line, “I don’t go above 34th street,” which I always loved hearing because avoiding that crowd is one of the core reasons I moved up here.

We see Mabel walk past Westside Market at 98th and Broadway during her monologue. Mabel and co-stars take the level of seclusion I discuss above a step further by living at the Belnord, or as the show calls it, The Arconia. Similar in style to the Apthorp and Astor Court building between West 89th and 90th Street, architectural critic Paul Goldberger writes “All of the buildings share the liability of courtyard apartment houses, which is poor light in all too many of the units, but they also share the ability of all good courtyard buildings to create far more than conventional buildings could a sense of a private, secure world.” 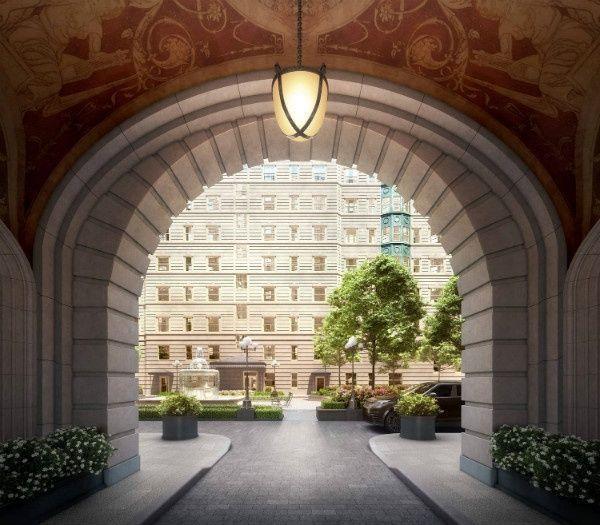 That description rings true as all three characters, like many of us, hide deep secrets from those closest to them.

Oliver Putnam (Martin Short): “And don’t we all feel like orphans here at times? Struggling to find our place?”

Nailed it, Oliver. NYC might be one of the only places where you could go from feeling like a giant on top of the world one night, to an insignificant nothing the next. We think we know it all, and then we don’t. Help! Someone! Please!

Putnam is cruising past the Capital One Bank towards the intersection at West 87th Street describing a beautiful analogy about how we’re all falling and bouncing up again, set to Claire De Lune. This took the cake for me, NYC.

A spokesperson for Hulu told The Wrap that “Only Murders in the Building” has set a new platform record as the most watched comedy premiere in its history.

Enjoy the show, it’s great. The fourth episode – “The Sting” – will be streaming as of September 7.

HBO Max’s “Love Life” to Film on UWS this Week