A newly formed organization supports the replacement of NYC’s horse carriages with electric ‘horseless’ carriages, and is calling on all NYC Mayoral Candidates to support the alternative.


The Committee for Compassionate and Responsible Tourism (CCRT) argues that this transition will defend the welfare of the horses without sacrificing jobs. The group’s founders, Susan Wagner and Elizabeth Forel, state that “The concept of electric carriages would be a win-win for everyone involved – saving the drivers’ jobs, creating new jobs in a whole new industry and finding good homes for the horses.”


The new organization was formed after Wagner and Forel – respectively of Equine Advocates and The Coalition for NYC Animals – grew inspired from a trip to Guadalajara, Mexico, where electric carriages began replacing horses in 2017. 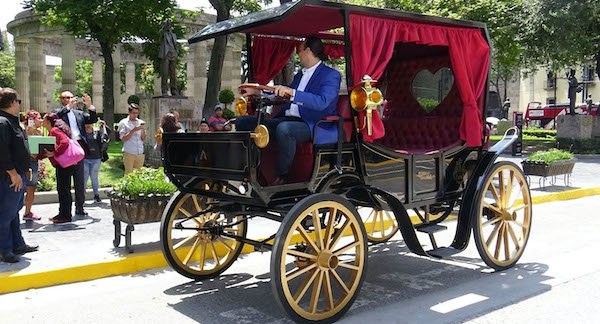 An electric carriage in Guadalajara, Mexico

According to a press release by CCRT, “The union [in Guadalajara] was pleased because the drivers were making more money by not having to pay for food, vet bills and caring for the horses and thus, were able to work more hours and in extreme climates. The drivers were happy because the carriages looked aesthetically similar to the original, minus the horses.”

CCRT does acknowledge that “implementing electric carriages in New York City does have its challenges, including the need for a city rule change to permit their use, funding to pay for them and charging ports to charge them,” but reiterates that other cities have made the transition.