A lot of Upper West Siders are getting pretty frustrated over their local Starbucks being closed. Yes, there are more important problems in the world, but to some, especially those who are in a hurry and need a caffeine fix, seeing these locations locked up has caused great distress.

“My day is ruined every time I walk by,” said Upper West Sider Eric. “I keep checking to see if they have reopened to no avail. You would think, they made it through the pandemic … and now they close on us? I’m annoyed.”

The two locations, one at 81st and Broadway and the other at 81st and Columbus, have signs up that say they’re temporarily closed, but don’t offer further details on why – or when they will reopen.

People continue to march to the stores to stare blankly through the windows with eyes of desperation. A whole bunch of folks even tried to open the doors, even though the lights are clearly out. 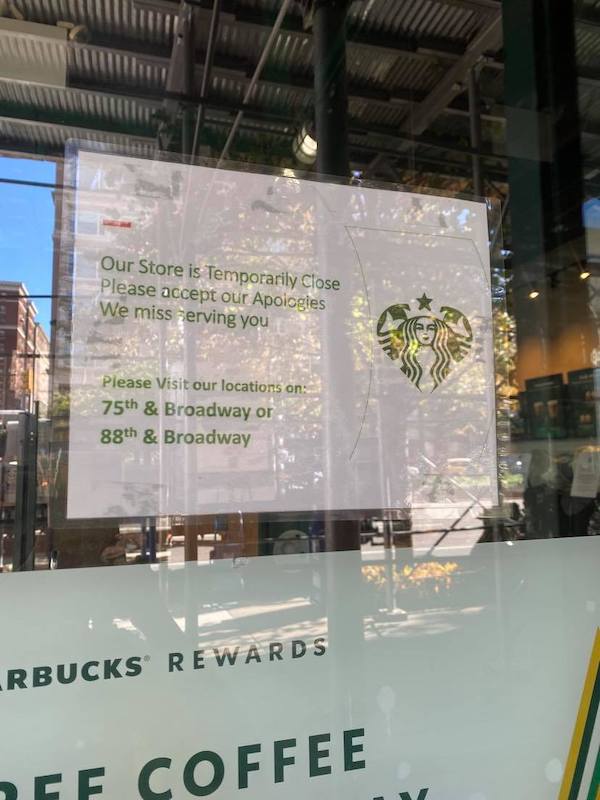 “I’ve heard they have staffing issues,” said an Upper West Side Starbucks customer named Gene. “There are many places that are having trouble finding enough staff to keep regular hours.” Staffing issues have been to blame for shutting down other Starbucks locations in the city, but a call to corporate debunked this for the two Upper West Side stores. A company representative told us renovations are taking place at the two UWS stores, though they were unable to provide reopening timelines.

“I was told that there were inspection issues at the 81st Street location,” said another local. “This was told to me by an employee at another Starbucks location. Kind of gross,” she said.

We called the 86th Street Starbucks and an employee told us they’ve seen an uptick in new regulars due to the nearby closures. Neither corporate nor the employee we spoke with at 86th Street could confirm when either of the two 81st Street spots would reopen. One local said they heard that they would reopen around Thanksgiving.

Others don’t seem as bothered by the closure. “It’s not a big loss, find a better coffee spot,” said local coffee drinker Joe. “Personally, I think the coffee is terrible and prefer other local options.”